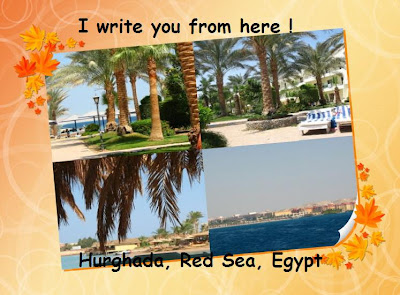 I can't show you these pictures without any explanations. Since the Soviet Union has split appart and is now composed of different little countries, people are allowed to travel since the borders are open. Unfortunately nobody had told them how a civilized person should behave in a hotel. Because they had to line up for everything in their lives, and fight for food and clothes it still is so much ankered in them that they do it outside their country too.

We the western people look at them with disgust and can't believe it ! When a group of "Eastern" people is in the hotel, you have to ask for little coffee spoons because otherwise they steal it and even for the butter because they take it too.

But money is money and Egypt lives mostly from tourists. 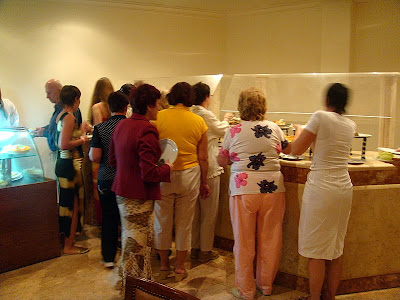 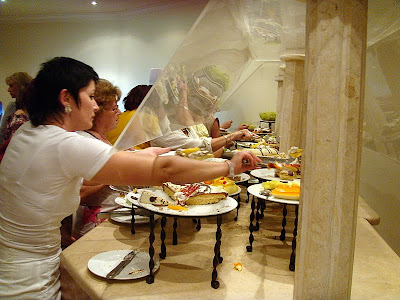 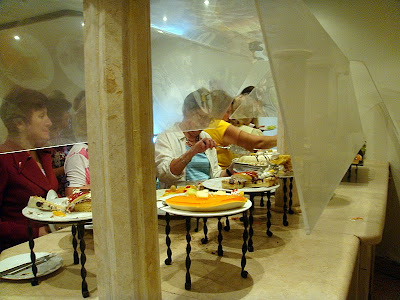 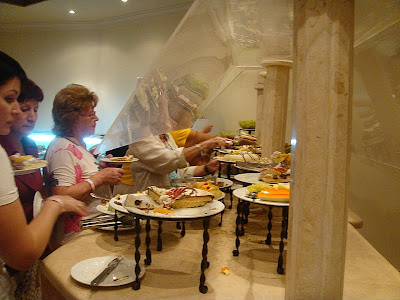 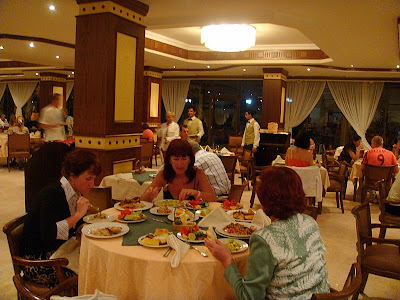 These are pictures "how to get your dessert" (some people took first the dessert and then lined up for the menu) or they put all together on one plate.
Posted by Gattina at 05:35

Oh dear, that's rather sad, don't you think? But I can imagine how taken aback one would be to be shoved aside by someone who puts their dessert on the same plate as their veges.

BTW, did they mind when you took the photos of them pushing and shoving?

::sigh::
Oh, well, I guess they were so concentrated on getting their plates full that they didn't even notice you taking those pictures!

Sadly, it will probably take another generation before they become adjusted.
Oh, I am guilty; I have been know to eat dessert first! You know what they say "life is uncertain, eat dessert first." haha, bad me!

Ohhhh my. They better never come to the overly- polite south (USA) or they might get asked to LEAVE the premises, even in a big touristy place like Myrtle Beach!

My but the desserts look delicious!
When you haven't had I guess it's hard not to believe it will still be there when you come back. Maybe that's why they load it all up at once - not believing there's more waiting.
Hope you're having a great day.

It is sad that old habits die hard. But then I noticed some people who eat like that at Old Country Buffet and they have never been out of this country.

Just goes to show that the clash of cultures can be funny too ...

Well, it's sad really... that they still FEEL like they need to grab and "stuff"... and steal. But like you say - it's just so ingrained in them... Looks like a fabulous spread though! I might "grab" a little too! ;-)

So funny, Gattina! You made me laugh.
They've seen you arriving, so they quickly, empty the buffet lunch before you and Chantal help yourselves! That's a battle to survive.