WITH EUROSTAR TO THE UK

Later today I will take the Eurostar from Brussels to Ashford. It will take me about one hour and a half. Then I have to change the train and take one from Ashford to Eastbourne where my friends are picking me up. 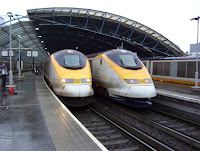 The Eurostar (read history here) exists since November 14, 1994 when our King and Queen inaugurated it. (THE QUEEN too of course)!

Two weeks later I also used it for the first time to visit my son in London. Of course everybody told me that I was crazy and it would be dangerous to go through a tunnel which was built under the sea and I should think of all the water and ships above me. I have to admit it was quite a strange idea travelling under water ! But it was a wonderful and smooth trip without any problems. Since then I have taken it many times.

You are only 20 min in this huge tube which is the tunnel and you don't see anything of course but the walls on each side and so close that if you could have opened the window and stretched out your arm you could have touched them.

This train allows up to 300 km/h (186 miles), but you don't feel anything only that the landscape runs by very fast and you can hardly see the cows (Belgium) and on the other side sheeps (UK).

Of course the train has become a big competitor to ferry boats and airplanes wich were needed to go to the UK. But now it's so easy, from Brussels to London it only takes about 2 1/2 h and you have to be at the station half an hour before departure and not 2 or 3h like for the airplane nowadays. For me it's even shorter to Ashford it will only be 1h 1/2. The train only stoppes in Lille (France) and in Ashford before arriving at its final destination London.

If I have time on sunday I can certainly tell more about my trip. Considering that I have to change train I never know (with my wonderful orientation sense) in which city I will finally arrive ! Maybe I can write you from Manchester or Glasgow ??

Oh! I came to visit if you had posted for the theme's week, but look, you're traveling again. Hope you have a good time. Take care.
Thanks for the visit.

Have a good time! Never fear, I'll rescue you if you end up in Glasgow!

I don't mind tunnels much...I just don't think about the situation itself. A trip is always a wonderful experience, if you visit friends it is even more so.
Have a great week drinking tea and have a scone for me, please :)

Sounds like it's far safer than crossing bridges in America! Though as claustrophobic as I am, you would NEVER get me IN it! HAPPY TRAVELS to you though, my friend!

have fun in your trip gattina :) i hope there will be good weather :)

Have a fun time and who cares if you end up in Glasgow - in that case you can go further up to the beautiful Highlands!

How lovely - I wish you a great, lovely, relaxing and of course a safe trip! Please keep us posted!

I think I would enjoy traveling with you.

Hi Gattina Have a wonderful wonderful holiday.Please dont get lost but then thats half the fun finding out you took a wrong turn.I see Pookie belw dressed ready for a her trip.

I love trains and want to do some of the world's best train trips. The Eurostar will be one of them.

Enjoy your holiday, Gattina and we look forward to hearing about and seeing photos when you get back.