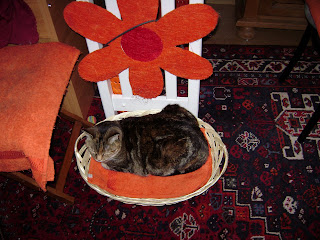 Yesterday I found a letter from the german tax office. Getting letters from a tax office are seldom something nice. But in this case it was. Mr. Gattino got a pension raise !! He had worked in Germany beginning of the 60th for exactly 3 years and therefore has right on german pension. Now in the context of a European community you have the right to claim a pension from every European country you worked before.

After almost one year of letter exchanges and signatures and stamps, he finally got the enormous amount of € 59 pension per months from the German tax office. But one should not complain, money is money and it's better then nothing. And now the amount had increased ! How wonderful. I looked on the printed formular and saw the number 30 ! Wow, I thought 30 € that's a lot ! But then looking closer it was exactly 31 Euro cents per months of course.

In order to get this enormous amount every month he had to prove that he was still alive. There was no doubt with that, because I heard him swearing in the basement. To get this proof officially he had to fill in a 3 page long formular, sign it and then go to the Waterloo administration with passport and residence proof to get a stamp. That's what he did. Usually he would have sent me, but this was impossible because he had to show himself alive.

After having spent 1 1/2 h at the administration office, he finally was now sure that he was still breathing and very much alive and it was even officially recorded. He then put the 3 page long formular in an envelope, sent his wife (me) to the post office where I payed 0,80 cents for the stamps and could finally post it. 80 cents that's almost 3 months of pension ! And the tax office had extra expenses too and all that for 31 cents !

But in some way it is nice too. At least now one of us can pee in a public place once a months and the pension pays for it.

Hahahahaha! Aren't governments the same the world over. Spend a fortune to give you peanuts!

Still, I loved your interpretation of it and I'm so glad Mr Gattino has found out he is still alive!

That's almost the same here. People make a long line to get their pensions and just to find out or rather told to that their off line. Isn't this just so crazy?
Thanks for the visit.

hahaha... Gattina, that was funny.
And you wrote a hilarious account of it. You go, gal!

My regards and congrats to Mr Gattino！

I am laughing over here! Liked the creative kitty basket too!

Great, kitty basket!! That's darling. Anything for our beloved pets, right? At least for me and mine.

Now 'bout that raise. I have to laugh, but hey --I am married to a USA government employee [hubby worked for the tax payers for years, 'til is was top on the seniority list, and the red tape and government bureaucracy is something to laugh at.] Actually, you HAVE to laugh -otherwise we retirees would go insane.

Ohhhh my gosh! What lovely red tape! You know what amazes ME most about this story? (having NEVER been to Europe myself) Krysti DID tell me when she returned about having to PAY to use the public restrooms over there. Now this completely FREAKED HER OUT because she has NEVER known a pay-toilet in her entire life! But I do remember when I was a child we had to pay to use public restrooms here in America too -- but we have not had that since I was maybe 10 years old! All restrooms are free... though many are so filthy you do not WANT to use them!

hahahaha :) this is so funny and so true! which reminds me-- hey the public toilets there are cheaper than here :) we pay 50 cents here in our area and at the train station it costs even more - 70 cents!!! that's almost 2.30 months of Mr. Gattino's pension increase.

Congrats on Mr Gattino's raise!!!! let get back what we had been paying for years :)

hi Gattina loved Pookies basket so creative , hahaha Poor mr Gattina had to go prove he was alive and kicking that was funny....

Ah, government! Prove you're alive. Hmmm. Here, you must prove that your loved one has actually dies to receive some benefits. Sigh.....

Pookie looks most comfy in her basket!

you heard him swearing in the basement. .ha ha ha h aha

that was a classic

Is this only for residents of the EU? My Hubby lived and worked in Germany for 11 years. He paid German taxes. He is nearing 70 and wonders if he too can collect money enough to pee!