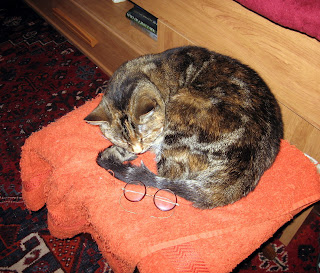 Pookie is very proud she got Potter glasses ! 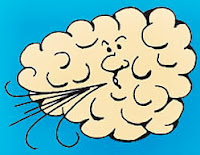 HARRY POTTER AND I 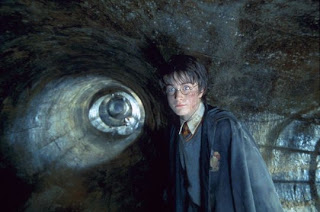 I am more and more convinced that I am not in the wind anymore ! I am getting old ! Can you imagine that I never read a Harry Potter book, or watched a HP movie ?? I wouldn't even know who he is if the television wouldn't talk about him every day since the new movie came out and now even worse the new book ! Wherever I look there is Harry ! (not the prince but the Potter) In newspapers, in magazines in shops on Internet and on blogs. Harry's, with round rimmed glasses decorated face, looks at me everywhere except on public toilets so far. I just can't escape. 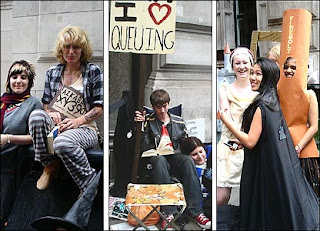 Friday a heavy Harry Potter wind or rather storm blew over the whole world. The new book would be on sale from midnight on ! What did I see at TV in the evening, long lines of teenagers sitting in the rain on the street and waiting to buy the new book ! Everybody wants to be the first. Apparently it's already the 7th book and they say it will be the last ! How awful !

The only thing I know about Harry Potter is that a certain Mrs. J.K. Rowling has written all the books and that more than 300 million copies of the six Harry Potter books have been sold. From a poor housewife she became a millionaire just by inventing a boy who is a witch ! I always thought witches were females but I learned ! A male witch is called a wizard. Anyway I don't know if he travels on a broom or a bicycle or maybe now that he is 18 with a car ?

How can I continue my life as an ignorant woman without Harry Potter ? I am full of inferiority complexes now, such a lack of general knowledge and education ! He even gained the Vatican's seal of approval in 2003 when an official said the books helped children "to see the difference between good and evil". That means even the pope has read the books ! I wonder if he queued up in the rain to get the new book ? At least he is more in the wind then I am. 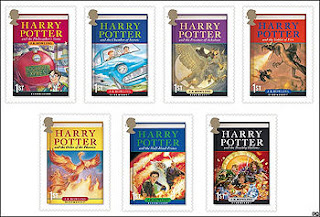 Now I have the choice or I buy these books and read them and also watch all movies or I have to shoot myself ! That's a question of honor !

what a wonderful take on this week's theme. I haven't read Harry Potter either but am tempted to because that is all I have heard today! Have a wonderful MM.

I fell under the Potter spell with book one and sat down with book number 7 and read straight threw.

You can fudge a bit and just see the movies, but the books are so detailed and it is a wonderful story that can be read by children or adults.

it did seem to be a big deal, didn't it?

My husband adores the series and is currently finishing up #7. I'm not as enamored with them as he is. I didn't like the way things were going in #5 and put the book aside to read other things. That's where I've stopped.

If you are curious, get the first and see what you think and go from there. You probably have friends who have a copy and would be willing to loan it to you.

Don't feel like a stranger...I haven't read them either or seen the movies. The only reason I might is because a couple of people I admire really enjoy the books. And I loved Grimm's Fairy Tales...
Have a good week!

ROFL! Will she cave? Or won't she? THAT is the question! If you disappear off the Blogosphere I will knOw what you are UP to!

I've not read any of the books myself, but I have seen the movies, and they're all so redundant, I can't get excited over any of the new stuff.

But, personally Gattina, I don't think you're missing out on anything spectacular....but of course, I know 8.3 million bought the new/last book over the weekend....at $35 a book, the author is more than happy 'bout it!!!

No don't shoot yourself Gattina, it's messy and it might hurt. Best buy the Harry Potter books and read them...then you might learn some spells to help Arthur's tail...heheh!

i myself was not blown with harry potter wind but since its jkr last book i decided to get a souvenir. i have now my first and last book of harry potter.

It's not the boy that is compelling about the books, its the world he inhabits. A true break from life as we know it. Sort of like soap operas, or musicals are.

I was a late comer to Harry Potter, but I have enjoyed all the books and almost all of the movies. It has brought out the child inside of me.

I am probably the only person who hasn't read the books. I did go to one of the movies with hubby. He woke me up when it was over...LOL!

I too haven't read any of these books or watched any of the movies. Nice job as always Gattina. Have a great MM. :)

We´ve been in a restaurant tonight. Guess what I found at the toilet: A HP movie poster *LOL*

My daughter is the Harry Potter fan in our house; I've never read a single book myself and am not sure if I ever will. Maybe someday when I have more time?

Some magicians seem to have replaced my hooman mommy´s real face by the 7th Harry Potter book. As soon as my hooman brother Luis sleeps... mommy sinks into the book, Miss Gattina!

I know nothing of the Harry Potter books either, I sure hope you don't shoot yourself. That would be a great loss. You are much more important than Harry Potter. connie from Texas

Certainly not worth shooting yourself over but I found them entertaining if a bit juvenile in content. I have enjoyed the movies but then I like that kind of mindless watching so I found them entertaining. I did not follow it from the beginning only in the past year or so and it was easy to catch up. Plus my 16 year old and I have something to discuss!

I haven't read any of the books or seen any of the movies either. ;) Great post, happy MM!

Not me, i won't read them, won't watch the movies either, all devil worship and magic, NO THANKS!!! Please don't shoot yourself!! PLEASE oh PLEASE!!! I would miss you and your take on news and world issues so much!!! Besides, who would I tell my snake story too!!