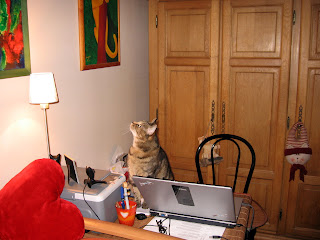 Pookie just has missed a moth !

Last week I wanted to go to the new Ikea which had been opened in Brussels. We already have one but I had never seen the new one. So I called my friend and asked her if she would come with me. But she had no time and I decided to go alone. She explained me the way, that it would be very easy and I couldn't miss it. Now I have to say I have no sense of orientation at all and it's even a miracle when I find my way to the toilet. Even on a straight way I manage to mistake.

I followed the way she had indicated to me which was the motor (high) way until Anderlecht and then go out there on the chaussee de Mons. I drove and payed attention and for once I didn't miss the right exit. I looked up the street name, and yes it was the right way. She had told me that as soon as I am on the chaussee de Mons I would see Ikea right away. What I saw were houses, buildings and shops, Anderlecht is a district of Brussels. When after a few miles I arrived at an Underground stop I thought that's impossible, I must have missed Ikea, I was too far in the city and Ikeas are always a little outside. I returned to my motor way exit stopped the car and called my friend. I told her I didn't see any Ikea and that I was on the right chaussee. She couldn't understand that I had missed it and said to return again and then go under a bridge and then it would be right after the bridge. That's what I did. But I couldn't see any bridge. Finally after a long ride I saw a bridge and noticed with horror, that I wasn't on the chaussee de Mons anymore. I decided to follow my instinct which is always wrong. If it tells me to go right I better should go left. Finally I saw from far the South station of Brussels and realized that now I was completely wrong. I tried to go back and find my chaussee again. Suddenly I was along the Brussels canal where I hadn't been since at least 40 years !

I stopped and asked a lady who just came out of a shop. She didn't speak any french, she was spanish. I drove a little farer, stopped and asked a man. He was arab and could hardly understand me, but showed me the way with his finger. To my big relief I now saw that I was on the chaussee de Mons again. After quite a few miles I finally arrived there where I had started from and still no Ikea in view. I asked again another lady she was flemish and only spoke dutch. It was my day. But I understood that I should go in the other direction go under the bridge (a bridge !!) and on the left side would be my Ikea and it would be impossible to miss it. That's what I did, not very convinced but what did I see in long, large and big ? Ikea ! right after the bridge and indeed it was impossible to miss it if I had turned to the left instead of the right side when I left the motorway ! But again I had followed my instinct. Mr. Gattino told me that it would be completely normal that when I wanted to go to the Northpole I would certainly arrive at the Southpole and unfortunately he is probably right.

I myself have no sense of oritentation whatsoever either! That's why I have kept Mr Mar (a walking compass) all these years! But now I have a GPS in my car, that might change my whole life perspective :)

I haven't been to IKEA in over a year and it's all in purpose: I always find too many little things I can't live without and when I am home I have to do wonders to place them somewhere...

What a descriptive piece of writing, Gattina...and very funny. Let me know the next time you try and visit an Ikea and I'll keep an eye out for you in the Ikea store here...lol!

I took three years of French in high school 40+ years ago. I can only pick out words in the above comment and can't put them together in sentences! I lived in Southern California - there are hardly any French speaking people here. Everyone speaks SPANISH! My dad tried to tell me...
I love your story. It can be SO exasperating to be lost!

Hmmm.... Sounds suspiciously like my spouse. Lucky to find her way from the bed to her chair. Don't worry, You are not the only one afflicted with this syndrome.

Oh Gattina! I can sO relate! Actually ... my sense of direction is pretty gOOd these days -- but back in my younger days my head was all turned around backwards or something! When I lived in Minnesota - I lived in St. Paul at the time, and I went on a job interview into Minneapolis - (twin cities, right? Right next door to each other!) I got TO the interview just fine -- but you know how directions don't always work in reverse? Well! On the way home I ended up in Osh Kosh, Wisconsin!!! I was one verrrrrrrry lost young lady! LOL!

So... did ya get anything good? Krysti and I spent LOTS at OUR Ikea!

I think it's brave of you to even venture out on the motorway... I take no chances - unless someone (with a sense of direction) can drive me, I go by bus or train...

You're lucky everyone was so nice in helping you.

I once got lost on a race course. That was fun. I admire your ability to stick with it. I would have gone home and felt sorry for myself!!!

Hi Gattina. pleased you found Ikea, you only have to turn me around and im lost.when I travel on my own I have the map on the other seat showing the way im going highlighed in bright pencil.

Well I just wanted to let you know that I am another person that gets lost really really easy!! One time my cousin and I left Illinois and drove all the way to TEXAS!! We neither one have ANY SENSE of direction...guess what we made it and made it back home too!! WE had the BEST time!! It was a trip we both will always remember. We laughed the whole trip!!
I wish that we had an Ikea here. Savannah wants to stay historical so they do not let a lot of stores come...so we miss out a lot on new things!! I bet it was fun..ONCE you got there..Thanks for stopping by..
Sandy

We women just have our own way of getting to where we want to go. Nothing wrong with that is there? Sorry about the moth miss though. Have a great MM with Mo. :)

I enjoy shopping at Ikea. A bigger and newer branch just opened near my house. It was packed with shoppers!

Hi Gattina!
I have tagged you.I'm tagging bloggers I don't really know. I hope to know you better through this. Read my latest post. ^-^

And yes, I love IKEA, too. Everytime I´m visiting IKEA just to buy some "tealights" I end up the same way you did when you wanted to buy some rice. Tealights are so so expensive. =)

A very well written story about how to find a new IKEA store. You did find it. What did you buy? A new kitchen? A bookshelf or a cheap luncheon?

Have a wonderful week. I'll do what I can to post COT - but it's my first day on job after an extrodinary vacation;))

I loves me some Ikea!

I have a really bad sense of direction so I can relate. :D