I think we had the hottest week since the weather is recorded !

On Monday I went shopping because the weatherman had announced 40°C which had never happened in Belgium. When I came home I thought I am stupid, I should make my shopping when it is really hot, because our garage is cool and the car therefore too and then I have the airco in the car and afterwards in the Supermarket ! But now I had everything and continued the day on my terrace where a little wind blow and it was nice but still hot.

The next day we really had the announced 40° usually the weatherman is often wrong,  and although I don't really have a problem with heat, this time it was too much. 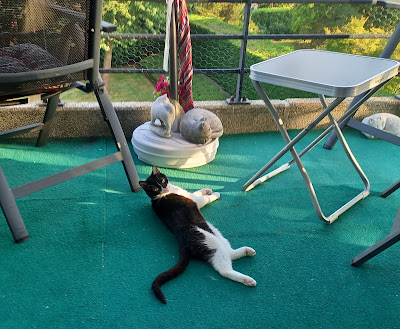 Even cat Rosie who likes it warm, found it a bit too much !

Finally I couldn't take it anymore, took my car and drove around. I took a few nice pictures, nobody was on the streets, I saw cows running because they thought I would feed them and I was happy that there were still farmers and cows in my town, but not many anymore. After almost 2 hours I drove back home. I didn't visit anyone because in every house it was  hot. Nearly nobody has air conditioning except the supermarkets, a few shops and a few wealthy people.

The next day it was grey and sticky and hot. I thought it is the time to do things in my computer which I hadn't done, like back ups etc, because then I didn't have to move. I only had to take the phone.

Belgium celebrates its National today on July 21 and for once I am lucky, I will be able to see the firework from my terrace, because it is made just one street further on the parking of a Supermarket. I told everybody if they want to come and watch they are all invited, a better place you couldn't find !

I don't know if it was the heat, but I was really in a sad mood. I decided to continue to clean Rick's computer, because I want to sell it or give it to someone in need.

All documents I had already in my computer, and there were very few photos.  Only from me, from his cat Arthur (a whole file) his father and grandson Toby.  Nothing else not even his sister or niece. He used to sent all photos to me so that I could file them. I found this one only, so funny ! 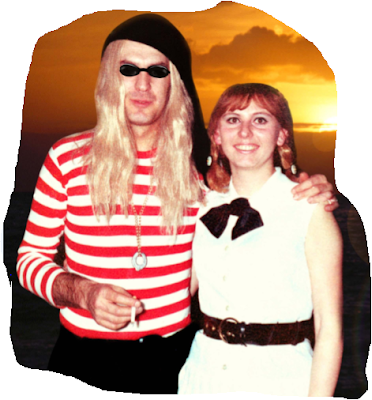 It was taken in 1968 shortly after we met each other and taken at a carnival ball.

and here are the young "tourist hunters" of the Garda Lake, Rick and son doing Judo and Rick's Dad, who was called the giant because he was 1.98 m tall and even for Northern Italy unusual. He had to have a tailor who made his clothes and also the shoes had to be made, because these sizes didn't exist at that time !

I want to do aqua gym again and drove to my old aqua gym club, I had read that the management had changed.

It was almost 3 years I hadn't been there and it had changed indeed. New furniture and everything looked clean. 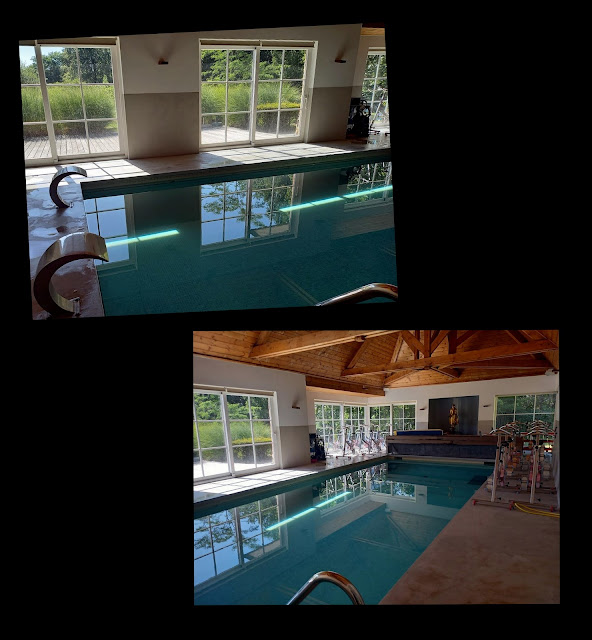 Nobody was there so I took the pictures and decided to go there when the school holidays are over which means end August. I hope that by the time I feel better, but I am aware that I can't lock myself in and avoid people forever. I always fear to be hurt.

The whole day the National day was celebrated in Brussels, with military parade, the King, Queen and the four children watching in front of the royal palace 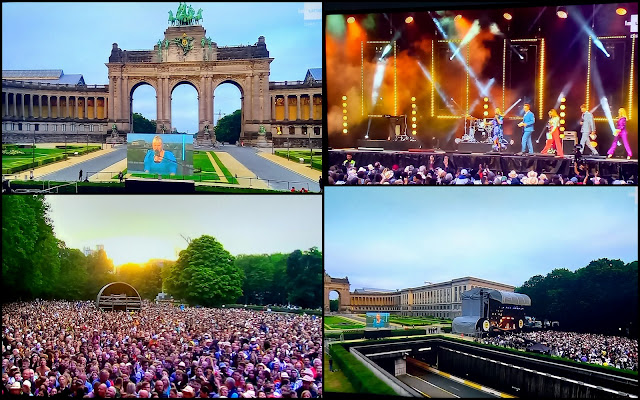 At the Cinquantenaire which was built for the 50th anniversary of Belgium. There was a big concert with Belgian singers and I was surprised who was Belgian, I always thought they were British or French ! I watched a bit on TV and then my guests rang at the door.

Since the afternoon here in Waterloo was a big fest after 2 years of lockdown ! It was just in the park across "my" boulevard, but I didn't feel to go there although there were many I knew and who had asked me to come.

But then at 11 was the firework and the daughter of a friend came with another young woman to watch the firework from my terrace and it was real nice  ! What a view and without the crowd around us ! We were sitting comfortably in our chairs and watched. 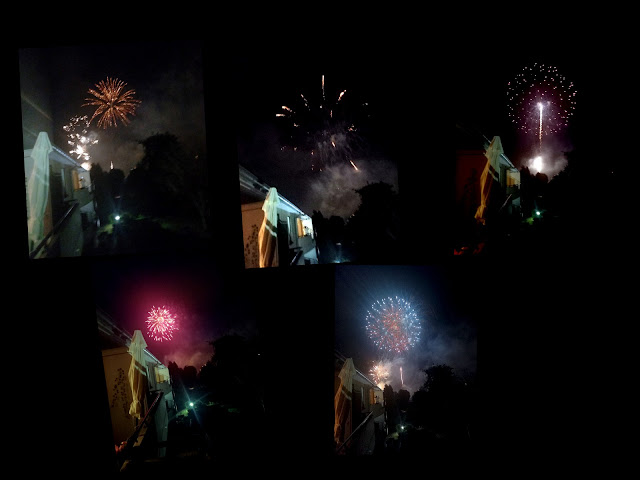 You can even see my parasol !

Then we had a glass together and they went home and I to bed.

more participants at Susanne at Living to tell the Story.
If you have difficulties to comment, just scroll down to :
Subscribe to: Post Comments (Atom)
click on it and then you can comment !
I have the same on other blogs and it took me quite some time to find out !
Posted by Gattina at 10:37