Du ring the weekend I had decided to rest and forget all my problems, but despite all efforts it remained in the back of my mind. I felt so exhausted and Monday hadn't even started.

To spend my time I thought I will disturb a little the sleep of the employees of the Health Insurance and also the administration of the Hospital. It worked ! I only wanted to fix an appointment with the health insurance once again, and also the pin and puk of Mr. G. account, and while I listened to the female voice who during 10 min explained on which button I had to push for this and that, I tidied up my kitchen, made my bed and poured a second cup of coffee before I finally had a living human on the phone. Then I started with my problems always being sorry with the poor girl who must be overloaded with work and near a burn out, with the result that she made roll overs to note everything I wanted and I got already the pin and puk when I came home ! Employees like if you pity them because of their huge amount of work ! Which is not always the case but more and more we have to do everything ourselves on internet. And there is a lack of employees, but too many without work ! It's hard to understand like the rules of the COVID lockdown.

The same happened in the afternoon, this time with the hospital she linked me to the pediatrics instead of geriatrics. I had to laugh despite everything, and asked the lady on the phone to connect me with the 80 year old baby. There was a silence and she said that I am in the wrong service, yes I answered I suppose because I have asked for the geartrics. And then we had both to laugh. That's better than being angry, it's all the administration's fault. In the evening I had the impression to have done nothing and fell in my bed.

Scrabble day was nice again but instead of scrabbeling we were bubbling, as it was so warm and we all felt so lazy. Besides that Nicole had again started a Chimeo and was a bit tired ! It's amazing, she never complains and really looks good.

My worst fear the tax declarion, resolved by itself ! After having worried and probably slept badly because I had no access to Mr. G's documents, my former neighbor who had listened to my problems, told me that she had an appointment with her accountant in the afternoon and that she would take my papers with her. In the evening she came back with all my documents in double, filled in and the only thing is to sign ! I was so relieved and happy ! One worry less ! How wonderful it is to have good friends.

Our Restaurants are open now inside and outside ! So we absolutely wanted to go to the restaurant where we had been the last time before the lockdown and now that it is open again we started with the same with the appropriate name "LA DOLCE VITA" (Sweet life)

We only had Spaghettis because they were not ready yet for full service after having been nearly a year without any work it was a big joy for everybody to meet again. The cook recognized me immediately and greeted me in Italian. It was really nice ! There are still some hystericals who didn't dare to go to the restaurant the first day. Corona virus is very intelligent, he comes the first day but not the second ! 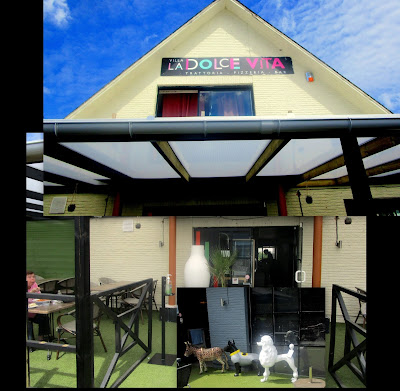 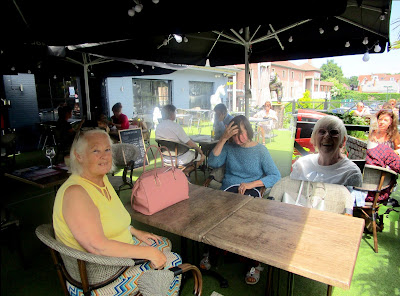 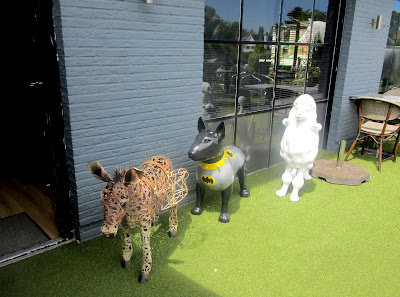 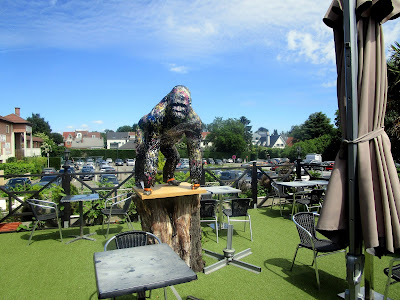 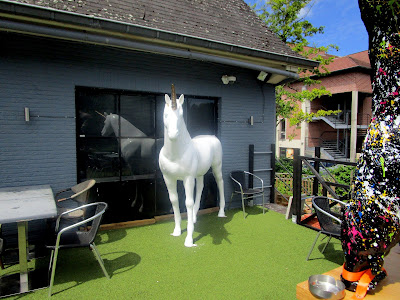 and the new decoration

I am glad that restrictions are been lifted so that you were able to meet friends for lunch. It must be so hard trying to sort out all the paperwork/insurance for Mr G but at least you can have a laugh about it.

Nice that you got out for a meal. Dealing with our social security department can be a nightmare. But those with enough money to pay a private company can receive benefits without all the paperwork. There are often professionals to smooth the way.

Yay for your country opening up!!! Here in New York State we only have to wear masks if we are unvaccinated and although I'm fully vaccinated as are my daughters and hubby i have to wear mine while teaching. When the kids leave at 1 we can remove them.

Have a good weekend!! Hope your husband is on the mend!!

Yes, it is better to make the workers laugh instead of grumble at you. You get better service. I hope Mr G, that 80 year old baby, can come home soon.
Yay for getting to eat inside at the Italian restaurant!

I'm glad your restrictions are easing. It must have been lovely to get out to eat. Sorry to hear about all the problems with sorting out the tax and insurance paperwork but sounds like you have it sorted now. I hope things are improving for Mr G.

Glad you are back to normal. Like has a way to continue own . We just have too find the fun in it.

It's a pain take care of of paperwork details online these days, especially medical ones. Glad you got some answers and some help with taxes. I agree about it being better to find the fun in something rather than getting mad at people who can't do anything about the problem. It's nice that restrictions are lifting.

You sound exhausted. I can relate.

I like that unicorn. And it looks so real as well. Well, as real as anything mythical can look anyway.

Glad you had some help with those tax papers. So nice that your neighbor offered. Awesome that your restaurants are able to open again. It's a blessings to be with friends enjoying a good meal out.