On Monday my ancient neighbour for 14 years came for a visit. Meanwhile so many things had happened !

She had moved away before us, because she unfortunatelyhad married a mentally sick man who separated her from her family, was a champion of manipulations, until after nearly 3 years she managed to escape in her bathsuit, she was supposed to go to her acquagym,  and  refuged to one of her brothers.

In the meantime she is divorced and lives again very close to me in another small town where she is closer to her children and grandchildren. So we had a lot to talk because meanwhile she had gotten 3 other grandchildren from her youngest boy whom I knew when he was 14 and lived with his mother in the next house and her daughter who studied at that time in Brussels. Now she is happy again although a bit bitter that she was so naive to fell in the trap despite the fact that everybody who knew her had warned her ! Most important is now it's over !

The next day another ex neighbour came I knew her since a very long time her husband and I worked for 10 years together. We mostly talked about the vaccin which so many people refuse and the shortage we have due to bad management. I got now an "invitation" for a vaccin but both towns which they proposed to me had run out of vaccins. So I am here with the convocation and can't get an apointment ! I loose so much time on the telephone because their internet page didn't work either, what a mess !

Meanwhile the population has filed a complaint against the State of Belgium and had won, because there were too many restrictions made against the law which took our freedom. After one year of lockdown the restaurants are still not open and we have curfew between 10 pm and midnight it depends where you live and many other strange things which have nothing to do with the virus.

Summer broke out and for the first time I was laying on our balcony and enjoy the warm weather. Mr. G. is still in hospital and I can't get the information if the last test had been done or not. So there I hang on the phone too and try to push them a bit. 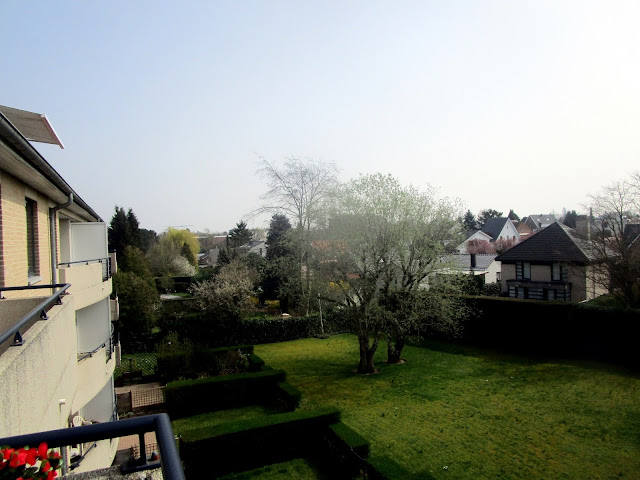 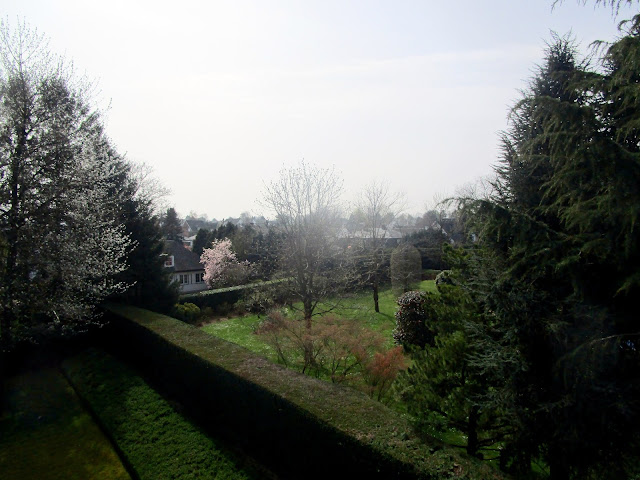 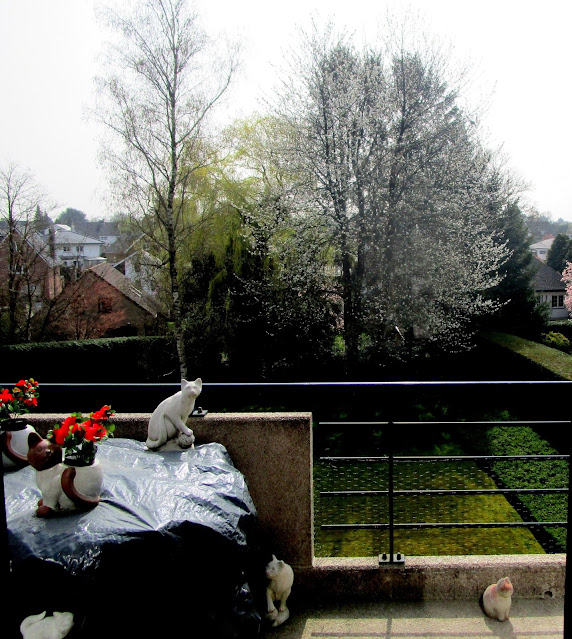 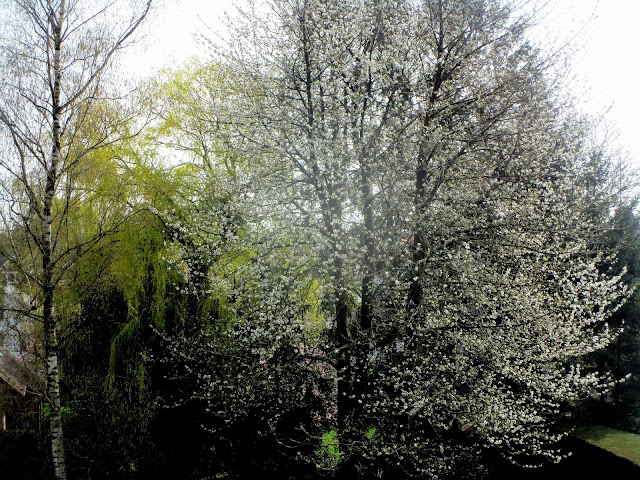 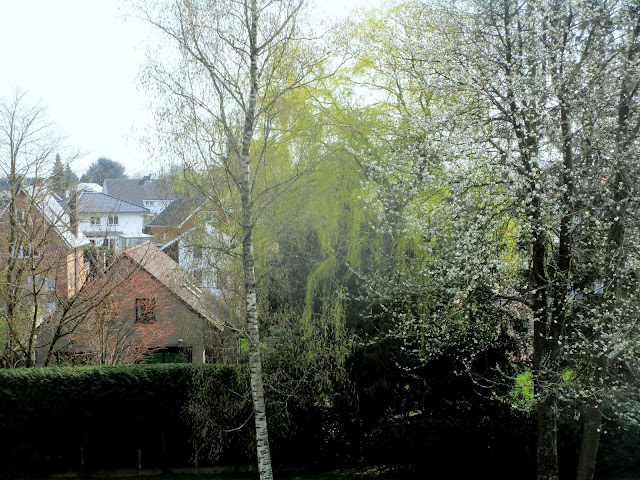 When we moved in I never saw houses from our balcony. When autumn and then winter came, to my surprise I discovered a like a village looking houses. Now that spring arrives the little village disappears again behind the blooming trees. 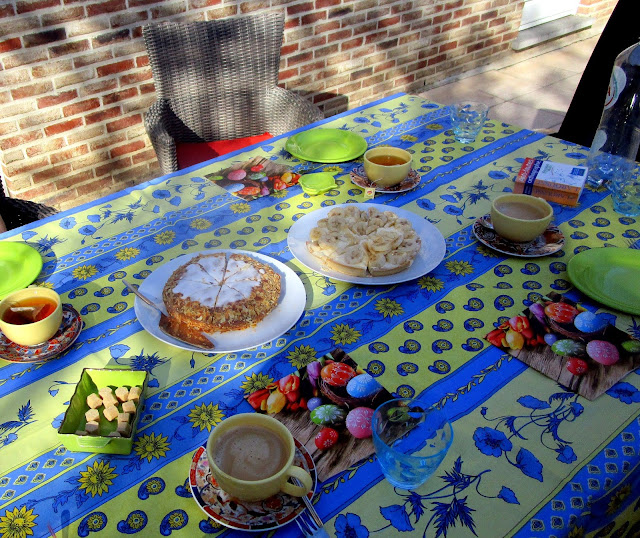 This was after scrabble !

We also had our Scrabble for the first time this year outside ! It's a pity that the weatherman announced cold weather for easter ! We will go again from summer to winter !

I finally got an appointment for the vaccin but quite far from here in our Clinic they ran out of Pfizer vaccins and have nothing anymore and now I will get the other one I always forget the name which several countries had refused because it was dangerous and now suddenly it is not anymore ! They ran out of stock that's simple. Had to find an excuse. I think all vaccins are the same and I never heard so far that somebody died of a Corona vaccin !!

For Easter Rosie got a new cat tree ! Of course she doesn't like it (yet) one day she will, cats need time. But for the first time this year she stayed outside and looked down on a black cat ! 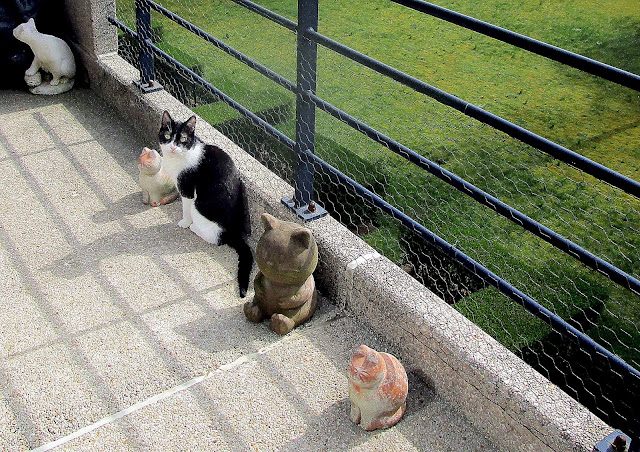 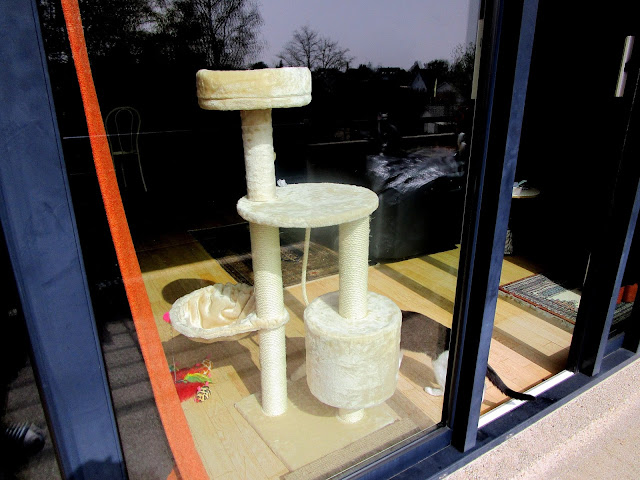 Now I am curious when she finally decides to climb on her new tree !

Great and large photos. No need to click. I remember you writing about your friend and her life. So great that you moved somewhere easier to live in, disappearing houses or not.

I hope you had a wonderful time catching up on all the news wth your former neighbors. Sounds like the man she married is an abuser!!! That's the kind of man to stay away from!! Emotional abuse is horrible.

Praise God you are close to getting the vaccine!! I've heard it's very difficult to obtain n Europe.

Look for the blessingsmin your life and you will find joy, Happy Easter!!

Nice that you could visit with your friends. Your vaccine situation sounds like Canada's. My husband's appt has been cancelled twice because no vaccines were delivered for one reason or another. Love your views and the picture of your kitty joining in with the statues is cute. Have a Happy Easter!

In a few days Rosie should be used to it.

Yes the weather is unpredictable here too - they've even mentioned the possibility of snow here this weekend. I hope you can get your vaccine soon.

Wow lockdown for a year but It doesn't sound as strict as ours. By the way our three day lockdown is over. There was mass testing and contact tracing and everyone has been found. There are 1000 people in quarantine for 14 days but everyone else is free again but with some restrictions. Mask wearing in public buildings and transport, no more than 30 people in your home . Good news about your friend. Sad to hear about the problem with vaccine supply. We have it too. I can't understand people moaning about their freedom taken away. It's better not be free for a while than be overrun with a deadly virus. I'm so glad Queenslanders did as they were told for three days so that we could open up again. I hope you get Mr G's results soon.
Take care and enjoy spring.

Sure some pretty photos and sure she doesn't be come involved with a person like that again.
Coffee is on and Stay Safe

It's good that you can see your friends. I'm glad the one is safe with her family near.
We can't get an appointment for vaccine yet, either.
I hope Mr. G will continue to improve on the medications.