The weekly Scrabble on Monday was very much reduced, from our club of five,  two were sick, but not as it should with the Coronavirus, but with an ordinary cold and kidney aches.

So Nicole and I went alone to our friend who lives near Brussels in Nivelles, which is not far from Waterloo. We played at three, I lost once again and Sheena Chantal's dog was watching us ! 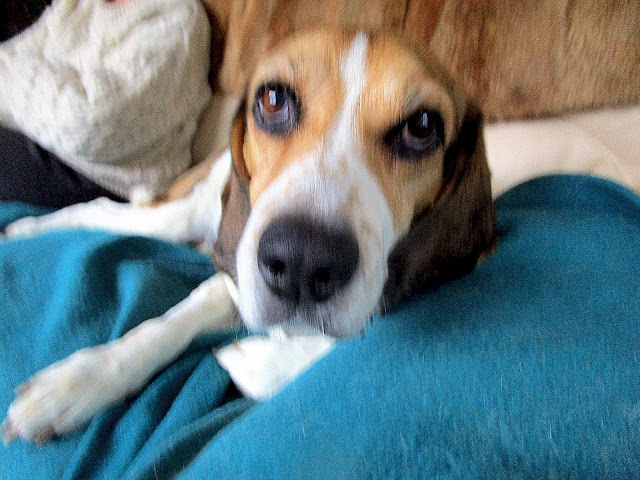 She was not so interested in the Scrabble but in the cake which followed ! The beautiful summer weather we had last week was definitively gone and everybody had to turn on the heating ! It was really cold.

It was quite a long time I hadn't done any shopping, Mr. G. likes to do that, but this time I had to buy things he always forgets like Orange juice or fruits and some other stuff. As there had been a few more Corona infected people, they had started again with the old rules, which means, everybody has to take a caddie, even if he only buys an apple, to keep distance, wearing the mask of course and desinfect your hands, follow the lines and arrows and pay with the card and no cash anymore. Then I heard that not all shops are following the rules besides the distance and the mask and where I was it was an exception.

I think in winter we will look all the same with bonnets and masks and some people wearing glasses and you won't recognize your own husband anymore ! 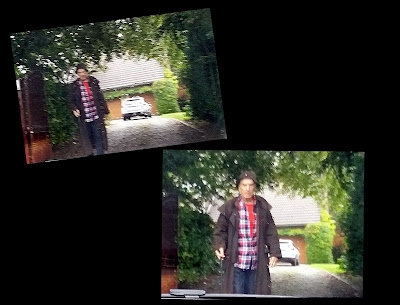 During our move Mr. G had found a long forgotten coat which our son had brought him from Australia so that he could look like Crocodile Dundee.  I had told him that if he wears that when I am with him,  I will walk a few steps (keeping sanitary distance) behind him and pretend that I don't know him ! It was maybe nice when he was in his 50 but now .... I took these pictures when I picked him up from his Whist club and strangely since that day the coat had disappeared again probably somebody had told him that carnival is not yet there.

After my shopping experience where I forgot the most important thing, poo bags for Rosie, I was disgusted and decided to buy now everything on Internet ! It went so smooth with the tensiometer and yesterday arrived the chest I had ordered for our Balcony to put the cushion and all "garden" stuff in there. Mr. G. and I tried to put it together, but we didn't manage and finally gave up. 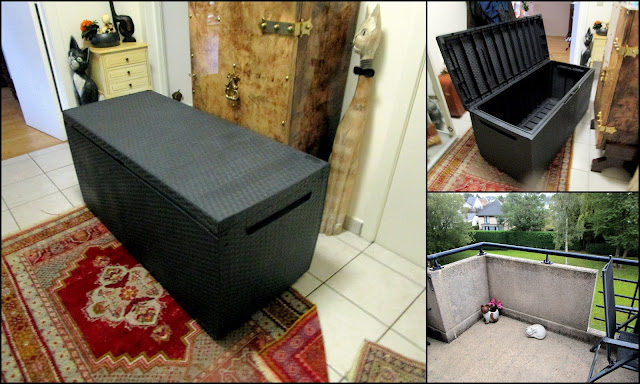 This is not my coffin, but the chest, which my cleaning lady had assembled without any problem ! I was really thankful, because it's nice that the things arrive in small boxes, but if you have to assemble them it's another story. Now I wait until everything is dry and then we can put the chest in this corner where now the cat with the flowers sits.

The chest is lika a bench and inside very spacious. Now I am thinking if I shouldn't buy a second one to keep my paintings.

I ended the week with a treat for myself, I went to a young woman who had just opened an anti-stress massage salon, with reasonable prices and as I needed something against stress, I booked an hour with her. She was very, very good and I felt a lot better when I came out.

It had rained cats and dogs and I just made it home and was not too wet ! Rosie was happy she loves rainwater to drink went on the balcony and had her drink ! 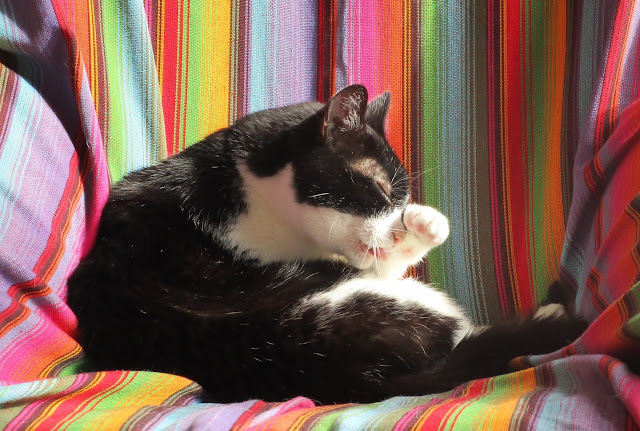 As she washed behind her ears we can be sure that it will continue to rain for some days or weeks, Rosie is better then all weathermen !

This promises a boring weekend with nothing going on,  the few entertainments they had programmed (outside of course) will certainly be cancelled not due to the virus but the rain ! What a year !

Last year at the same time there was a big pumpkin market with shows and music and this year ...... masks, umbrellas and empty spaces even in the city center ! 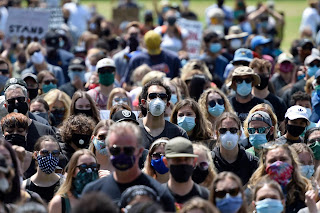 That massage sounded good. I keep saying to myself that is what i would like but then never do anything about it. The chest looks a great storage space.

Mr G's coat is a Driza-Bone oilskin coat and popular in the outback and the bush in Australia, he should wear it with pride. They are an expensive coat, or you could sell it on eBay so you wouldn't have to pretend not to know him.
A massage to relieve stress sounds good

Sounds good to have a massage. What a great chest for storage.

I wonder if the coat is an oilskin? Not exactly a fashion statement but practical in some circumstances.

That oil skin coat might be perfect for all the rain we are having at the moment. Great storage chest.

Cute dog. That coat looks very practical. Great chest. I love internet shopping. It's all we've been doing lately. Food and bits and pieces for the house. Clothes for new babies etc etc.

The coat doesn't look bad on your hubby. Apparently, your son is not devoid of taste.

I've got one of those Aussie coats.

The chest looks nice--it's great it can double as a bench and storage. I like Mr. G's coat.

I think Mr. G looks great in the coat :-)
It’s a great way to relax to go for a massage. I need some for myself, too!

Have a wonderful weekend xo

I like that storage chest and think another one would be great to store paintings. Funny that you're housekeeper was able to get it together. She is multi talented. A massage sounds wonderful. The Australian coat would be good for all the rain you are having.

Why did my muscles begin to ache just as I read your fave about the massage?
Yeah, I always forget one thing at the store. Then it goes back on the new list!
I do hope you get some respite from the rain and have some sunny days.