The Boston woman had found on the map of the house that outside there was a bit of asbestos under the door sill and therefore cancelled her offer. She must be hysterical, because in all houses here built until the 80 there is asbestos, and in ours only a little bit and outside ! No danger at all. Even her representative tried to explain it to her, but she didn't change her decision. Finally I was happy for my neighbors because such a difficult person doesn't fit in the street !

In the afternoon we had as usual our scrabble and this time I was third out of five ! Of course we talked a lot about the Corona Virus and that some people stock food don't go out etc. And Belgium has not many virus infected people I guess  about 200 and today we also had our first dead ! He was "only" 90 !! Italy is completely closed the borders but also the schools, shops and everything until the 3rd of April. My niece was not that worried, she is home and could go to the Garda Lake and have an ice cream there without any tourist !

I don't do anything special, I just don't shake hands or kiss people as they use to do here and that's it. In fact the best garment would be the Burka 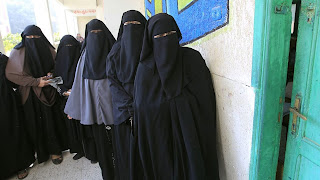 available in other colors

The next day it stormed and rained so it didn't bother me to stay home the whole day because my estate agent came in the afternoon with a whole bunch of potential buyers there were 18 or something in total who came as couples all 15 min and he led them through the house. I was sitting in the living room and worked on my computer as decoration. It was like in a zoo, only the other way around.

There is nothing to do the weather god I don't know his name, has decided to pour buckets and buckets of water on us also the following day. I hid behind the TV and tried to find a movie with a lot of sunshine. Finally I ended up at my friend Myriam who was also bored and behind her TV. She had got an email from the retirement home in which we have our painting classes, that due to the Corona Virus there is no class ! But we wanted at least have our lunch together so we looked on Internet to find restaurant which was not closed. All restaurants with "all you can eat" were closed, so that nobody could spit his Corona Virus on the food.

After some Whatsapp exchanges we finally found one which was open and which we all liked very much. We always go there after a movie. It is an Italian one called "La dolce Vita" (sweet life) and has an excellent real Italian food with self made pasta. 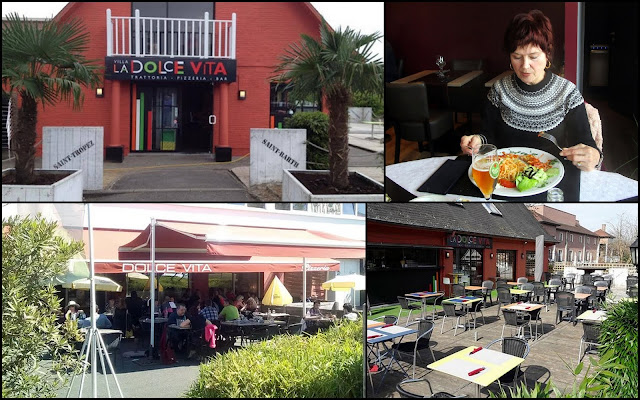 This time the lunch was escalope Val d'Aosta with fresh made pasta and salad.

It was a pity that it was not warmer because they have such a nice terrace with Palm  trees around.  We had a little sunshine, but when we left it started  to rain.

People and the press make you crazy with the Corona Virus, so on my way back I bought enough to fill in our deep freezer with ready made food, from our special French deep freeze shop, so if we don't get the virus I should have enough food not to starve in the next weeks.

Meanwhile universities are closed and students have to work at or from home. Doctors can be consulted via Internet to have prescriptions. The shops are still open but probably not for a long time, except food shops. In Italy all shops, and restaurants are closed and they let in customers in groups with 1 m distance to buy food.

My son who lives in Amsterdam has to work from home and my daughter in law too. Toby has no school. They are one step further as we in little Belgium but they foresee a peak for mid April !!

We are probably in the same situation in England as you are in Belgium. I am in Scotland at the moment. Everywhere is very quiet. On the train to Edinburgh from Leeds there were only 3 people in my carriage! At least I didn't have to sit next to anyone. Scotland has just announced no gatheringsof morethan 500. Hope travel isn't effected and I can get home! Looks like you will sell your house very quickly. Have you found your new home yet?

Asbestos can be a real concern ev n small amounts. Leads to cancer. My uncle had bladder cancer due to working in a building with it. The woman from Boston sounds very wise and in today's world I'm surprised you haven't had to get it removed from your home. Here in the states all the public buildings have had to remove it. Especially the schools.

How fun to be able,to go to,the Italian restaurant with your friend!

Spring showers bring May flowers! Today we have a nice rainy day....I'm thankful for it as it's helping to make the grass green.

Enjoy the weekend and look for the positives!!!!

The schools here have gone into a three week break, and the universities in my city announced today that the remaining classes for the year will all be online.

The feeling here is that the UK is not doing enough to stop the spread of the virus but I think we'll soon be facing tougher measures. Stay well. Asbestos is usually ok as long as it's not disturbed or damaged but it needs to be checked regularly which is not something everyone wants to have to worry about.

Annoying that your sale fell through but your agent seems to bring lots of potential buyers through. Events are now starting to be cancelled here because of the Virus. The Royal Easter Show in Sydney has just been cancelled and that is a huge deal for a lot of people. Last time it was cancelled was during World War II

We are in the middle of a winter storm right now. So cold and so much snow! But I'm thankful that spring is around the corner and this won't last forever. Fresh made pasta is the best. YUM! Now I'm craving Italian!

Now I want to bake some lasagna!

One week until spring and then we can expect some better weather. And viruses don't live well in warm weather, so that may help slow the corona virus, too.

Where I live, all of a sudden, the schools closed down. We are older and have no school kids at home, so it doesn't affect us, although it does affect our grandchildren.

Asbestos has been removed from all buildings here in the US, so I can understand the Boston woman's reluctance. Hopefully she'll find a place without it and you'll find just the right buyer.

It has been such a strange week in light of the virus. I've never seen anything like it. But hopefully all the measures being taken will stop its spread. I'm avoiding the news, too--I think they just like to stir up panic to increase their ratings.