CAFE AMERICANO AND MY BIRTH YEAR

For the theme "One Liner Wednesday, I had to pick up a word of something which had happened in my birth year. I was very surprised to find "Café Americano" in this year, which makes this coffee rather old !

You can find out what happened in your birth year here

The first time in my life I had a cup of "Café Americano" was in England. We had visited a little village near Eastbourne and on the way back we stopped at a coffee shop called "Starbucks". It had just opened, I think it was in 2008. All three of us longed for a coffee and we sat outside while my friend asked me what cup size I wanted. I was very surprised because for me there were two kind of cups, one for Espresso, which are very little and then the normal coffee cups which everybody used before the mugs became the big fashion

Since my marriage I was used to either Espresso or normal coffee which is not at all "normal" in other countries then Italy and France because the coffee is very strong. 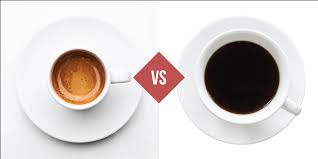 Espresso and a normal cup of coffee

When I heard that I could have a small, medium, or large coffee, I opted for the medium, thinking that small would be Espresso, medium a normal cup and large the double of normal. 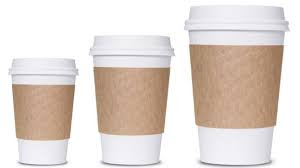 When my cup arrived my eyes almost popped out of my head ! The "medium" was enormous, the double of what I call a normal cup and at least for 3 people while the large must have been half a liter of coffee and the cup looked like a chamber pot. The cups were not out of carton like in the pictures but of ceramic.

Of course for me the coffee was not strong enough and Mr. G. would have called it waste water. My friends had a lot of fun seeing my face when I saw this huge cup arriving and I was happy that I had not ordered a large one ! 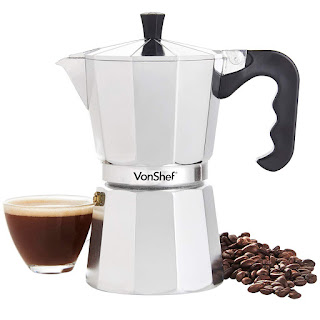 Each family in Italy has such a coffee "machine" it exists in different sizes. This one is for 6 Espresso cups !

When I hear "Café Americano" I think of my American uncle, when we stayed in Madison/Wisc. Mr. G. prepared our coffee for us normal, for him far too strong. He said his spoon would stand in the coffee, when we had our cups filled he took a little bit of coffee and added at least 3 times water to it and milk and then it was perfect for him. That was his Café Americano and I at that time believed that they all drank such a broth ! Nobody should ever generalize ! 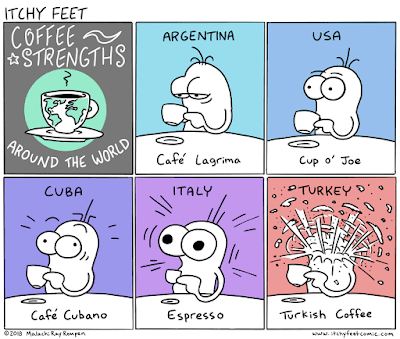 You explain why I don't drink Starbucks coffee. You call it waste water. We call it dish water, and I don't want a bucket of coffee, just a cup will do. What is happening here in some places is you have to say small when ordering, otherwise they will give you regular, which is large.

I dislike coffee full stop. Always leave the coffee creams for someone else.

I like strong black coffee. But I wonder if my definition of strong is the same as yours.