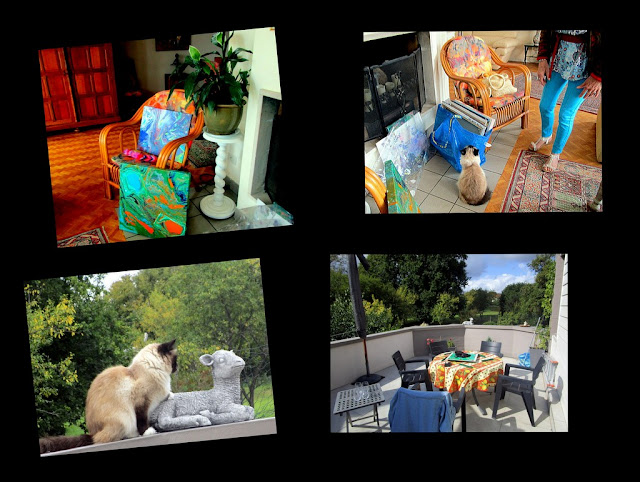 Monday was probably the last time we could play scrabble outside ! It was like a summer day and little Isis was watching the birds besids the lamb. After scrabble we had to decide which of the two paintings should be chosen to represent our group in the City Hall exhibition, as all Waterloo painters participate in this contest. It's called "Artist course" and after the vernissage in the City Hall, the painters expose where they want. Our group will expose in our usual painting place. 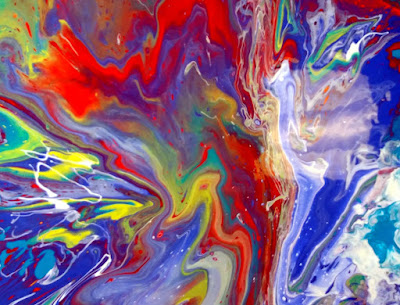 It's this pouring painting, and probably it was Isis the cat who had the last word. Of course I was happy and also a bit proud, it's a long time that I haven't done something nice.

One of my friends had her birthday and had invited us for champagne, coffee and cake. 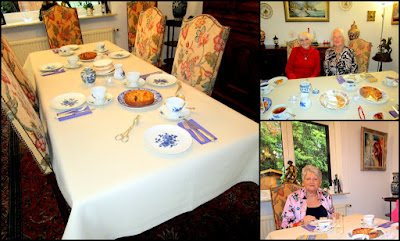 We were six and had a very cheerful afternoon. One took this picture of Mireille and myself as we are now the new "presidents" of the group together with the animator of course. The former president is now 85 and had done this for 25 years ! Now she will be only pupil and has no responsibilities anymore ! We had to split her job in two now with Internet, Facebook pages and  blogs, it became necessary. I took over all the publicity and artistic things the blog and Facebook writing, photo shooting etc, and Myriam will do the accounting and secretary work. So we needed a picture of the two of us to put it in the next circular mail.

We had our painting course and as I am into the pouring technique now I did two. 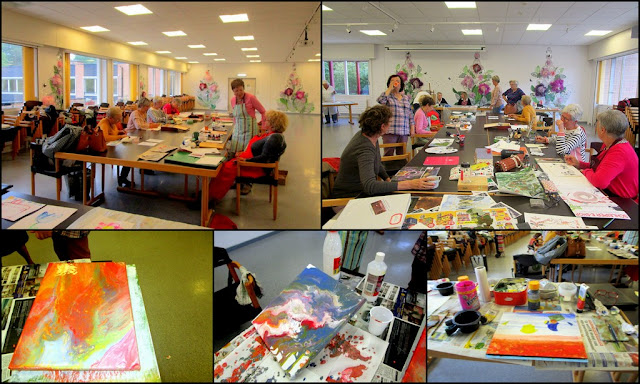 here they are, but I don't know at all what will come out when they are dry ! That's always a surprise.
We got 3 new members and two old once who came back, now that a "fresh" wind blows through the class !

In aqua gym we also have one couple more and these were the first "victims" of the not yet "Brexit". Instead of waiting until the show is over and a decision is taken to stay in the EU or go out, they had become Belgians together with more then 3000 other ex British citizen. They live in Waterloo since 45 years the children were brought up and went to school here, so they don't want to go back to the UK as they also have a beautiful house here. And as all the other UK citizen in all European countries they can't understand what has happened and only find one sad excuse the ignorance of the common people ! Now they can visit their family in the UK as Belgians !

Maybe they will wake up with the Thomas Cook bomb which also touches modest families, it went bankrupt because nobody wanted to invest in the UK under these circumstances. 20.000 employees lost their jobs. How sad.

Normally I always go in November to Egypt with Thomas Cook Belgium. This time I don't know why I haven't booked ! Lucky me ! My friend Chantal lost her advance, although it was said that there is a special insurance for such cases in Belgium, but with so many people to reimburse, who knows when she will get her money back. No Egypt in November for me, I wait until the storm is over and take another travel agency or book on my own.

I love the colors in your chosen painting! Congrats and good luck!,

We've heard about Thomas Cook, but we did not realize they had their own planes, etc. Terrible. When Pan Am went bankrupt there were many suicides by the employees left with no jobs.
I love your poured picture. Simply strikingly beautiful!

I really like your pouring painting. I heard about Thomas Cook financial problems many months ago. Why have people booked with them?

That is a really beautiful painting. It's perfect to represent the group :-)
Lucky you indeed that you haven't booked your trip with the company!

Beautiful pouring painting, love the colours. Glad you didn't book your holiday it has saved you all the heartache.

It is sad that Thomas Cook have gone. It wasn't lack of investment but too many High Street shops and the fact that many people now book online. Management should have realised that long ago. Congratulations on having your painting chosen. I am not surprised it catches your eye with the merging of those colours.

Congratulations on having your painting chosen! How nice to have some new and returning students to art class.

Your picture is lovely. It deserved to be chosen. It sounds like the painting class definitely has a new lease of life.

Congrats on having your painting chosen. That is very exciting! I'm sure you and Mireille will do a wonderful job in your new positions for the painting class.

Last week I played Boggle (a word game) and for a minute I thought about you and your weekly Scrabble game. I probably won’t play this week, but it sure would be fun.
Congrats on your painting being picked. What an honour. I want to try that technique.
That sure was fortunate you didn’t book a trip to Egypt this year. What a bummer for all those who did.
Have a good week, Gattina.

a spirit of simplicity said...

I like the painting very much. Congratulations on becoming co-president.