For today's "Just Jot it" Jil has given us the word "Serendipity", to knit a story around this word.

I was never good in knitting wool but knitting around a word I have never heard, seemed quite difficult to me. What did I do as I always do when I don't know something : I google !

Google brought me to Wikipedia who stated that Serendipity means an unplanned fortunate discovery, like for example the penicillin in 1928 or the microwave oven in 1945 !!

Unfortunately I haven't discovered nothing besides some unexpected dust under my bed. But I don't think that this is a fortunate discovery. The word was invented by a certain Horace Walpole in 1754 in the English language. I think he was a rather complicated man, why invent such a strange word coming from Arab traders or the Three Princes of Serendip, instead of just saying "luck" or "fortunate". That's much shorter.

When you dig a little deeper into the meaning of this word, you could get a bit confused, at least I did,

- The Serendipity of Science
- The BBC serendipity webside

and the Synonyms for serendipity

Now you have the choice.

After having put together some synonyms for serendipity I made the following discovery ! 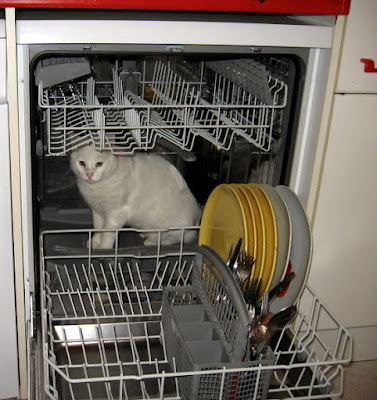 It was a blessing that during my lunch break I had the good luck to find my cat in the dishwasher, which was really a happy chance.

For Arthur it was serendipity or was it for me ??

It was serendipity when Arthur found the dishwasher door was ajar and he could get it and there was food left on plates to clean. While the dictionary definitions are of course correct, it is not a word to be used out of context, or if you like to make it easier, in the wrong situation. It is a word that is hardly ever spoken. I don't think I have ever spoken the word or even written it. But I know in what circumstances I could use it. It is also probably a rather old fashioned word now.

I like your humor: "...knitting around a word", Arthur and the happy chance:) I also turn to Google for help whether in language issues or any other problem, and I usually get constructive answers.

From Arthur's point of view, the dishwater is just another box. That makes odd noises every once in awhile.

Nice post - and it was serendipity for both of you - neither of you would have been happy if you had turned on the dishwasher without discovering Arthur was inside!

He is always there to make us smile...

It was lucky for Arthur that you saw him before you turned on the dishwasher! I like the word serendipity. We use it when we find something unexpected on our travels ... maybe we go out to eat at a certain restaurant (that is planned), but on the way we see a rare bird or a beautiful sunset or flower or something else wonderful I can photograph for the blog ... the unexpected pleasure is serendipitous! ). To me it makes it a little more magical than just good luck. .... But I can’t imagine I would ever be able to understand these kind of slight differences in a language that was not my first, we are so lazy and uneducated on other languages . I would be lucky to learn to say please, thank you and where is the toilet .