I started the week by looking out of the window to make my program for the day, 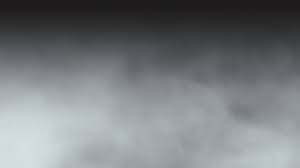 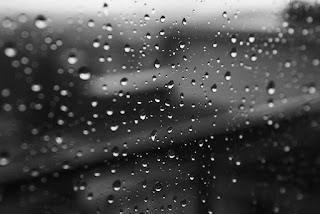 and when I saw this, I only wanted to make one program : hide and sleep until spring comes ! Just as my cats ! 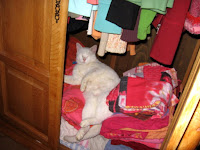 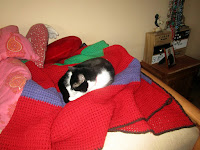 I pulled myself together and thought that is a day to sort out the photos on my computer. And that's what I did ! At least in the evening I had the feeling that I had worked hard the whole day !

The weather didn't get any better, but this time I didn't bother because we had our scrabble day. Instead of 4 we were 5 and it went more quick. I didn't loose I was just before the last one !
Unfortunately I forgot to ask one of my companionship to take a picture of me and the huge black dog Tosca, who, when I made a Yoga demonstration on the floor thought it was a new game and wanted to do the same. He jumped around me and pushed me with his wet nose, the girls laughed their heads off, and that's why there is no picture. I have to say that the dog has about the same size as me !

For aqua gym I badly needed a bathing costume, my old one had become like a bag around me. Nothing is better then going to the shopping center because the shop I had found on internet was also there. With a friend who also needed a bathing costume, we went there, had a nice lunch and both found the right costume, so we were very happy. Sales was still going on until the end of the month and now as the end is near, there is sales on sales ! I didn't need anything and didn't see anything which would have attracted me, but she found a very nice pullover.

Then we returned home in the rain of course. 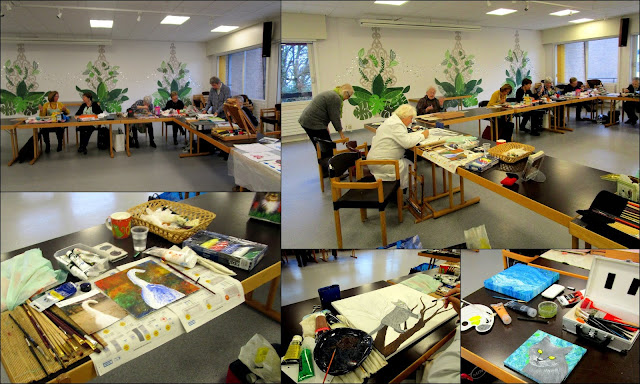 Here we are in full action in our painting class, it seems that we have an epidemic outbreak of cats, I had always been the only one painting cats and now half of my companionship is painting cats !!

As usual we had a nice time and after class 4 of us went to the Carrefour Lunchgarden and had lunch there. A rather extended lunch because we arrived around 12 and left at 3 pm !

I know the feeling. When the weather is gloomy I just want to stay in bed under the warm blanket. But there are always things to do: nice things like your scrabble, gym, yoga and painting; neccessary things like my fixing or replacing something in the house (with help from youtube tutorials).

Winter sales everywhere. I intend to visit Ikea before end of sale; it's located in a very interesting zone, so it's a nice trip for me.

Back in the day, the ancient Egyptians worshiped cats as gods, and they have not forgotten!

A gloomy day is the perfect excuse for staying in and keeping warm. Sounds like great fun shopping and having lunch with your friends.

We don't have very many gloomy days here in Florida .... that must be why I never get anything done ;>) ..... bathing suit shopping is the worst! So hard to find the right one. I'm glad you did!

It's been overcast here most of the week. I am looking forward to seeing the sun, whenever it appears! It's nice to have indoor projects for rainy days, though. Good for you for getting some pictures sorted! Glad you found a good deal for what you needed! Your long lunch sounds fun.

Yes the rainy weather is depressing but yesterday and today were quite good here but cold! I hate shopping for a swimming costume so I'm glad you found one you liked.

winter is good time to sleep...hehehe...lol.
have a great weekend

A lady who lunches! Good on you.

I wish I could see photos of you and Tosca :-)
These paintings look beautiful. Cats are great art subject for sure!