When I was a little girl, wherever my friends and I could detect an echo of our voices, we  shouted as loud as we could one after the other and laughed when our voice came back. Of course we used the ugliest words and giggled when we heard ourselves. In fact we made a kind of voice selfie.

Later when I was older and went on holidays into the mountains in some places you had a wonderful echo ! You said a sentence and it came back, you sang a little song and you could hear your voice it was as if the mountain was talking to you. 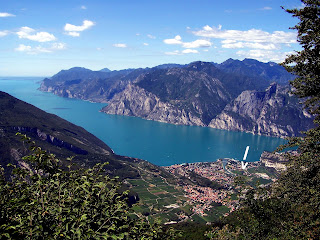 Lake of Garda (our apartment)

During one part of my life I was really scared about echos. That was when we went each year on holidays to Italy at the lake of Garda where Mr. G is coming from combining family visits and holidays at the lake. . The north of the lake is surrounded by high mountains, which look really very beautiful, but ... in some years we had a lot of thunderstorms, which probably weren't that noisy, but the echo from the mountains doubled the effect and it was terrifying ! Normally I am not afraid of  thunder but with several echos as amplifiers, it was really awful ! The noise could have woke up a dead ! Sometimes I thought the walls were shaking.

But as for everything from year to year I got nearly used to it and it didn't scare me that much anymore. There was nothing to do against it anyway.

an Echo can be dangerous 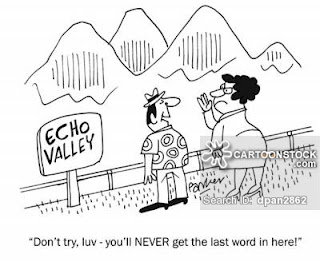 A nice memory from your past of holidays with Mr G in Italy, thunder notwithstanding.

I hated thunder growing up, even without the echos. I still am not too happy about it, but have learned to live with it.

Echoes of all that thunder do sound terrifying! Thanks for sharing the story and the comics at the end.

Your post brought some childhood memories! We did the echo thing whenever we went to the mountain :-)
Lake of Garda is so beautiful! Echoes of thunderstorms must have been really loud. Glad you got used to them!

As a child I was told that the thunder was God making the beds!

I remember loving to hear my voice echo. But I was told god potatoes in wheel barrow was rattling around that cause thunder.
Coffee is on

I got a laugh out of that toon!