In 1989 I started Art school in Brussels at the young age of 46. We often went to Paris when there was a special exhibition. I have seen Toulouse Lautrec, Picasso, and a lot of others and after the exhibition we explored Paris. After having seen the Tourist stuff, which almost everybody knows, one thing I visited is graved in my memories because it was so shocking.

We visited the cemetary Père Lachaise where lots of celebrities are burried. 25 years ago already at the entrance were graffiti and indications for Jim Morisson's grave, as if he was the only celebrity buried here. 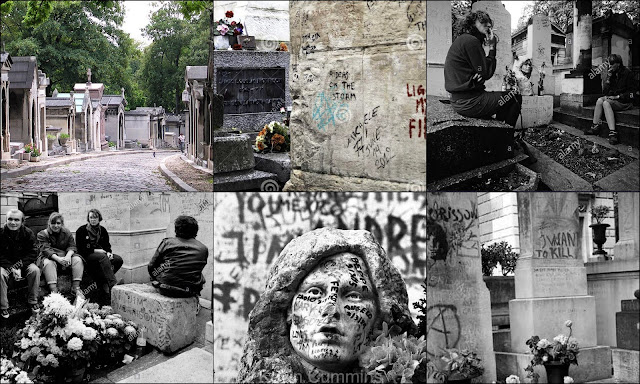 When we arrived at the grave, impossible to miss it, there were a bunch of young people sitting on the other grave stones around Morisson's grave, the grave itself was full of syringes, spoons and little bags. Also Whisky and Wodka bottles. I had never seen such a grave in my whole life. Girls were crying, some boys wrote poems in a book, some smoked (not cigarettes), songs from their idol were played from a  record player. It seemed to me that I was in another world and I was surprised that there was no police or security guards. The other grave stones around where also full of tags and graffiti. The families owning these graves were certainly very upset.  Unfortunately I didn't take any photos at that time, so I picked out pictures  from the internet of what I remember. For once my memory was quite good. No wonder I have never seen a grave like that afterwards until today ! 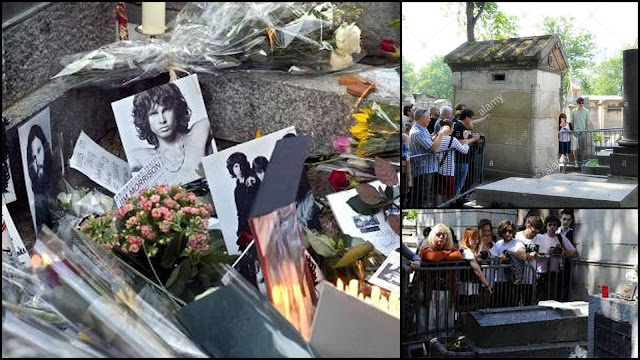 At least 25 years later I returned to the Père Lachaise cemetary, together with a friend who had invited me for 10 days to help her to settle in her new apartment in Paris. Jim Morisson's grave was now protected like the grave of a king ! There were barriers all around, no way to paint or sit on other gravestones and 3 guards were there permanently to keep an eye on the public. What a difference ! Couldn't believe it. The grave was full of flowers, and no syringes anymore. The public too had changed, there were still some fans but they didn't bother anybody.

Ever since I spent these 10 days in Paris helping my friend to buy furniture, curtains, household appliances etc, I decided that never ever I would go to Paris again ! Unless there is something so special that I can't avoid it. I learned how you live in Paris when you are not a tourist !!

Her father a former politician with long arms had found her a beautiful apartment in the 16th "arrondissement" one of the most posh districts of the 20 districts in Paris.  She got it very quickly ! Which is not easy at all in Paris or other major cities.  I don't know the rental price it didn't matter anyway Daddy payed. 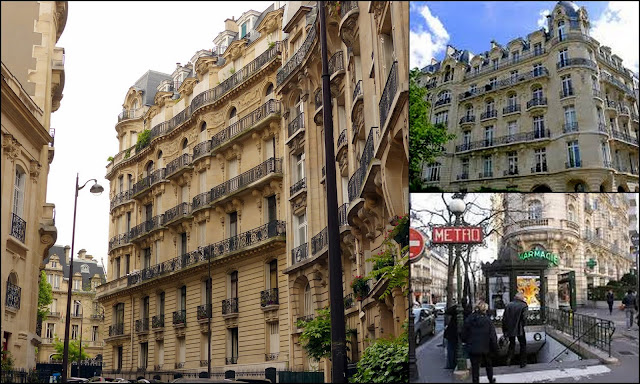 The houses in this area were old and real beautiful inside. There were metro stations to get you wherever you wanted. Unfortunately the metros were quite dirty and it looked as it would never been cleaned. 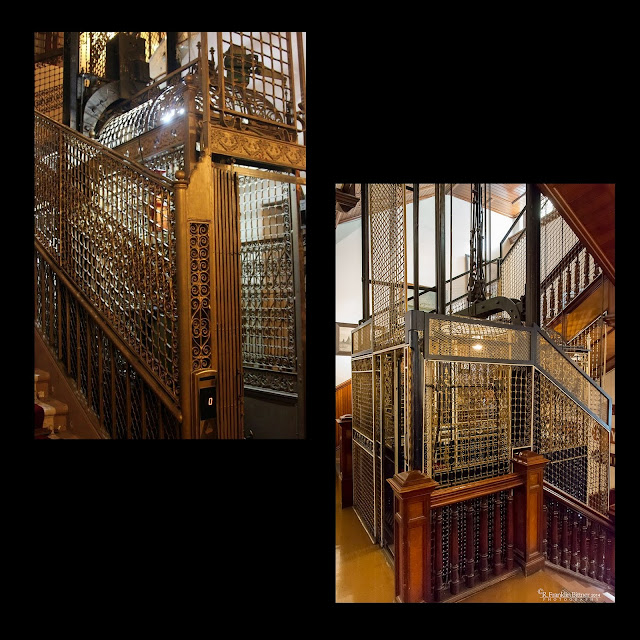 The most funniest thing in the building was the old elevator. I loved it ! It was like standing in a cage and you could look through the barriers or grids down on the wire which pulled you up and also on the staircase where people preferred to go upstairs because they were afraid of taking the elevator. 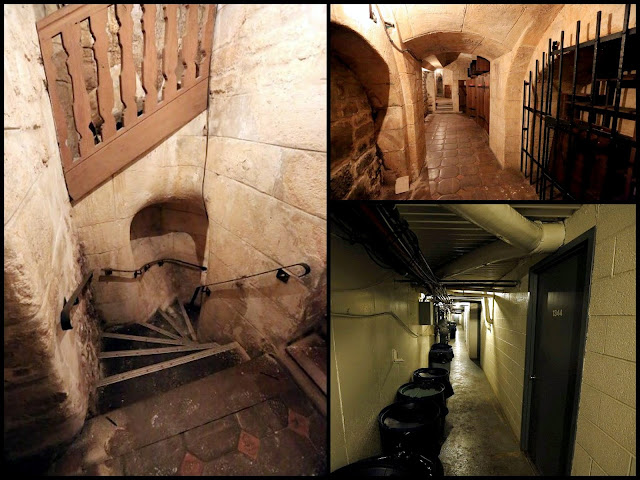 Although the apartment was very modern inside and had all comfort you needed, there was another thing which intrigued me very much ... the basement ! I also had never seen basements like that in a private apartment building. I had seen catacombs but never a basement which looked like a catacomb.

When she took the key and led me down the old used stone stairs. I was pushed centuries back. Each apartment had a cellar with a lattice gate and an old lock. Before we arrived at her cellar we had to walk through narrow corridors with low ceilings and it was really a bit creepy. She told me that all these basements are like a cobweb under Paris and in some locked up cellars there are skulls and bones stocked.

I wished I could have seen that, but of course she didn't have the keys. This was really an interesting and special place to visit and I enjoyed it very much.

What I didn't enjoy at all were the people. They were so arrogant and rude, the pedestrians and the car drivers. The shouted and insulted each other for nothing. The traffic was crazy and there I could learn a lot of not so elegant words in French. And this is a posh area, I wonder how they speak in the less fortunate districts.

Shopping too was a disaster, the sales people behaved as if you the client did them a favor to buy something in their shops. That was for the washing machine, the dishwasher etc but also for the living furniture. The last one got it all, I had enough. I asked why he is so aggressive and so unfriendly when we only want to buy a sofa. He looked at me as if I was just arriving from the moon and didn't understand what I meant. My friend the polite, adorable, friendly girl who never raised her voice in Brussels, changed completely in Paris. She also started to shout, pushed people around and became also aggressive. I thought if I stay here a bit longer I have to behave the same, otherwise nobody moves and I obtain nothing !!

I was always happy when we returned to her apartment where we sat on mattresses, the sofa hadn't arrived yet and watched TV and  had our supper on trays on the parquet !

Now it's such a long time ago, but I can never forget this stay in Paris.

Rules
Link
Posted by Gattina at 07:30

My sister and I visited Père Lachaise a few years ago and thought it was quite a haunting place. Don't know whether we saw Jim Morrison's grave, but we saw plenty of others.

When I was in Germany about twenty years ago, we were in a small café being served by the rudest people ever. But my friend told me that over the years it did change because the locals got fed up with all the rudeness.
And when I worked in Italy and France we always dreaded the Parisians on holiday, not the French in general, just the Parisians: obnoxious and arrogant!

I don't know what to say. It was a fascinating post about Paris, the people of Paris, Jim Morrison, the rudeness. In Germany we found retail shop staff to be unfriendly and abrupt. These were places for local people, not really tourists.

It gave me a completely new picture about Paris.

what an intriguing post and photos ~ Attitudes around the world have changed and so many are arrogant and loud ~ Speed is another factor ~ rush, rush, rush ~

I always thought I missed out by not going to Paris ~ by your post I don't think I missed a thing ~ I wonder if it has improved of late? ????

Happy Day to you,
A ShutterBug Explores,
aka (A Creative Harbor)

You have such an interesting tale to tell. The deep history and architectural beauty of Paris is mindboggling. I was there briefly and saw only the touristy things. It was so lovely but I lamented the traffic and graffiti inching closer and closer to treasured artifacts. Your story reminds me of a pastry shop I visited there. The man and woman behind the counter almost begrudgingly served me in midst of their heated argument. Their shouts at one another added a richness to my journey and when I think of it, I smile.

Glad the grave is protected now so that it can remain respected. The corridors, stairs leading to the basement sure look scary! I visited Paris twice long time ago. I was warned that people there won't be happy if I spoke English, but fortunately, those who I interacted with were nice :-)

I find myself wondering in a century if there'll be anyone who'll care less about Morrison.

I enjoyed Paris but I have to say I preferred Normandy. Did not make to to the Pere Lachaise cemetery. I wanted to go but we didn't have time.

Paris is classic and romantic city.
thank you tell your story about Paris.
have a great day

What a shame that you have such unpleasant memories of Paris.

What an elegant apartment. I too had memories of people being rude in Paris, but when I was there a couple of years ago with my daughter, we had a wonderful time! People and cities change for the better - as do we!

This is an interesting perspective of Paris not at all like the glossy tourist brochures.

No, Parisians are a race apart - arrogant, self-important - not like the rest of the French people.

Those old elevators are a trip, aren't they?

This is so interesting to read!