My weekend was quite special, because I had the first surgery of my life, which wasn't very important, I mean they didn't take out half of my still remaining brain but they cleaned my left eye which was covered by cateracte. I had noticed that there was something wrong with my eyes because I couldn't read the subtitles of Inspector Barnaby's murders anymore. 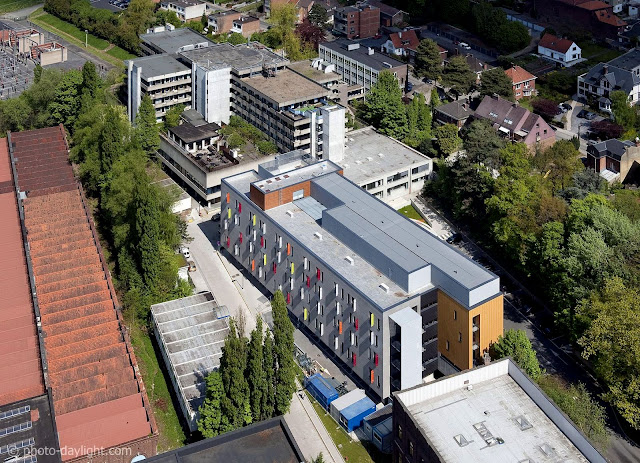 Over the years our little hospital (the small building in the middle) had expended to a huge maze, where people got lost, looked for signs and I had to ask 3 times until I found my section.  Next week for my second eye I take my GPS along (although I doubt that it works) 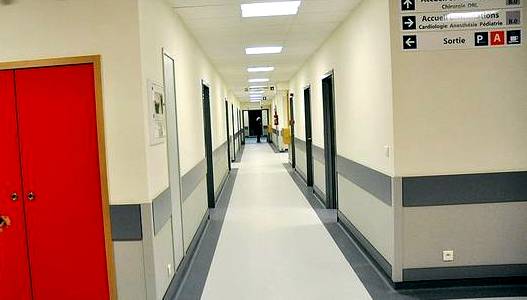 After km of corridors I finally arrived at destination, was registered and got the way to the room where we had to wait for the surgery. 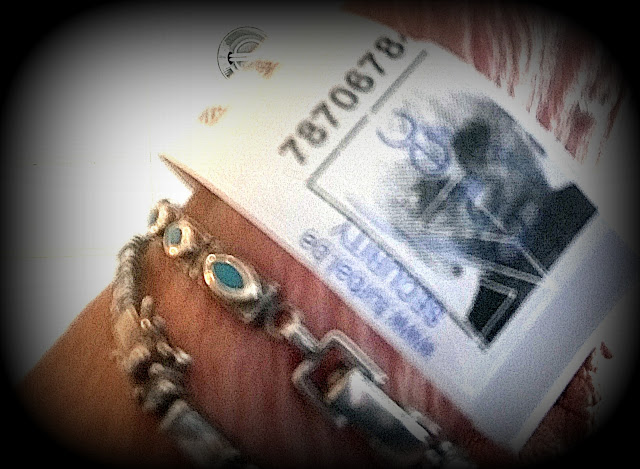 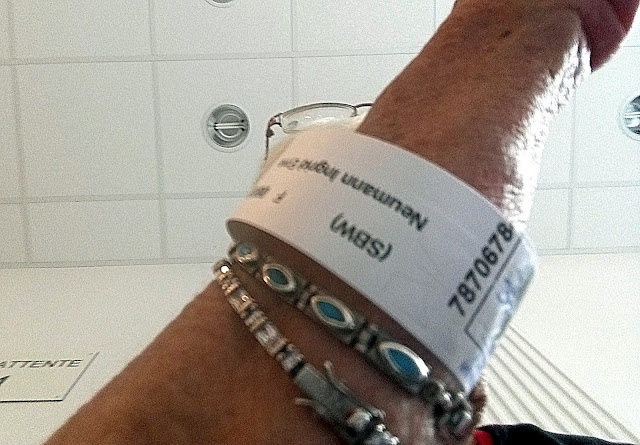 Apparently they were a little suspicious about my mental health because I got a bracelet with a photo where I look like the wife of a terrorist and a number. 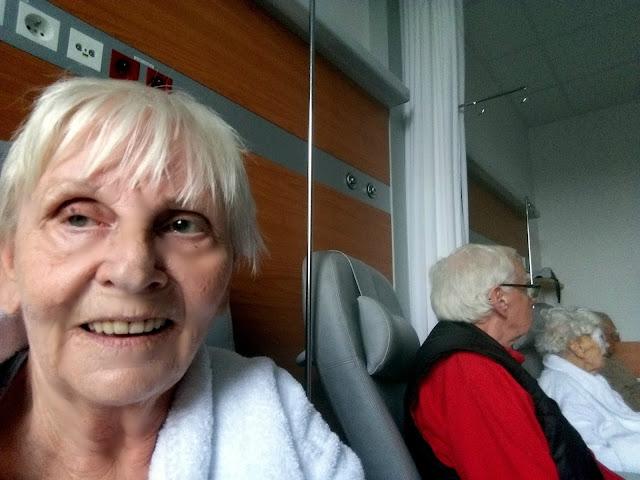 I had to undress put on a night gown and a bathrobe and sat on a wheelchair together with the 6 others. Apparently our doctor had given all of us the same appointment and then operated one after the other. We were a very funny group and our laughter made the nurses coming and laugh with us ! Each time one was wheeled away we shouted "Enjoy yourself" and the once who came back didn't look traumatized at all, they were hungry and had their coffee with cake and orange juice with joy ! As we all had to come again the next day but not in the clinic, in his private consultation we were all happy to see each other again ! From the surgery I only remember two things, the beautiful colors I saw when I had too look in the light and then when the doctor pulled off brutally the plaster from my  face and I thanked him for the free epilation ! He said that I was the first person who had noticed the colors ! 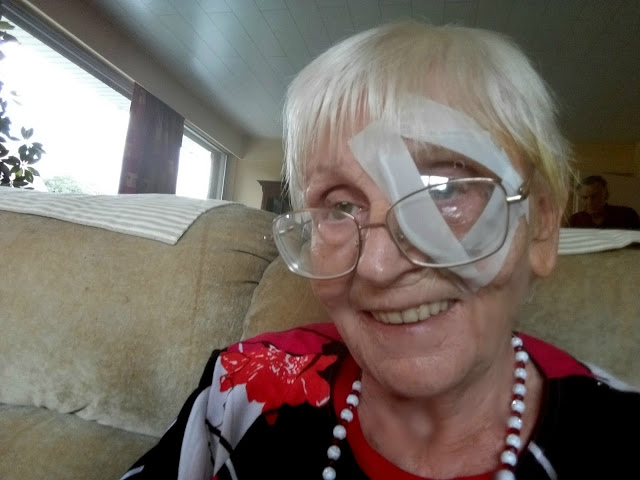 After my coffee and cake I had to wait for another hour in case my eye would drop out, but nothing happened and I called Mr. G. to pick me up.

He had been half dead of worries, and was surprised to see his wife so cheerful. 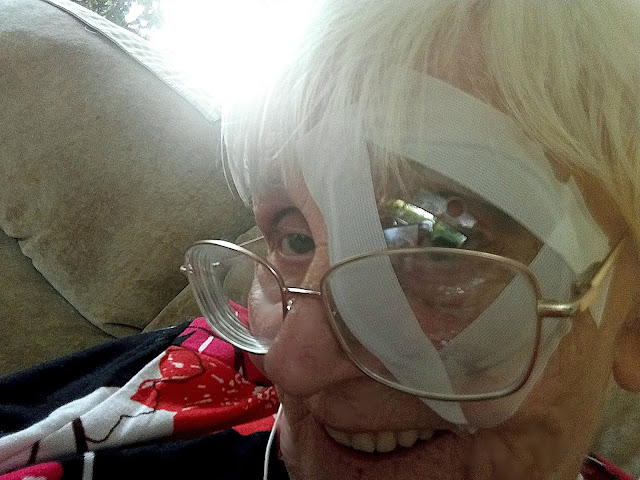 When I walked I felt a bit dizzy but nothing special. As I was not allowed to bend over or to carry heavy things, I had a good excuse for doing nothing ! 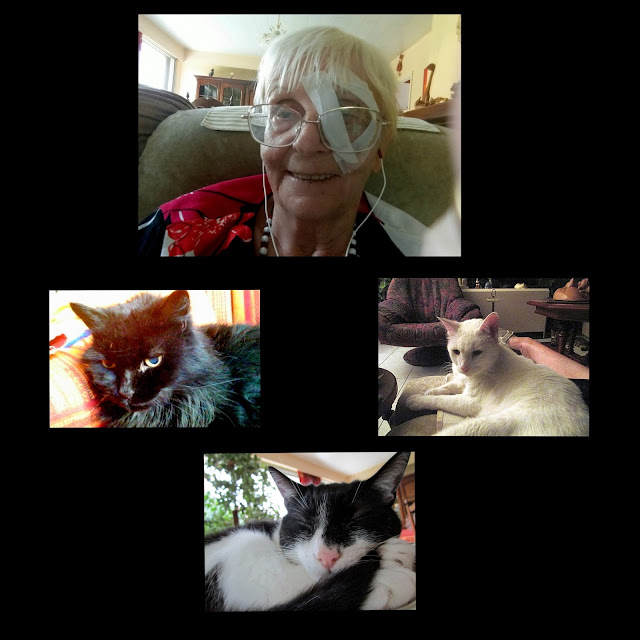 and my cats did the same ! 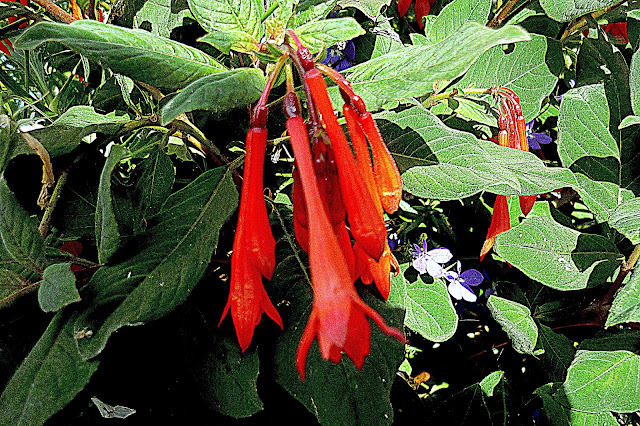 Unfortunately I have no idea of the name of this flower

My eye DR. said my slow growing cataract will be ready to be removed next year. You give me hope that it might even be fun. I might have my name and number around my wrist, but a photo?? haven't heard of that before.

Heal quickly, have a nice Monday

Hi Gattina - glad the op has gone well ... and I'm sure the next one will be fine too. Take care -cheers Hilary

Gattina so glad you are doing well ~ neat photos ~ sending lots of healing hugs to you,

Wishing you a complete and speedy recovery.

Glad everything went so well, wishing you a speedy recovery. Take care.

Glad your first surgery went well! And that you had fun time, which I guess doesn't happen with most surgeries :-) :-) Enjoy doing nothing with kitties and I hope you recover quickly!

I know I'll have to have that done someday. Oh dear, I'm a coward.

I'm glad it went well. I think the photo on the ID band is a good idea.

Hope the second one goes as well. Do you have to do drops in your eye? That was the hardest part for me, but I have heard that they have improved it so you don't always have to do that.

It would be a shame not to be able to read the subtitles on Midsomer Murders! (Of course we speak English or some version of it, but sometimes I wish for subtitles on all the mysteries from England that we watch!... it's not always the same language ;>)