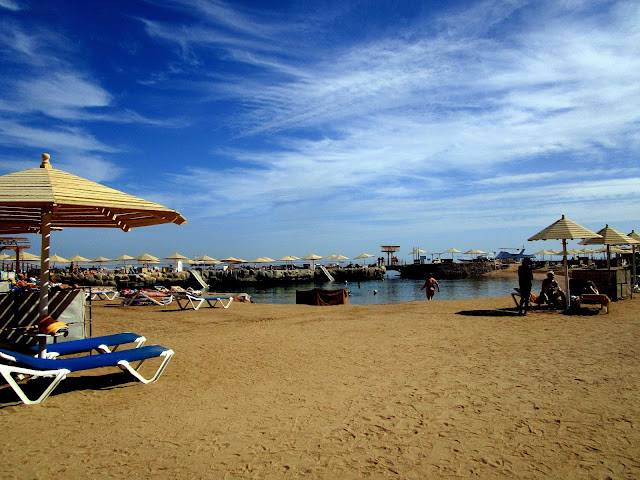 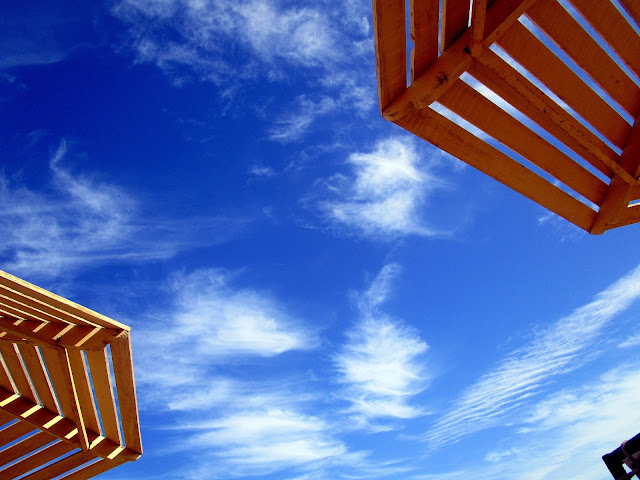 Sky over the beach in Hurghada/Egypt

For the week's resume you have to scroll down if you wish. I am actually at the Red Sea in Egypt and have written every day.

Poor Nicole got what lots of tourists get when they eat raw vegetables the disease called in French"La Tourista" which means "The Tourist" and sends you all 5 min to where even the King walks. So she went to bed at 8 pm and this morning was a little weak but OK again. 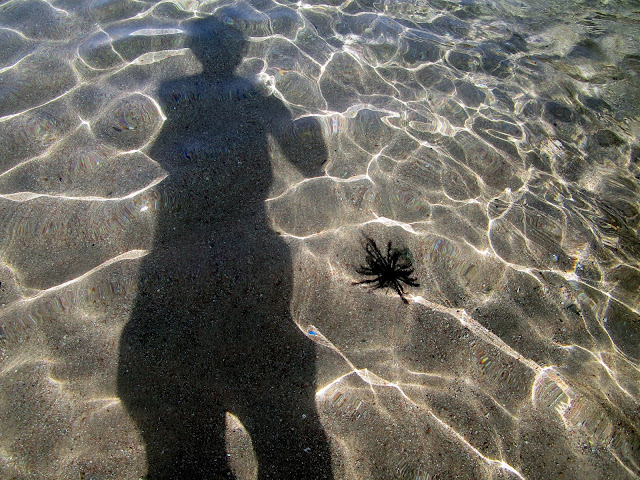 When I wanted to go into the sea to swim, I saw this monster, I first thought it was an algae, but a man told me that it was a sea spider (it had a complicated name) I preferred to swim a little later when this monster was gone !

Late afternoon Chantal appeared white like a bedsheet, now she had also got the "Tourista". As I was the only one who so far has escaped, I suppose it is because they both ate dates and I don't like them. They were probably washed with local water and we, with our fragile stomachs support nothing !
Now she is in bed and we hope it's better tomorrow. Fortunately the hotel and also the guests are well equipped with medicine for this special case.

When we lay at the beach suddenly somebody shouted "A turtle" so we all hurried to the wall and looked in the water to see the turtle ! 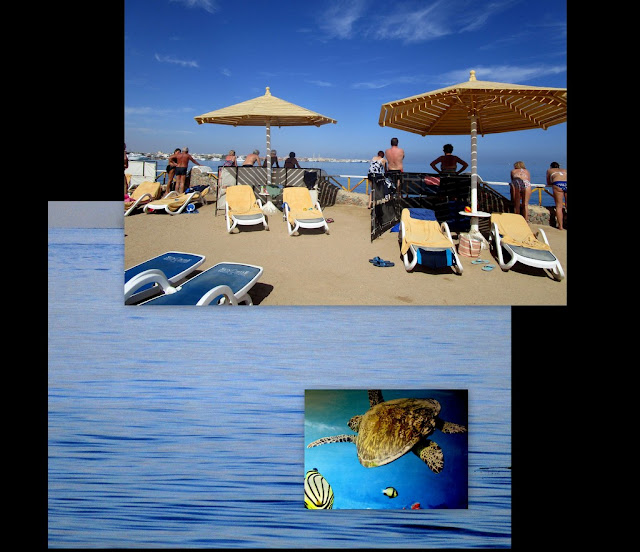 I saw the movements from far, sometimes a paw sometimes the head. I shoot and shoot and hoped it would be on the picture as I also had zoomed, but no, there was nothing, so I just took a  picture of a poster !

Later the wind started to blow more and more and a few wind screens fell in the sand. 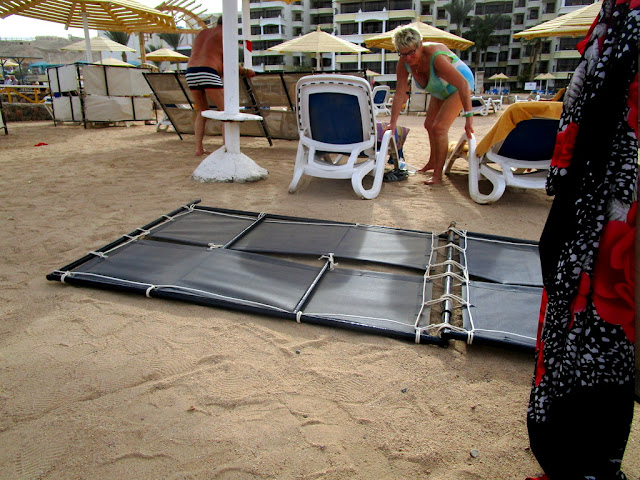 I nearly got one on my head. So we packed our things and returned into our rooms. 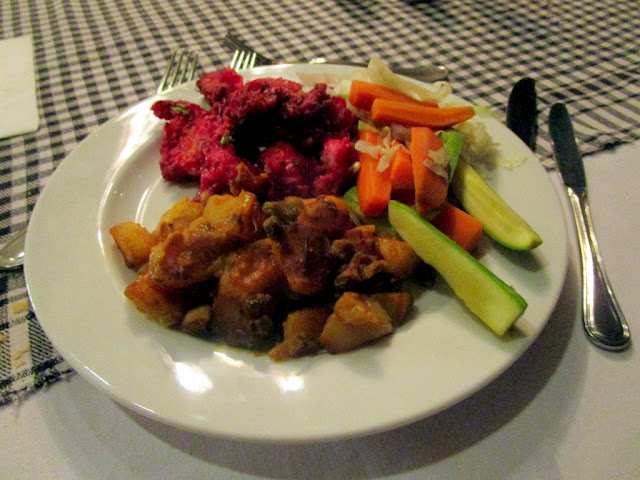 Yesterday evening for the first time I ate a red fish ! Not the once who keep you company in an aquarium and are called gold fishes, but fish fillets and the spice was red. I have no idea what it was apparently Indian food, because it was an Indian evening ! It was very very good !

more participants here at FIVE ON FRIDAY
Posted by Gattina at 05:25

The Wikipedia entry gives lots of information about sea spiders, but not if they are dangerous. I assume the dates came from the hotel? I am surprised at food poisoning when it caters for western tourists.

I hope you keep well

So beautiful! Such lovely colours!

Oh dear......that illness is NO fun and Im guessing it was the water. My husband went to Guatamala on a missions trip last winter to help in an orphanage and hospital and was told to only drink/use the bottled water the team provided!!

I am quite envious you are at the Red Sea....lthat place, like your country, is on my bucket list to visit one day when i am finally child-free! HA
That sea spider would keep me out of the water too!!!
I hope you have a wonderful rest of your vacation and no more sickness!!

I love the beautiful skies! What a wonderful place to be when everything here seems so dull. Sorry about Nicole. Hope it didn't last long. I never knew there was such things as sea spiders. Shudder. I don't like the ones on land I reckon the ones in the sea would put me right off!

Poor Nicole, hope she is feeling better soon. Looks like you are having a great time apart from that.

How lovely to see those bright blue skies in Egypt - all is grey, grey, grey here. I'm sorry your friends became ill on vacation. Thanks for sharing your photos. Have a good weekend.

Oh my, getting sick during the trip is one of my biggest fears! Glad Nicole is better and I hope Chantal gets better soon as well. Good thing the hotel is well prepared for Tourista. I guess many people get it there. Sky is beautiful and water looks amazing! Have a great day!

So sorry for the illness of your friends, but thank you for sharing the gorgeous views!

I hope that all of the ickiness is gone and you are back to enjoying things!

Fabulous photos all those glorious colours! Glad you are having a marvelous time.

What gorgeous blue skies! Glad you've escaped the tourist's disease, and hope it doesn't catch you at all. I think I'd stay out of the water while the spider is around, too.

Yum dinner looks scrumptious. Sorry to hear your friends got the runs. WE call it Bali Belly or Dehli Belly maybe yours is Egypt belly. It can spoil a holiday so I hope they recover quickly and that you don't get it. The weather looks great except for the wind. The beach looks crowded too but the water looks perfect.

I do hope you don't get The Tourist. I've always drank the local water as my family is from upper Egypt. However, I got this bug years ago in Alexandria and since that time, I am very, very cautious. Have fun. Great post! Pat

Love to see more photos of your holiday.

When I lived in California and visited Mexico, we had to be careful of the water and fresh vegetables and fruits. We called the illness Montezuma's Revenge.

Wish I could try that red fish. Looks good.

hope both of your friends are recovered and that the wind has died down. In the States when people get that disease while on vacation in Mexico it is called Montezuma's revenge (for the Mexican King or general the US defeated in war a long time ago)... when people from Mexico first come to the US, they get the same thing.... it is all in what our stomachs are used to I guess. I have never gotten it myself, but Bill has.