Today the sun hid behind clouds and only came out from time to time. But nevertheless we stayed on the beach.

Yesterday evening I was invited by the management for supper which was given for all guests who had been in this hotel more than 5 times. 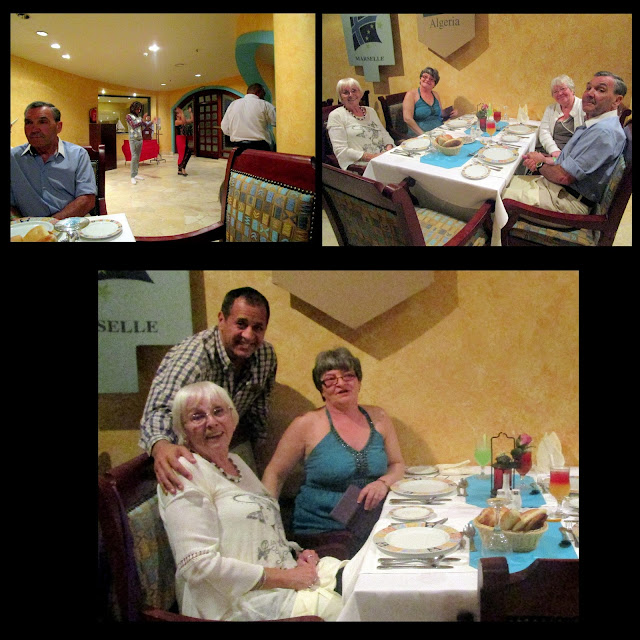 It was in a special room very nicely decorated and with individual tables. We were quite a lot of Germans and Brits. I would say half and half. My table neighbors were very nice people. Alley (besides me) came from Scotland and the other couple too, but were originally from Yorkshire. We had a lot of fun together and I think we were the last once to leave. The General Manager came to our table when he saw that I had asked a waiter to take a picture of us four. Of course there was the usual speach and then a very nice menu.

During breakfast Nicole complained about the coffee machine because each time she pushed on the button there was milk coming out ! But she didn't want milk she wanted coffee. Finally there were 3 waiters around her to solve the problem. I arrived too to see what happened and also for taking a coffee. And what did I see ... she always pushed on the button "Milk" because she hadn't read, but just pushed the same button than on the other coffee machine, where it's black coffee at the same place ! So we all laughed and she finally got her coffee !

Today it's already one week we are here ! Time flies by so quickly !

Sounds like a fun evening, time really does fly by when you are enjoying yourself.

How nice the hotel offers special supper for guests who have stayed there many times. Sounds like you had a great time!
The coffee maker story made me laugh :-) Glad the problem was solved!

I don't think I ever stayed at the same place more than once (privately). Although I was recognised at a hotel in Germany in September, which was very nice.

You are obviously having a great time full of fun and laughter.