As the weatherman had announced rainy weather, the sun came out of course, but Ilona and I had already planned to go to the big shopping center in the next town called Nivelles. We thought if it rains it is the ideal place to go. But it hadn't been ideal at all. It was Saturday and many families with kids had the same idea. There were even more people as usual because everything was "on sale"
We could hardly move and finally sat down in a café. Fortunately I found something very practical, training trousers to wear at home, very warm in fleece ! That's nice for watching TV. Ilona found some very nice underwear, so we hadn't been there for nothing, because for window shopping there were far too many people !

We returned home and chatted a bit with Mr. G. disturbing him in a TV Quizz ! 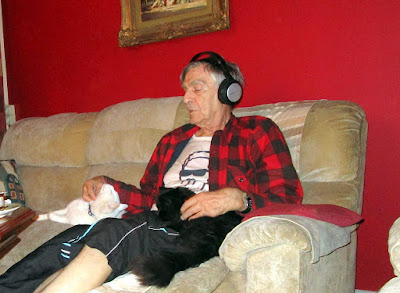 Sunday was a real sun day ! I had read that in the orchard of the "La Hulpe" castle, there was an Apple fest, and people were asked to bring bags along because they could pick up as much apples as they wanted. That of course was something for the children ! 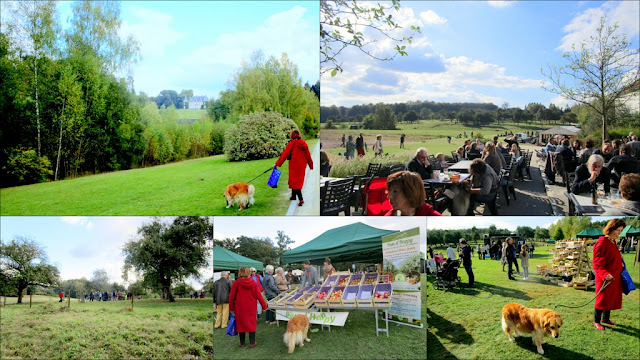 Nicole, Charlie and I went there, we also had brought a bag, but Charlie had taken care of the bag while sitting in the car and had made a big hole in it. Anyway there was nothing which we wanted to buy, Nicole doesn't like apples and I still had a lot at home. But it was nice to walk around, talk with the people and then sat on the terrace of the old farmhouse which today is a nice restaurant.
In the sun it was so warm, that we could take off our coats.

When the sun slowly disappeared it got cooler and we returned home.
Posted by Gattina at 07:00

I hate shopping on a Saturday when the shops are busy. Nice to get out even when it's cool at this time of year. Have a good week.

Such lovely photos from the Apple fest! I guess Charlie thought you didn't need to bring apples home, haha :-)

Naughty Charlie, he's always up to something :)