1.  The week started with sunny but cold weather ! I had to go to the bank to ask for a new cash card, because on mine the chip didn't work anymore. That was very annoying because I never carry a lot of cash with me and I couldn't pay the restaurant so Nicole had to borrow me some money ! I don't know how it is in your countries, but here more and more branches of big banks are closed and employees loose their jobs. We the clients have to line up for special services because there is only one person and wait for hours ! It took not exactly one, but half an hour certainly, and then you have to pay for administration fees ! Banks are thieves ! Not only we have to do their jobs on internet, but also wait for hours like in a little village bakery ! At least there you can chat with the people in a bank they all make sour faces !

2. Of course I had to try the  new temporary card, and started window shopping. I had discovered a new boutique which sold clothes in a special style, it all looked a bit vintage and out of the 70th. I found a beautiful red blouse, in cotton with some golden embroidery for special occasions. With the upcoming year's end festivities, I have at least something !

3. It was time again to drive my neighbor to the hospital for her eye shot. This time there was also check up, which I didn't know, so I spent the whole afternoon in this hospital waiting for her. We arrived at 2 and left at 5 pm ! After a while I was fed up and fortunately found a café with internet connection so I could at least answer all comments on my tablet. When you are in good health a hospital is a rather depressive place to stay !

4. Nicole's kitchen is nearly empty, and the new furniture will be delivered end of the month, meanwhile she has to go out for lunch or warm up plates in the micro wave. She has a very nice multifunctional micro wave which she has at least for 4 years but had never used it she warmed up all things in a traditional way. She said she was too lazy to read the notice book, it all seemed so complicated ! So we met for lunch, and afterwards had a coffee in her home. Meanwhile she had read the notice book of the micro wave and found it so easy ! Now she is angry that she hasn't used it before. We had lunch in the Carrefour store, and they have a new service now, they also do take away ! That was ideal for me, I bought a plate for Mr. G. and he was very happy with it ! 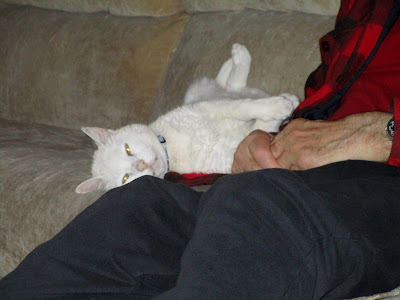 Both with a full belly !

5. On the 11th we have celebrated our 47th wedding anniversary ! Can't believe it ! Only 3 years to go and it will be half a century that I am with the same man ! I think couples like us, become rather seldom species ! For the occasion I dragged Mr. G. out of the house in "my" Chinese restaurant where he could eat as much as he wanted (all you can eat) and he ate !!  With two big bellies we returned home !

more participants here at FIVE ON FRIDAY
Posted by Gattina at 17:52

They are making so many cut backs in the banks in the UK too. I think a lot of young people do their banking on line so the need for so many banks is less. I prefer to do my banking the old fashioned way. Congratulations on 47 years of marriage, wishing you many more happy years together.

Congratulations on being married for 47 years ... good for you both! Cheers Hilary

You have a very good eye for spotting out of the ordinary clothes that make you look so fashionable. Many congratulations on your anniversary.

Happy Anniversary, belated. Long marriages for our age group actually aren't so rare over here -- At our resort in Florida every three years they have a special celebration for all couples who have been married 50 years or more -- we have already been twice (having been married 59 years this Fall).

It's funny about your friend and her microwave -- when all else fails, read he directions! But I shouldn't laugh at her, because I am just the same about my IPAD and camera and smart phone -- I only use about half of what's available, if that much.

Happy anniversary. I hope Arthur got you a special gift.
Yes, I think we all hate banks. You have to pay for every service they provide these days.

We complain endlessly about our banks, but we don't have waiting times like you experienced. Happy anniversary.

Yep banks are closing all around us here, very sad. But congratulations on 47 years, wonderful x

Awww I love the "full belly" photo :-)
Happy 47th wedding anniversary! I wish you many many more happy years to celebrate!

47 years! Congratulations! You defintitely should be celebrating :)

I hope you can stop by:

Many banks are closing here in the UK too, particularly in more rural areas which makes life very difficult. Your 47th wedding anniversary is a great achievement, many congratulations. Good excuse for a BIG party when you reach 50!

Well - where's the photo of that new blouse? We want to see it.

We live in a small town and our bank is always quick and easy. We had our 51st wedding anniversary and you're right, not many have been married that long.

Happy Anniversary! I just stopped to do the math and figured that my husband and I would have been married for 45 years in November had he not died seven years ago, but I am grateful for the 38 years we did have together. Isn't it strange that waiting at banks and hospitals can be so tiresome, but big anniversaries can seem to appear in a flash :)

Congratulations on 47 years of marriage. That's a wonderful milestone, and I wish you many more years together. We are approaching 40 and my parents just celebrated 61!
Banks seem to doing less for their customers and charging more for it all over the world. It's the same here in Canada, too.
Have a great weekend.

Happy Anniversary! Hospitals are depressing places and not good for those who are well. So nice of you to take your neighbor for her appointment. Window shopping is fun and banks are a necessary evil -- I guess. Have a lovely week!

Congratulations on your anniversary! Wow, 47 years is quite a milestone! I hate when appointments take hours, especially when you didn't know beforehand that they were going to take so long.