The summer weather continues I purr like a cat ! I did some laundry and when I took it out I found this

First I didn't know which medication it was and then I could read "Aspirine". Now I have freshly washed and clean Aspirin in our home pharmacy.

One of Mr. G's card club players, has started to work on a computer. So he had helped her to install everything and also Picasa. Now he is good for all technical things, but when it comes to photo programs he has no clue ! On Saturday she invited us for a coffee and at the same time I explained how to work with Picasa. 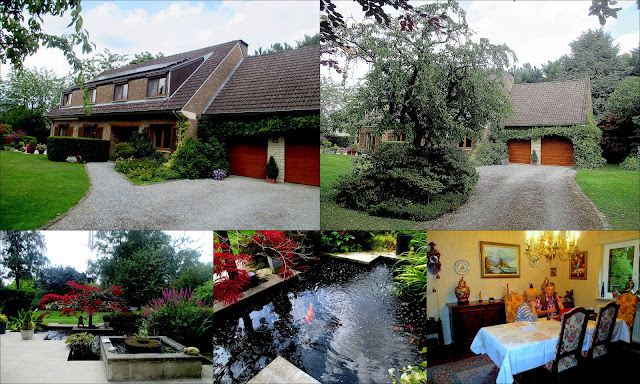 She lives in this beautiful house, now as a widow since two years. I have to say that in Belgium the houses and apartments are far bigger than in other European countries. We are very spoiled. What is called big in the UK, Germany, Italy and the Netherlands is an average house in Belgium. We had a very nice afternoon and she loved to learn how Picasa works so it was real fun to explain.

On our way back we stopped at a Greek's take away and I bought two meals, which we ate while watching the News and they were delicious ! 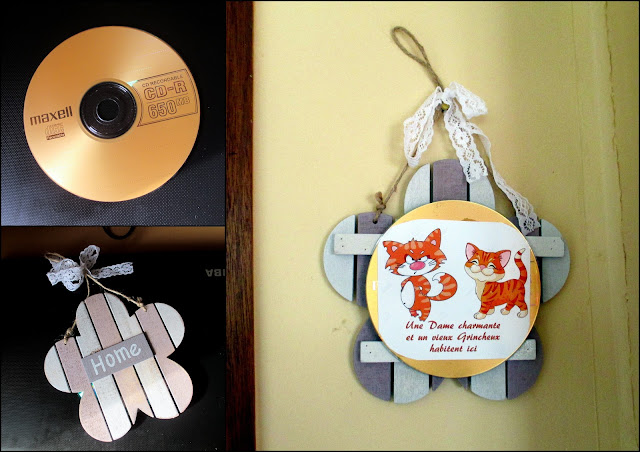 To put my photo on the wooden sign, I took a CD, and glued the picture on it and then the CD on the wood. I was quite satisfied with the result and Mr. G. hang it up at the entrance !

In the afternoon, it rained a bit, but nevertheless Nicole and I wanted to have a look at the flea market which took place in a town nearby. 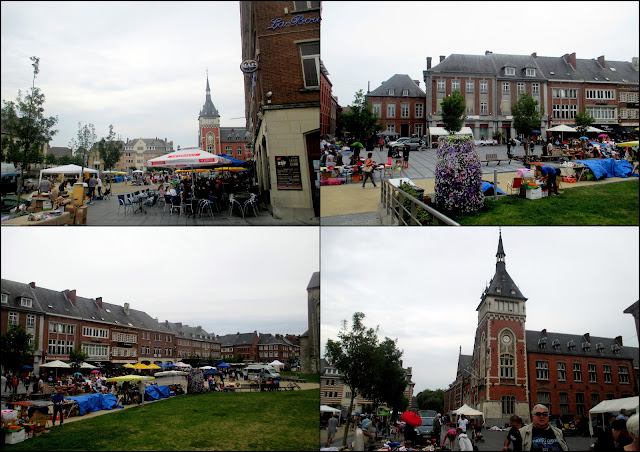 There were lots of stands around the church and the city hall. 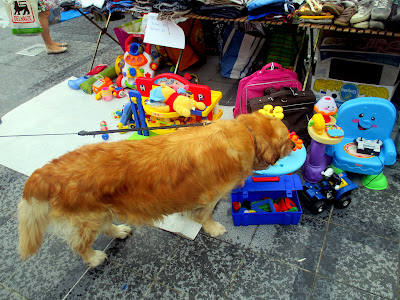 Charlie of course was with us and pulled us from toy stand to toy stand, looking for things which squeak and he knows exactly what could squeak ! We could just save a little duck he had taken out ! 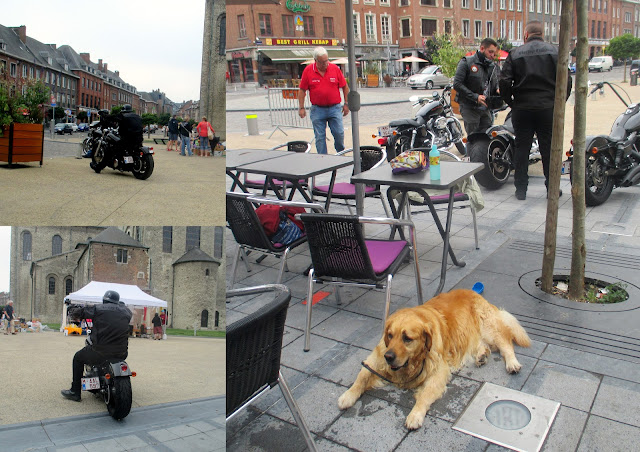 When we sat on the terrace of a café he bravely lay besides the table and didn't move. Unfortunately there were 3 not very respectful Harley Davidson motor bike drivers who made a lot of noise and annoyed all people who sat there. Nicole was gone inside the café and I just could jump up and hold Charlie by his collar, gathering all my strength, he the so sweet and kind dog wanted to attack them and he was barking and growling and showed his impressive teeth. I hesitated for a moment to let him free, as these three guys were really very impolite and utterly ruthless. A little bite in their legs would have done them very good ! But I am a peaceful girl and I refrained from this idea.

It was nice to watch people, meanwhile the sun had come out and as it was getting late, we returned home.

You are so right. A little taste of leg for Charlie might have moved those riders on very quickly.

You need a gun and simply shoot the motor cycle riders. Bang, bang, bang, problem gone. Ok, too extreme. Just shoot them in the legs.

Your husband's card friend's house does look very large. Your sign is great.

Sounds you have a wonderfull summer now! Here The temperature was less hard today and we could a little move better ! Charly is the best dog of the world ! You can say it to Nicole !

Sounds like you had an enjoyable weekend. I like your sign :) ON Saturday we were at the beach and suddenly the sky turned black and we had tornado-like winds. Strange. Today it rained again and it feels cooler, so I am happy.

You always have fun! We tend to stay around home on weekends unless on of our kids or grands has invited us to do something. If we don't have anything planned we do our household chores on the weekend so that we can play during the week when places aren't so crowded. Most of our old retired friends are the same.

At least with Asperine in the wash, your clothes won't get a headache easily! Your homes are beautiful in Belgium. And your sign is excellent. Ironic that Mr G put it up for you - did he do it with a smile?? I love the way Charlie wants to bite the squeaky toys. Our pup is just like that. OMW We don't like Harley riders - they're mostly arrogant and it's a pity you didn't let Charlie take a piece out of those bikers' legs. Grrr. Go Charlie!