It must be a sign of getting older, because memories come back parts of of my childhood which I thought I had long forgotten or they had completely disappeared. For years and years I have never thought about my childhood or only when it was related to people but not at all how I spent my time as a child.

I was seven when my parents moved to Bonn the ancient capital of Germany. Bonn had been severely damaged through WW II and when we arrived in 1951 there were still a lot of traces of the war end.

Luckily we lived in a range of apartment houses which had been quickly built for the employees of the new Government. Although we had no central heating and the apartment was heated by a tiled stove in which my father put coal, he carried up from the basement, we, compared to others lived in luxury. All the people  who lived there had lost their homes and sometimes even castles there was no social gap we were all sitting in the same boat. But this I only realized later  when I learned that the father of one of my classmates was the daughter of  Graf Stauffenberg. He had been shot after an attempt to kill Hitler. I only remember her mother and their apartment which looked exactly the same as ours.

As I had lived with my grandparents in the countryside I had never seen completely bombed out cities.

We were surrounded by houses still in ruins, with broken windows and empty. Often the owners lived in their basement in which they had stored their furniture and belongings. I found this very romantic  when I went visiting  my school friends living in a basement under their damaged houses. I had no idea why our city looked like that and to me it was completely normal.

We had a lot of fun with playing in the ruins, nobody cared, people had other things to do than paying attention to what their kids did after school. We had our own Disney Land, and all famous attraction parks for children, we had the best and it was free ! We climbed in the ruins, discovered basements where we sometimes found plates, cutlery and toys. There was one which was our favorite. It must have been a beautiful mansion with a huge garden around. The kitchen was still standing so we pretended to cook for our dolls. The basement was full of interesting stuff to play with and the now wild growing garden was the perfect playground. Nobody ever thought that it could be dangerous, we had such a lot of fun. 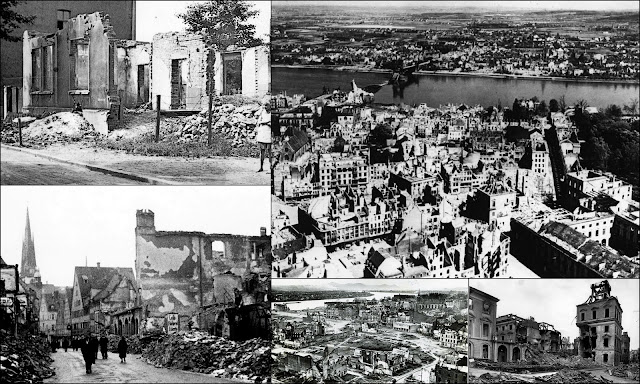 Bonn still looked a bit like in this collage when I arrived, except the rubble was gone and the city center had been restored. But a little outside there were still facades standing as shown in the picture above left. The street where we lived was not far away from the church in the picture below left. I recognized the street immediately when I saw it on Internet. Of course the street had been cleaned and repaired when we arrived.

We had such a lot to play with, we didn't need playgrounds, every day we had other adventures and were rather sad when they started to demolish ruins and built new houses. What a disappointment for a little child ! 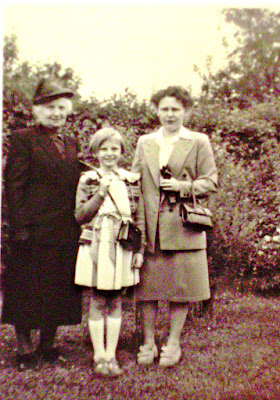 This is me at that time together with my mother and my paternal grandma. We never realized that our parents had a completely other view on this situation, we had not to struggle to get food on the table or providing clothes. My parents also were lucky to have my mother's sister who had married an American and sent us parcels with goodies and the most wonderful clothes for me ! I was always dressed like a princess which I of course took for granted. Other girls were not so lucky and had to run around in old self made clothes.

I really wonder why all these memories came into my mind only recently. When I was a young woman and heard old people always talking about their childhood memories, I found that rather boring. Now I do the same !

Such incredible and interesting memories. These must be preserved for Toby. I think you look a bit like your grandma. I had a very different childhood but now I find my self talking about those long ago days too.

Yes, it must have something to do with getting older. You start looking back more often. Children take things for granted indeed, I saw lately some pictures of Amsterdam from 1950 and realized that looked so poor with half demolished houses. We had no bombings, only on Rotterdam, but people had demolished the houses of the deported Jews to get some wood for in their stove. I am a little younger than you, from after the war, but I remember very well the empty spaces in town. Only in the sixties they started to build some new houses.

Hi Gattina - memories .. they do come back and we add to our knowledge a little through other photos and input. I remember the Nissen huts that housed people - and had housed service men and women - I'm not sure how long they stayed as housing units.

I know an area that was designated for demolition this year, as been prevented for the 'time being' .. as a monument/museum to those times.

I remember the compulsorily purchased terraced housing along the A40 road into London from Oxford (starting on the outskirts of London) getting gloomier and gloomier as 'they' waited for everyone to die off ... so they could actually build the road.

I don't remember empty areas in London - but I probably didn't pay much attention, as I never lived there til the 1970s.

Your smile is still the same!! Love the photo .. cheers Hilary

Really good post, Gattina. R tells me how he used to play in bomb shelters in England in the mid 50s when he was a child. We saw the same tiled stove at our friends' Jane and Lance Hattat in Budapest.

This is amazing history and I'm so glad you're sharing it with us.

Then I 'm old too....Anyway, thanks for sharing your private memories...

You do start to look back, don't you? I certainly have.

I love these memories of yours that are so different from my childhood in rural Pennsylvania.

Thank you for sharing them.

And very interesting memories they are. Isn't it interesting how children always seem to adapt to circumstances the best? To you, the ruins were just one big playground.

Such a good read. Thanks.

I think these are amazing memories. I am glad you shared. People who live in the USA are very lucky that it's been 150 years since there was war on our soil. We forget that sometimes.

This was so interesting to me! It was more removed for us of course -- I remember my dad leaving when he joined the Navy during the War... but it all just seemed normal to me. Parents didn't burden kids with their problems.

My father hated to talk about childhood memories and didn't even want my mom to do so (even after I was grown and interested)... He thought it was better to keep up with the present and I understood how he felt (he didn't want to be an old person living in the past), but I wish they had shared more.

The trick is to do both -- remember and still live for today!!!

I'm so glad you are writing these memories down (yours are such a huge part of history). Someday your son (when he is not so busy) and your grandson (when he is older) will want to know about all of that.

Thank you for sharing your story. Reading it has me realizing how fortunate I am to have not ever know war or the after effects of war firsthand.
The View from the Top of the Ladder

I think memories are very important but up until now my kids were not so much in agreement. Then they got into their thirties and things have started to change.