When I started driving a car I was 21 and probably the only girl around who drove a car in 1965. With the driving I had no problems,  but reading a map was another thing. 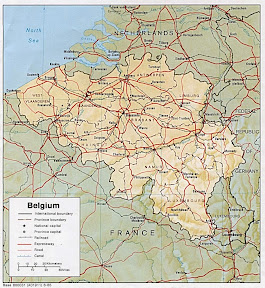 Where to find my way in this cobweb ?

If I had to drive other ways than the once I was used too and looked at the map, I was lost. I found the street, but I didn't know how to get there. Impossible to find my way on all these little lines on a map ! I didn't know where I was and what streets I had to take. The map remained on the side seat and I stopped several times to ask where to go.

When we went on holidays to Italy or elsewhere, Mr. G. gave me the map and asked me to show him where to go. I still didn't find where I was, I didn't know where North, South, East and West was with the result that it always came to discussions and explanations which I didn't understand and Mr. G. had to stop the car and look on the map himself.

The worst was when we travelled through the States with a rented car several times and I always had the map on my lap without knowing how to read it ! Again the same he had to stop to find the way. Later it got better because our son took the map reading over.

Getting older it became worse and finally I only took the ways I knew and didn't dare to go elsewhere alone without somebody who could read a map ! I had a car could go everywhere but I got always lost. I gave up.

Then a miracle happened somebody had invented the GPS ! That was the deliverance of all my problems ! As soon as I knew exactly what it was, I bought one and with it my freedom !

Now I drive everywhere to France, Germany or the Netherlands without any fear not to find the right way or exit on the highways ! I had a gentle voice with me who told me where to go. Sometimes we disagree and we fight but I always arrive at destination ! What a relief ! I felt like a blind person who got a dog to guide !

I can't understand how people cannot read maps. You are not alone. Mind I do have one kind of map problem, which I will write about in a week or so.

Now you can use your smart phone to do the same thing and it is always up to date.

I can read maps but I used to ride with someone who simply would not stop to let me get my bearings so I could tell him which way to turn next. A GPS would have helped a LOT!

I was never any good at reading maps and my hubby is excellent at it! I am grateful I have my smart phone today and it helps me a lot! Occasionally it is wrong too! HaHa! Nothing is perfect in our lives! I do love maps though and enjoy finding place I would love to visit on them. Thanks for this share. I don't feel so alone now. Blessings, Anne

I'm not a bad map reader but I sometimes have to turn it upside down to work out whether I need to turn left or right!

I never did learn to read a map either. Even after we were on the road most of the time for over ten years! I love our GPS too. Bill argues with "her" but I always obey her ;))

Glad the GPS works for you. I actually got a call from my family once because the GPS didn't know about road construction. I had to get out a map and guide them through the city.