MY WEEKEND OF AUGUST 30

What a difference between last weekend and this one ! Instead of sitting outside as it is usually possible in August, even in Belgium, it rained ! 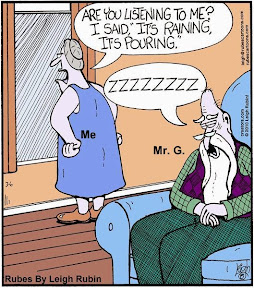 It rained so much that I just jumped in my car, in the shop, filled the caddie with food and drove home ! I could have taken pictures of umbrellas in all colors but I didn't. 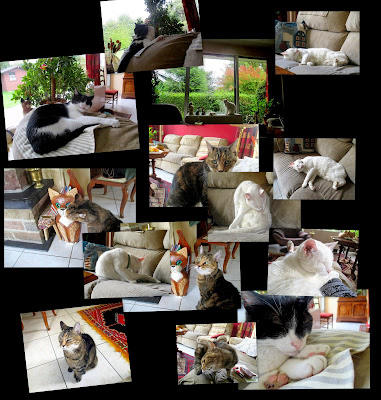 Instead I took pictures of my cats, I had run out of cat pictures, for my cat blog ! That happens as I was away. I could hardly take pictures of Mr. G. as he is always in the same position, or behind his computer or behind the TV.

Anyway I also did the laundry, baked a bread and discovered photo tools on Internet which I had to try out. And suddenly the day was over.

On Sunday I had to go to the midi market to buy 3 other pairs of my colorful trousers for my friend in Eastbourne. I was lucky to find the right once, apparently they start already with the winter clothes and the summer things disappear. I also bought some fruits and then sat down in my usual café for a tea. There was an English couple who sat at my table and we started to speak, they live already 30 years in Belgium, and just in the next little town besides Waterloo. We were joined by two Philippine ladies who also spoke English. The old accordion man who always plays there each Sunday started to play "Rock around the Clock" and other Rock an Rolls and we all moved to the music on our chairs and we had a lot of fun. On my way back to the bus I slipped on the wet pavement and fell like a hot potato on the ground. A Moroccan lady helped me up and sat me on a bench. The others around just starred without moving. Makes me think that Allah is not so bad !

I had twisted my leg and my foot hurt. After a while I got up hoppled over the street to the next shoe stand and bought a pair of shoes which didn't slip. It was just the end of the market and the guy wanted to get rid of all his shoes so he sold them all for 5 Euros (6.60 $) what a bargain and they are real nice leather shoes. I hoppled back to the bus station and went home.

No Waterloo city street party which took place today, I couldn't walk ! I lay the rest of the day on the sofa and watched TV, only interrupted by Dominique's visit who had come back from Sicily this night and picked up her canary who had spent its holidays in our guest room. Fortunately cat Arthur is so used to the bird now, that he doesn't try anymore to break into the room.

On Monday school holidays are finished in whole Belgium and all my activities start again too. Unfortunately I can't go to aqua gym, because I  can't hop around in the swimming pool ! I have to rest my leg and Mr. G. has to do the house jogging for once.

Ah sorry about your foot injury. I hope it heals soon. You had a more hectic weekend than the preceding holiday in France! Rest up and watch Mr G do the house chores.

Hi Gattina - it's been foul hasn't it .. but you settled in to getting out and about quite happily ... though I hope your leg/foot heals up and you don't have to hobble anymore ...

What a nuisance to be unable to move around. Hope you become mobile again before to long. I know you won't be too happy having to sit around and not get out and about as usual.

That is not good news. But it is an opportunity to call on the services of Mr G to wait on you.

Hope your leg feels better soon. It is terrible having to sit around all day. Well, maybe not so terrible if Mr G has to do everything :)

I hope you get better with your foot! Nice you found still the nice pants for Anne!