1. Monday night we had a terrible thunderstorm. 26.000 lightenings were counted over Belgium. 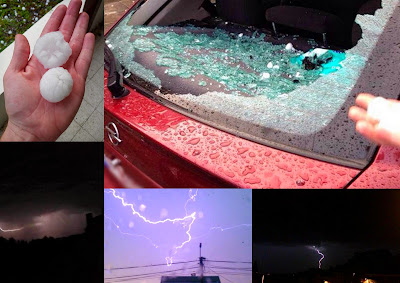 Hail as big as tennis balls fell down, damaging cars and roofs. In some areas there was flooding and the firemen had a lot to do. Dominique had left her quite heavy umbrella standing in her garden and the next morning it had disappeared. I helped her looking for it and we found it finally in the little wood besides her house !

And you know what I did .... I slept ! I haven't heard or seen anything, I saw it the next morning in the news.

2. My friend Chantal came for a visit to show me her pictures she had taken in Dubai. She had been there for 10 days staying in the flat of her son's friend who works there. She was so enthusiastic about the unbelievable luxury in this artificial city. Her sons went skiing on real snow and had even penguins there and when they came out they could swim in an enormous swimming pool in 30°C (86 F) ! I admired the pictures but found this city awful and ugly with no soul and a lot of bling bling ! Ferraris, Jaguars etc where as common as normal cars here. I don't want to see the reverse of this decor the poors must be very poor ! Nothing for me !

3. I had discovered a new feature (or maybe it's an old one) on my computer, I could take "selfies" ! I caught my cat Arthur 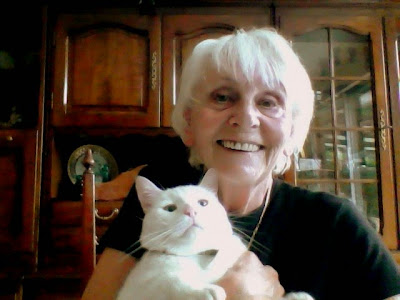 and tried to make a picture, Arthur struggled and didn't want to pose, the result was this !

4. End of June Ilona, Nicole, Dominique and I will go to Cornwall and visit the area on an old steam train. I invited them for a meeting to prepare our trip and give them all documents I had gotten per email. There was a pile of paper on the table when suddenly a puff of wind blew all papers away and on the lawn ! The four of us got up like flashes and collected the papers which were all over the grass. Then we had a blueberry cake and coffee. We had a very cheerful afternoon and are now looking forward to our trip.

Mr. G. is still in Italy with son and grandson and they skyped me. The weather was as hot as here so I really had no regrets ! I am enjoying my holidays too.

5. For the first time since I attend my painting class, there was nobody who could create a poster for our yearly painting exhibition. I thought I give it a try and made one. 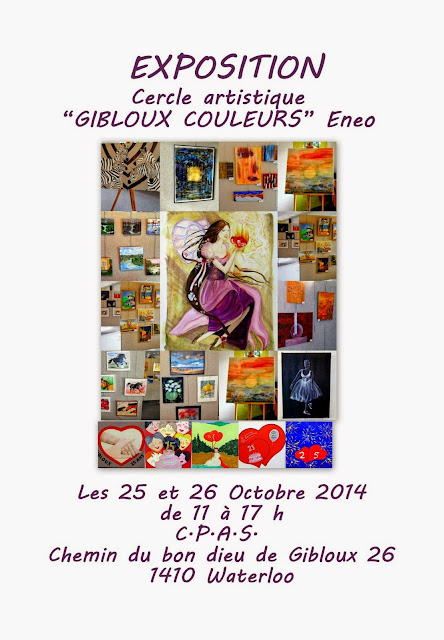 It was approved by all and will be hanging in the City Hall and other official places and in stores, boutiques and private houses, all over Waterloo. I would lie if I would say that I am not a little proud.