MY WEEKEND OF MAY 17

As the sun was shining I had no excuse anymore to avoid garden work ! Most of my friends love to work in their yard, and it is a hobby and a relaxation to them. For me it is a chore I don't like at all, but have to do it. 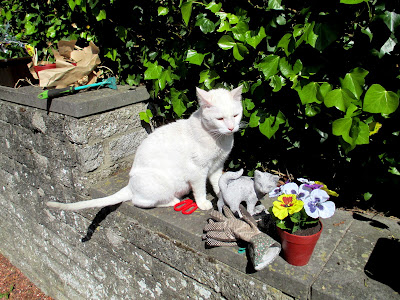 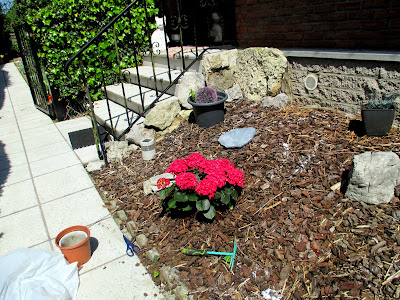 Under the watchful eyes of my cat Arthur, I pulled out weeds and planted a new Hortensia at our entrance. The one which stood there for 36 years and which had bloomed each year, suddenly died and Mr. G. had to take it out. I hope the new one will grow the same way !

My neighbor saw me working and came out and we started to chat. I told her about my adventures in Normandy, as I hadn't seen her yet since I came back. As it lasted and lasted her daughter brought her a camping chair and I sat on the steps. We had a nice pow how and people who walked by laughed when they saw us. When finally she crossed the street and went home with her chair, I wasn't up for continuing, gathered my things and put them in the Garage. Then I made myself a coffee and took a sunbath in the garden. Mr. G. sunshine or rain, always prefers to stay inside. 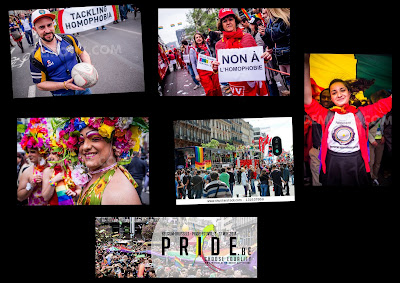 And while I was staying peacefully at home Brussels center was completely closed to cars. There was the Belgian Pride Color parade, for the equality of homosexuals. About 45.000 people were on the streets watching the parade and even our prime minister who is also homosexual was there. In some African countries but also in Russia they are still persecuted and killed.

On Sunday morning I went to the midi market in Brussels. 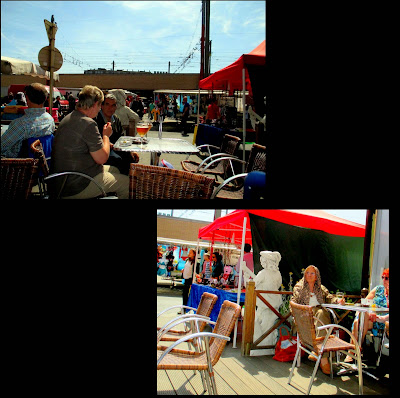 There were lots of people of all countries. They enjoyed a glass of wine or beer on the terrace of "my" café. The lady next to me had put her handbag on the floor just besides a little wall and when she wanted to leave the handbag was gone ! A pickpocket had stolen it.  The poor woman had all her money and bank cards in her purse and of course was very upset. Nobody could understand how it disappeared we hadn't noticed anything suspicious. There is no chance to get the purse back !

On my way back in the bus an elderly lady admired my scarf which I had knotted around my head. She wanted to know how I do it ! As she had bought a scarf on the market, I showed her how to put it around her head, fold it and knot it. The whole bus watched and I got an applause ! 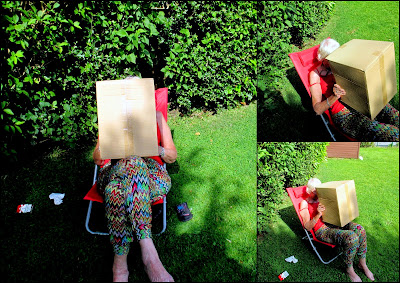 The afternoon I spent in our garden. Mr. G. was rather surprised to find a carton with legs underneath sitting in the chair and took these pictures. I was busy to watch the "New Tricks" series on my Kindle !

I am like MrG and prefer to stay inside and I don't like gardening at all.
We have our 'Gay Pride' in March, always a colourful event.
I rarely wear a scarf as I can never tie them elegantly enough, I need lessons too.

Those last photos made me laugh. I was wondering what you were doing in a cardboard box. I like gardening every now and then.

I don't really care to garden, either. I was just watering today as we haven't had rain in a while and noticing places that needed weeding, but it was too hot to start. I'm like Mr. G. - I much prefer the inside.

I'm not real adept at scarf-tying, either. I got a couple recently and made them look like what I have seen on the Internet but still didn't feel right - I guess I am just not used to them.

I love some gardening chores but it seems there are just too many of the ones that I don't like much like weeding. I adore taking my camera around looking for things to photograph though, blogging makes it a lot more fun. I also chuckle at the cardboard box, I don't have a kindle but have a horrible time seeing my phone screen outdoors. What an idea!

Gardening can be a lot of work but looking back at it completed, it is wonderful. There is nothing more relaxing then sitting back in a garden reading a good book.

How sad the woman's purse was stolen. I can't begin to imagine her angst. When do we get to see you wearing your now-famous scarf?

I think it will be great when gay people are so well-accepted that it isn't even necessary to hold special parades -- they will just be ordinary people like all the rest of us. Which is what they are.

I too would rather sit outside and read or watch birds or look at my IPAD than pull weeds. That is one of the reasons why we live where and how we do!

Oh and I love your entertaining the bus with your scarf tying skills -- and I wish you would have one of your friends or Mr G take pictures of you doing that, so I could learn how!