When I raked my brain for a post for this theme I thought about my fear of spiders, which is a phobia and called arachnophobia !

The idea came when this week I had watched a crime movie where a woman was killed with a tarantula ! These spiders are not dangerous for humans they only look ugly and disgusting at least for most of us. 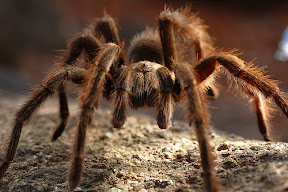 The murderer who knew that his victim was suffering from arachnophobia had put a tarantula in her office and then had locked the door. He only had to wait until this charming beast showed up and did its effect. That's what happened. The woman pushed an awful scream fell on the floor and was dead. She had been literally scared to death and died of a heart attack. Almost the perfect crime, but little tarantula showed up and the investigators understood.

Maybe I wouldn't die, but certainly become hysterical ! I even run away from a mini spider which amuses Mr. G !

There are so many "A" phobias I really was surprised !

Agoraphobia- Fear of open spaces or of being in crowded, public places like markets. Fear of leaving a safe place. (I had an aunt who suffered from this and couldn't even go to her mail box !)

Ablutophobia- Fear of washing or bathing. (Not my case)

Ailurophobia- Fear of cats. (Certainly not, I have four !)

Amathophobia- Fear of dust. (No, I don't even see dust)

Anthropophobia- Fear of people or society. (Not at all)

Ataxophobia- Fear of disorder or untidiness (same as with dust, I am blind)

and if you want absolutely know from which phobia you suffer just have a look  here I am sure you will find one which suits you !

fun post!
Well, maybe not for some who have arachnophobia. I don't...unless the spiders are really, really big. and really, really near me.
Ailurophobia? never!

I definitly suffer of arachnophobia. Just like you, when I see a spider I run away:)) I know they can`t do much harm, but still...

My son has a bit of arachnophobia.
I also enjoyed learning about the other phobias.
I needed a few more things to be scared of!

I think I have a few phobias but fear of big hairy spiders tops the list even if they are harmless. Some are too big to be flattened by a handy shoe.

Well, too feed your arachnophobia, why don't you check out my post here:

Be sure to click on the pictures for a larger view. :)

I really don't like spiders but I am more fearfall of moths...hmmm...mothophobia?

Or what if you died because moths flew in your mouth?

Thank goodness I'm reading this in the morning.

I would definitely be having nightmares tonight!

I have to admit, I kind of like spiders. Who know there were so many A phobias!

I'm not arachnophobia but in front of this horrible spider I can't speak about my reaction!!!

Dust and disorder? Hmmmm, I've never seen those, either!

I don't mind spiders - it's mice that I am petrified of...

My mom is also deathly afraid of spiders.

I might be a little afraid of spiders, but not phobic. And dust and disorder? Never noticed those in my life! (I actually know a lady whose mother had that phobia -- and she would invite her mom over every time her home needed to be cleaned up.

When I was a kid, we used to play spiders and have them fight on a stick...silly games in Asia, eh?! lol

I have to admit to arachnophobia. I'm afraid of spiders because there is something about my chemistry that makes them go to great lengths to bite me. A spider bite is not a pleasant thing!

Good job I haven't got Ablutephobia this week although I reckon I could have just about all the other phobias - Haha!
Wren x