MY WEEKEND OF JANUARY 18

This weekend was really nice ! First we went to see a play in our City Hall's theater. The play was called "Tics" 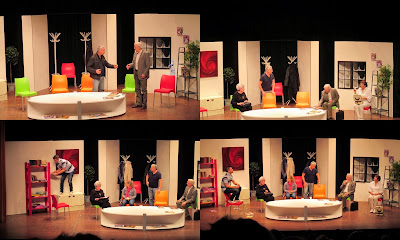 It was hilarious, we came out our bellies hurting. The play described 6 people who had a special tic. The eldest one suffered from the Tourette syndrome, the worst, which means that in the middle of a sentence he suddenly comes up with the exclamation of obscene words or socially inappropriate and derogatory remarks. We really learned a lot of very vulgar words !

The second one was a lady who ran all 2 minutes to the bathroom to wash her hands, the third calculated everything, hours in seconds, years in weeks, hours and seconds, the fourth couldn't walk on the floor because there were lines, the fifth, the young girl always repeated her sentences twice (even when they were very long) and the 6th, the old lady was obsessed that she had forgotten to turn off something in her house and made everybody mad as she always wanted to go home to switch off the light, turn off the gas etc.

All these 6 tics made the play so funny, but it wasn't a stupid humor it was actually rather sad. Nobody would like to have such a disease. Imagine you speak to a mayor for example and put "fu... you" in the middle of a sentence or even worse.

On Saturday morning I met with Cezar and Léia ( Bonjour et Bon Voyage) who were in Brussels because they had driven their son to the airport. His flight was at 6 am and the poor parents had to get up very very early. But still they wanted to meet me and at 8 am they called. They already were in Waterloo, and wanted to have a light breakfast, but Waterloo still sleeps at that time and everything is closed ! A real ghost town ! We met at the Carrefour parking and of course recognized each other immediately, our cars were the only once on the parking ! After a hearty greeting I drove them to the only place which is open in Waterloo for breakfast ... A bakery who had the good idea to also serve breakfast. 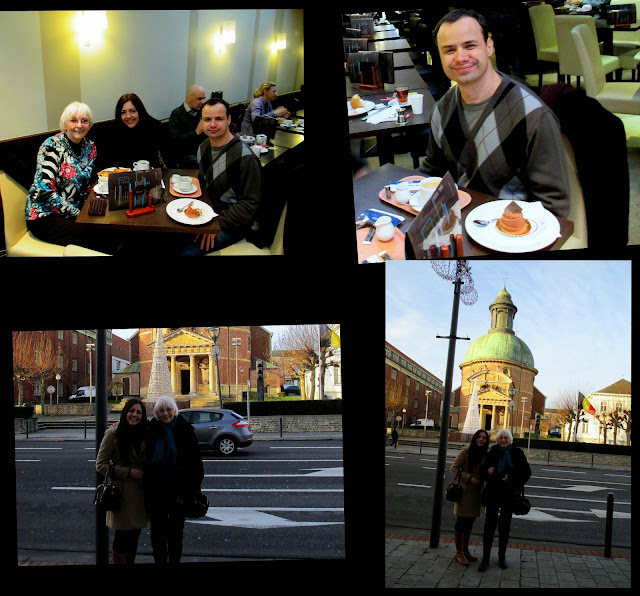 We had a nice coffee with freshly baked croissants and Cezar enjoyed a yummy chocolate cake. It was as if we had known each other in real, ever since we met on our blogs. We chatted and chatted and time went by, I wanted to show them Waterloo and also take them home, but they were so tired that we preferred to do this another time. They originally come from Brazil, and are in Europe since 6 years. First in Luxemburg and then in a real "hole" in the middle of Flanders where people are very narrow minded and not stranger friendly at all. The most famous madhouse of Belgium is located there too and it is a miracle that they didn't become mad ! We just visited the Waterloo church across the street, which is famous because it was the hospital where the wounded soldiers from the Waterloo battle were taken to.

I so much enjoyed their visit and once again thought how wonderful it is that through blogging you meet people from all over the world which probably I would never have met without my "Window to the world" ! 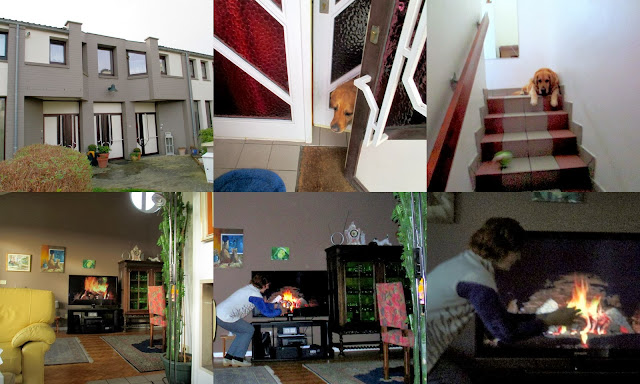 In the afternoon I went to Nicole, was welcomed by Charlie who opened the door for me and then wanted to play with his ball. I had brought a DVD imitating an open fire for her Television, and she was delighted when the logs started to burn and she faked to heat up her hands ! It looks so real and also makes the noises of burning wood. Instead of looking at a dark TV screen, we looked at the burning fire.

On Sunday it was grey cold and windy and not really an inspiring weather to go out. So I spent the day with blogging, sorting out pictures, choose posts from my old blogs to review and correct them as I want to have them printed as a book.  A so said "Best of". That's quite a lot of work since I have to go back to 2006 ! And when I watched TV a stalker watched me too ... Arthur staring at me through the window into the living room ! 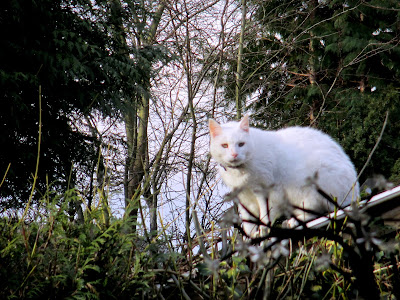 I think Arthur is looking to see if you have a fake fire too.
It seems all roads lead to Brussels, it really is the centre of the world and everyone eventually passes through. Including me.

"choose posts from my old blogs to review and correct them"

Is that why what may be an old post popped up in my reader. It was a nice post about parks and buildings.

It was really a pleasure to meet you in person! :)
You prepared a beautiful collage with the pictures. Thanks for the warm welcome in Waterloo!
hugs
Cezar & Léia

It sounds like you had a great weekend. I think it's always nice to meet fellow bloggers, but I have only met two so far.

That play sounded very interesting. It must be so hard to live with a disorder of any kind. I agree with you about blogging friends. Look forward to hopefully meeting up again.

I am home and settling in again. I just tried to comment and was rejected. I hope this gets through. If not I will write you privately.

Thank goodness the stalker was cute and cuddly :)

Dear Arthur, I love him as I met him when I first started blogging in about 2006, too!

I have met fellow bloggers, too, and have become good friends with them. It's a lovely way to meet people because you have one thing in common from the start...blogging. Then you go on to find other things in common, or fascinating differences.

I love the idea of a DVD of an open fire. How clever of someone to think that up.

How nice it is to meet your blogfriends! When you spend years reading each other, it seems you know very well people! Your idea editing a book with your blog is fantastic!

I forgit to say that on saturday I will go to the theater too with a friend and the tittle is: Ma soeur est un boulet! Sounds good, no?!