1.What a boring week ! On Monday morning after a rather sleepless night with wild dreams I don't remember, I felt so lousy that I took my temperature and I had 38.5°C (101 F) ! That was fever. It didn't worry me too much because I belong to the people who have high fever or nothing.

Mr. G. called the doctor, he stated that I had a relapse of my bronchitis I had just before I went on my UK tour. All this is Shakespeare's fault and the cat in Stratford upon Avon (see post below) It was so sunny that I forgot the wind and hadn't dressed properly.

2. Mr. G is a very efficient nurse, he ran to the pharmacy got everything for me and informed all people around that his poor wife was almost dying in her bed ! Then he watched with eagle eyes that I took my medication  in time and checked twice, with the result that he got on my nerves. He also popped in all 5 min to ask if I am feeling better, which made me feeling worse. I like to be alone hide in a corner (in this case behind my computer) and suffer in silence until I feel better.Don't tell me what a kind and loving husband he is, he makes me think of people who ask sleeping people if they are sleeping ! 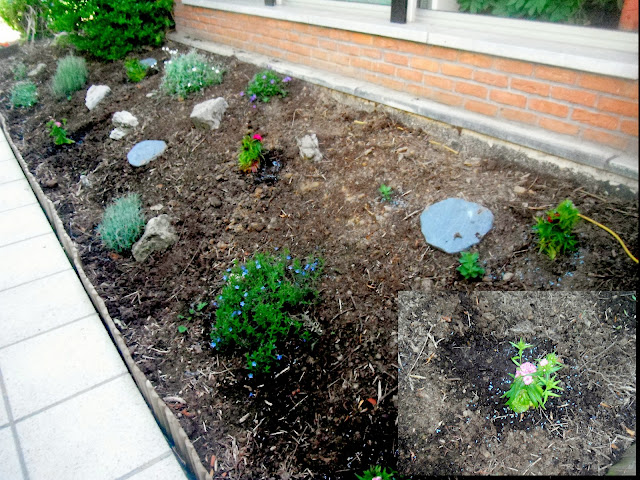 The flowers I had bought needed to be planted so with waggling knees and under the watchful eyes of Mr. G. I managed to put them in the earth. They should spread out and cover the earth completely. Then exhausted I watched TV. Mr. G. tidied up behind me and after this big effort collapsed himself. What a couple !

4. I had a lot of phone calls from friends and neighbors who wanted to know if I was still alive. I was.
Dominique visited me keeping "long distance" to bring over her "Piou Piou" the canary  which will stay with us for 10 days in the guest room, far away from the cats. 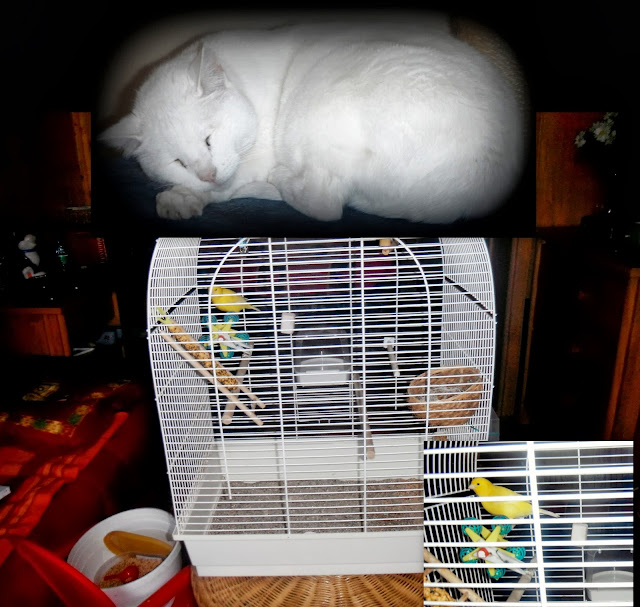 Still Arthur once managed to sneak in and slept on the cage ! The canary didn't mind. It looked almost like that, only that his head and the paws were hanging over the cage !

5. I had to go for my car check up, and I drove to the Garage. Mr. G. followed me and dropped me off at Nicole's for a drink until my car would be ready. I arrived and felt as if I had climbed the Mount Everest ! 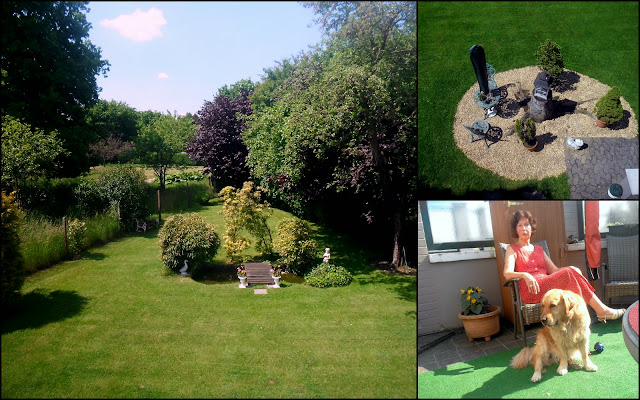 We sat on her terrace and I admired the beautiful garden of her neighbor who is 82 and has no gardener !!
I told her about my UK trip and if I am not too weak maybe I will join her on Sunday at the Belgian coast where she has a flat at the seafront. The air of the seaside is always good for an ending bronchitis !
Posted by Gattina at 07:00

Arthur should leave the canary alone and help Mr G look after you. I hope your bronchitis is better soon.

Mr G is the opposite to TOH. If I am sick he disappears. Too bad if I need anything or keel over, he would never know.

I have the same husband: he'd ask if I was asleep the minute I fell asleep after tossing and turning with fever and then disappear to tell everyone how sick I am! I simply LOVE the photo of Arthur on top of the canary's cage! Please take care of yourself - be sure to get some Vit D at the seaside for sure! (((Hugs))) Jo

Lovely photos and hope your'e feeling better! I've been righting off that bronchial cough for over 3 weeks now.

It's tough being sick I hate it. lol
But even though it's a pain in the ass, a loving husband is always good to have around lol At least he cares.
You are a tough bird as well.
Hard to watch over, with everything you do lol

Love the garden of Simone! When I thing she works and do all by herself! And what a result! Nicole can enjoy the beautiful landscape from her terrace every day! Take care, Gattina! Mélissa takes medecin too for the same reasons! But the cause is she took a bath in the Mediterranean sea and the temperature of the sea wasn't the right one!! Still too cold!

Having the yuckies is no fun

Feel better soon! That weekend on the coast sounds great.