1. As I expected our guests from the French Riviera, my friend Claudie and her husband, I had quiet a lot of shopping to do.

2. You also clean and do things, which you only do under pressure, at least that's my case otherwise I always tell myself, I will do this tomorrow. That's why I finally pulled out the weeds which grew cheerfully in our gravel in front of the house.

3. I have known Claudie through blogging about our cats. Then we became blogfriends, and  we met for the first time "life" in April 2011, when she invited me for a week. She then came for a visit with her daughter in August the same year, and I went again for a week in February this year. 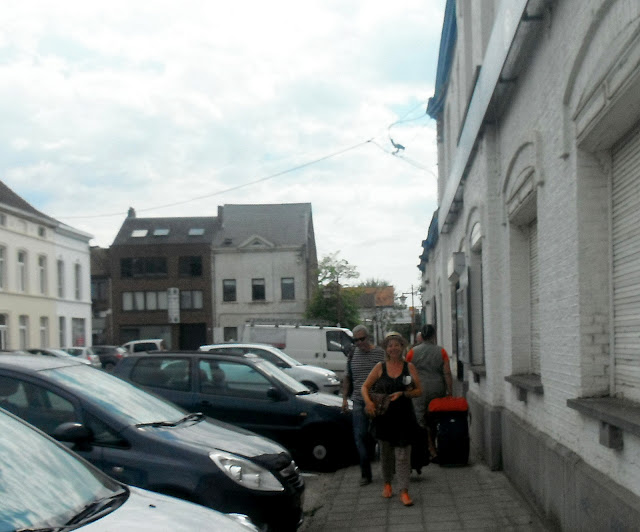 and finally they arrived and I picked them up at the Waterloo station ! 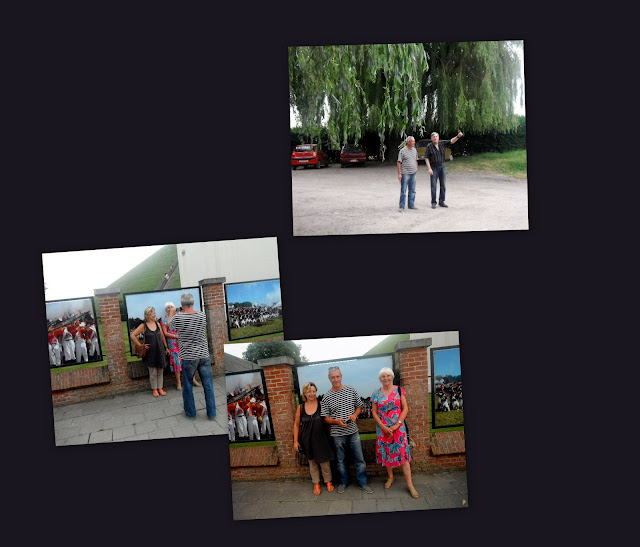 After a fresh cool Belgian beer we visited the Waterloo battle field, and the British Lion who sat on his hill turning his head towards France, as Napoleon had lost the battle here against Wellington and his allies. While Pierre took pictures of us, Mr. G. took pictures of him and then we posed together. 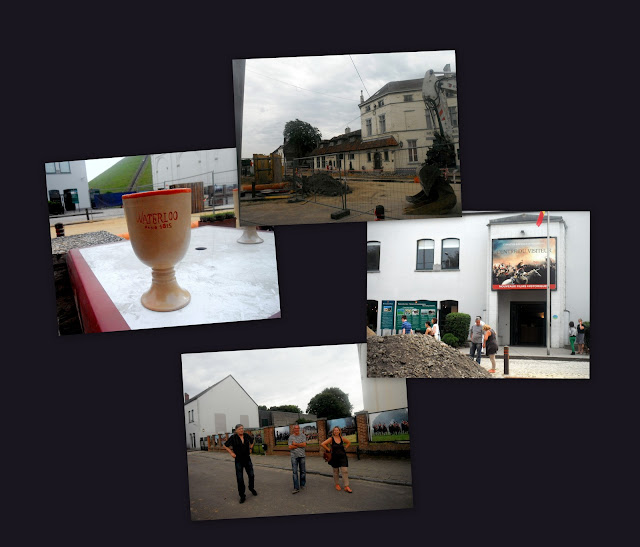 Unfortunately the site was in quiet a mess, as it will be completely renovated to attract more tourists. The total cost of this renovation will be around 40 million € ( 49.000.000 $) I hope the result will justify this amount. Finally it comes partly from our city taxes ! After visiting we then tried the good "Waterloo" beer, especially brewed for this historic place. 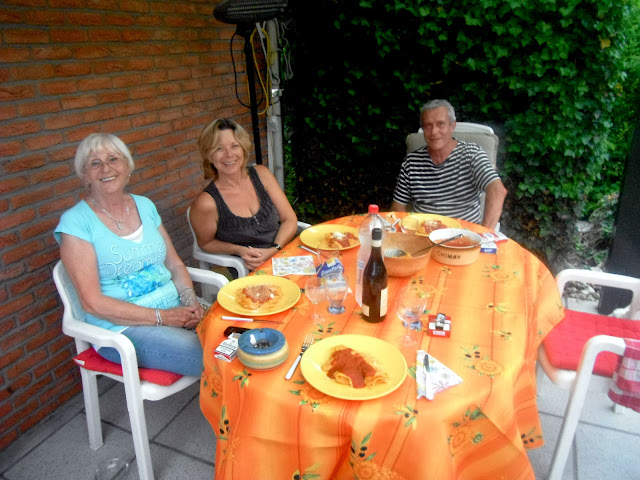 After Mr. G's prepared supper of Tortellini filled with salmon we had an Italian icecream and chatted the rest of the evening. We had beautiful warm or even hot weather 30°C (86 F) and it was great to sit outside ! It was the first time this year that we could eat on the terrace ! The weather had always been so cold and rainy.

5. The next day I took them to Brussels, to the hill where once the gallow was and now the Palace of justice. From there you have a wonderful view over whole Brussels. 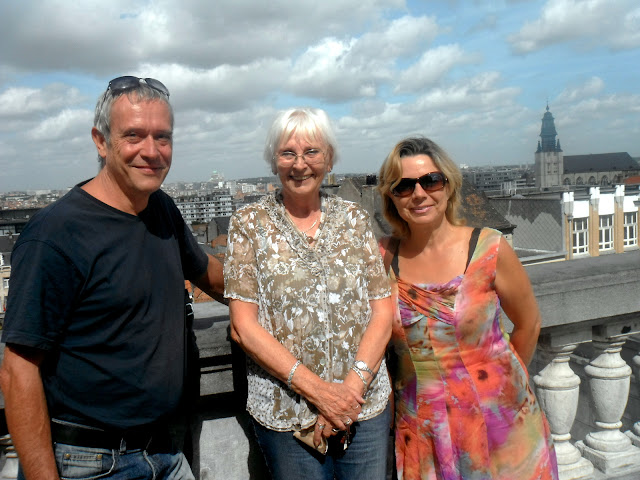 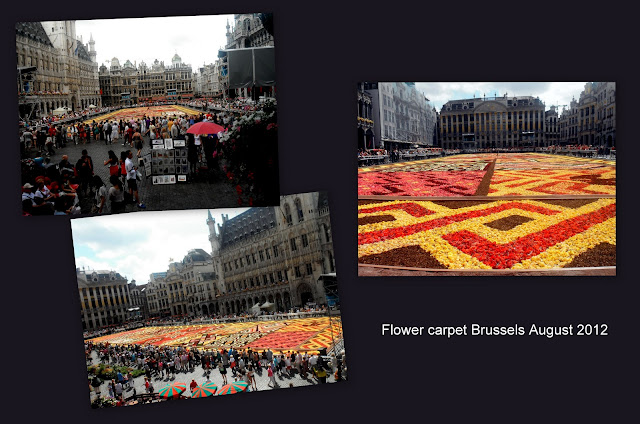 Then we went to the Grand'Place, where the flower carpet was desplayed as they do each two years. This year the theme was "African" and about one million flowers were used. It is absolutely spectacular ! 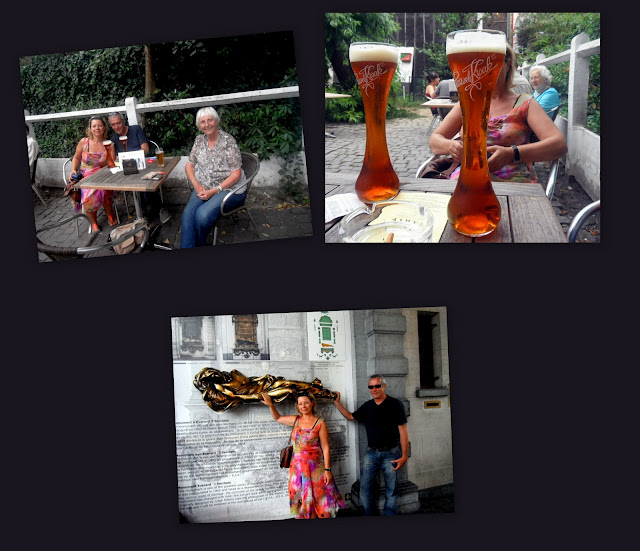 Then we walked through the little streets had some chips and  they had a special Belgian beer called "Kwak" in the old Toone puppet theatre which also has a little garden. It was amazing to sit in the middle of a huge crowd and noisy streets suddenly in such a quiet nice place. The evening ended with a typical Belgian plate, a Stoemp with sausages. It's more a plate for winter, but they wanted only eat and drink Belgian things. They already tried 6 Belgian beers, Leffe, Chimey, Waterloo, Kriek, Bush, and Kwak !

We had a lot of fun together.

I love your dress in the first photo. You are a great hostess wether for 2 hours or longer you know the best places to show. The flower carpet is beautiful.

I am so pleased that you at last are enjoying some hot and sunny weather, especially for your guests arrival. That is indeed a lot of money to be spending on renovations, but I guess as a famous historical site it will soon earn that back.

I like you in that lovely dress, of course, you have a beautiful figure to wear it.

oh what a fun week you had with your blogging friend!! I enjoyed all your pretty pics....Brussels looks like a very beautiful place. My husband would enjoy trying all those different beers!! :)

Wonderful pictures!!! I never4 realized how tall Mr. G. is!

Fantastic photographic relation. I am greeting

I love your dress in the second picture You look so young, a spring rose. lol
I am glad you are some good weather
So are we and this year I am taking advantage of it. Its been a while.
lol

I love the flower carpet picture...this is a fun post, I am glad you had good weather.

I love the flower carpet picture...this is a fun post, I am glad you had good weather.

A good reason to clean up. I'm like that too. have fun with your blogger friends in that nice weather, Yum I love Italian food.

The flower carpet is fabulous.

Well, Belgian beers do taste good!
And that flower carpet is gorgeous. I hope they will be able to keep it looking like that with the heat coming this weekend!

Your friends' visit sounds like it was a great success.
Now you've made me (again) want to visit Belguim and try all those beers!

That flower carpet is beautiful. I just love all your pictures. Really neat that you got to spend time with a blogging friend. Have a great week ahead!

I love the little tour of your country, sounds like you are a wonderful tour guide!

The african carpet was a beauty! Nice we could take some pics from the second floor!!! We did so much and had so much fun! The beer at the theater toone was one of my prefered! Perhaps cause the special glass!