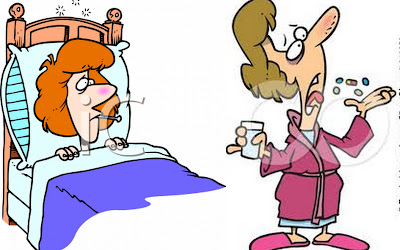 1. There is no much to report this week because I stayed home and took care of a cold which I carried from bed to computer and from computer to bed. I continued to read a crime story I had started during my holidays with Claudie. The story started with 4 guys who celebrated the stagnight of the fifth called David. They had the nice idea to burry him in a coffin, leave him there for 2 h and then let him out.

2. Answered emails, prepared my posts, swallowed pills, felt lousy, slept for 2 hours and continued to read my book. The four guys had a car accident and were all dead. David after having slept because of all that beer woke up in his coffin.

3. Same as above, except that in my book now the police looks for David, who is still burried but alive in his coffin. He is thirsty and therefore drinks the bottle of Whisky his friends had left with him. He tried to get contact with the walkie talkie they had left him too. No answer.

4. Same as above plus a little TV in the afternoon, David is still in his coffin could contact a guy who is mentally handicapped and takes himself for a FBI agent.

5. Feel a little better, dressed in a jogging, worked on the computer, watched TV continued reading my book. The grave is finally found but the coffin empty ! Where is David ? He should have been at his wedding the day before. I suspect his bride. She behaves strange .../...to be continued (without cold)
Posted by Gattina at 06:00

Oh no, my nerves are shot wondering whether David will be found. Anyone's worst nightmare, being buried alive. I'm sorry to hear you've had a cold and hope you feel better already today. Thanks for always visiting my blog even though I have had Internet hassles for weeks and cannot always comment on yours. Have a HEALTHY and happy weekend. Hugs Jo

Oh No! Forget your cold, you will get better, I need to know what happened to David in his coffin. Don't keep us in suspense. Will his bride wait at the church? Will someone find him in time?? Hurry and finish the book!!

Sorry to hear about your cold. Hope you get better soon and get to enjoy the weekend.

Oh girl...sorry for this awful cold.My daughter was in this same way last week, the problem was that she had lots of exams at school and she couldn't have a break!They say a cold is not a reason to stay at home, but we know the better thing to do is to rest. I hope you are feeling better today!
And about DAVID???I have a feeling his fiancé is behind it all!
Poor guy, what a terrible story!
***Please...I didn't understood the name of this book, I imagine I've missed some part of this story!??
Take care okay!
hugs
Léia

Take care, gattina!
Nice to learn about the book you began in Ollioules!!! But where is david now!!!? Hope you will learn it to me very soon!

Good heavens -- now we are all waiting with bated breath for the end of the story Gattina! Glad you're getting better.

You jog too? Oh my goodness...an active lady you are. I tell you, Bud and I decided to get rid of our cable TV service, and I couldn't be more happier!! No TV is wonderful.

Well! Something got you to stay put curled up with a good book.:) Too bad it had to be a cold.
I really dislike colds. Every time I think I'm getting one, I cringe and scare it away. lol
I keep my fingers crossed every day that it continues this way.

Drink lots of lemon tea and keep warm so we can see more of your cat pictures soon.

Sounds like quite the story you are reading. Would keep me awake!

I had a feeling the coffin idea wasn't going to turn out well...