The first time in my life when I went to a cinema was in 1953 when I was 10 years old ! What an exciting event for a little girl ! My father's mother, the grandma I didn't know very well was on visit and took me to see the film of Queen Elizabeth II's coronation in 1953. Although she was already Queen since February 6, 1952 when she acceded her father King George, the coronation took place only one year later on June 2, 1953.

The film was already in color and I was so impressed ! From that day on I wanted to be a princess if not a queen ! I remember I played coronation with my friends with selfmade "golden"crowns, old curtains and other "royal" outfits.

I never lost my interest in Royals and royal families, in their history, stories, or scandals, weddings, birth and funerals. I mostly update myself on Royals when I have to wait somewhere, like the hairdresser, in the doctors waiting rooms or at the dentist and of course the TV series "Place Royale" (Royal Places).

From all European countries there are only these once who still have a "working" King, Queen, prince or Duke. 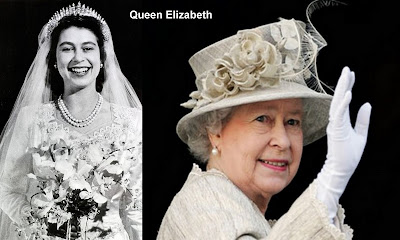 as a bride and today. She has a lot of phantasy for her hat creations ! 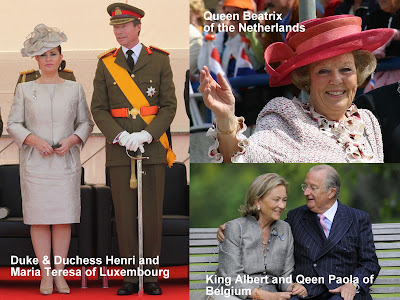 Queen Beatrix of the Netherlands also has a penchant for "funny" hats. 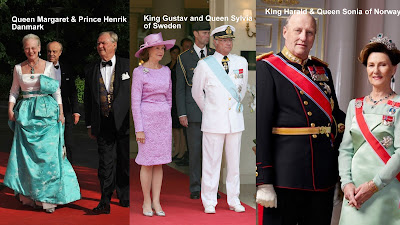 I knew all these still active Royals from when I was a young girl, when they were freshly married or just had acceded their father or mother. 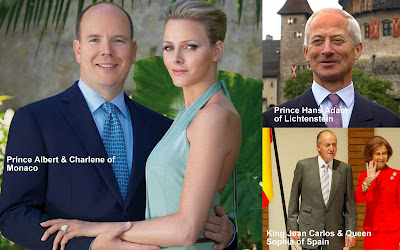 except Prince Albert who is Princess Grace of Monaco's son and I knew him as a boy and the Duke of Luxembourg was 12 years old when I knew him. But of course I knew their parents.

Some people think that Royals are useless and cost money. But they have success and this romantic touch. Representing a country always costs money, the president also needs body guards and new tuxedos or suits and their wives too. But they don't attract any tourists ! I think a Royal wedding brings also quiet a lot of money to the country and lots of people get a job. When you think of all the merchandising, the tourists who spent money, the Hotels, fully booked, the restaurants full and even the transport companies make money.

Now since 53 years I am living in a country with a King and a Queen, with Princes and Princesses and although they are less interesting to the press as the British Royals, I still prefer them to a President. For politics we have our Prime Minister.
Posted by Gattina at 06:00

I would hate to live in a Republic,Presidents and Prime Ministers are so boring. All they want to do is stay in power.
I want colour and parades and waving and cheering crowds and Gold coaches. Gold and jewel encrusted crowns and diamonds and pearl broochs and necklaces. Phew, I'm getting carried away here but I love the British Royal Family. (As you might have guessed)

I'm not totally interested in the royals, but I'm glad they're around. It's kinda fun.

I am very proud of our Queen. She is a great example of how to live every day to the full!

Royal watching is still important in Canada and the hats are always fun to see.

I admire the Royal Families and I think it is not an easy job to work at representing your country in the way they do.

Well, we are just as fascinated here in the US with the British Royals!

The young Prince certainly keeps the old folks on their toes these days.. I am in awe of his great works.. I am visiting through Alphabe Thursday and would welcome a visit in return.. have a wonderful day!
Patsy

I do have to agree with you here, as a Swede I'm very pleased with our Royals, they are very human with awesome opinions, representing Sweden very well.

It must be a tough life - to never have any complete privacy! And they can't say: no, I don't feel like doing this visit today... I'd never exchange place with them for any amount of money in the world....

We have something in common because I am a sucker for European royalty too. And I agree, Presidents are so boring.

Seems as though you're in good company with Royal watchers around the world.

I'm not much of a royal watcher and definitely not a fan of our American politics but I did love your post and do love the grandeur and style of the royals. Awwwwww, to truly be a queen.

There is something wonderful about the Royals. I love to see their weddings.

I wish to see a King, Queen, Princess or Prince if I travel to Europe one day. I think it is not easy as I have European friends who have never met their King nor Queen in their lifetime.

My country has only the President and PM, no royalty to watch. :(

An interesting article. I agree with the romance of it but I believe the Prime Minister and his government should run a country. Like you said. What do you think of Princess Mary of Denmark? We call her our princess.

Didn't we all want to be princesses? Even over here on this side of the pond, where there aren't any real ones! It's just a girl thing ;>) And I think it's the same for little girls nowdays, but, like us, they will grow out of it.

Queen Elizabeth and her Mom were always our favorites. My Grandmother loved them and this young Queen truly is a great role model and Queen. They grow a huge garden they give to feed the poor.
Unfortunately as much as I like the Queen I dislike Charles and Camilla.
After his Mothers reign, these two would make the crown a joke. They should do the right thing like what the king his Mother replaced did with Mrs Simpson and let his son and daughterinlaw rule.I still believe Charles killed his wife if not intentionally then unintentionally by keeping his consort Camilla.Even Royals can't have their cake and eat it too.

Thanks! I never knew much about the royals!

I am a royal watcher even though I am an American. I am just fascinated by the cultures and traditions. nice post Gattina!~Ames

I wouldn't describe myself as a staunch royalist, but I do have a lot of time and respect for our Queen Elizabeth II. She says some wise things and has done a lot of good for our country.

It would be Really cool to be Royalty for one day...

But only one day because they have so many Responsibilities to live up to...

Too much pressure for me to handle...

Very informative, Thanks for linking.