My neighbor Vivi "inherited" after nearly 16 years her daughter, a granddaughter, a dog and a 16 year old cat named Wodka. The daughter's partner had left her and she had nowhere to go but home to mom for a while. For the granddaugther and the dog there was no problem, but the cat, what to do with him ? Vivi had already a cat and a special one who would never tolerate another cat in the house. Besides that her other daugher is allergic to cats.

And then they found the ideal solution ! Vivi's boyfriend 92 year old Jack who is also my neighbor, (I wrote about the couple In Love at 70 here) always complained that he felt lonely so the idea to adopt a 75 in human years old cat and give him a new home, he found simply great ! He prepared an own room for Wodka, bought the best cat food, basket, litterbox etc he could find, called the vet for a general check up and kept him inside for 2 weeks until he got used to the house. Wodka, who had to lived outside the last few months and wasn't fed correctly by the bad partner in question, was suddenly feeling in heaven. Now they watch TV together, Wodka sleeps on Jack's bed and they "talk" together from morning til evening. Vivi joked that she is jalous now.

Only some neighbors are wondering why sometimes Jack suddenly stands in the middle of the night in his pajama in the garden and shouts for Wodka ! They certainly worry now about his state of mind. Nobody of course couldn't know that it was only the cat's name. 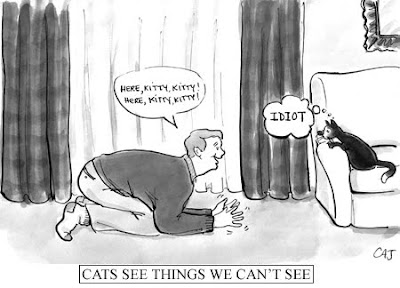 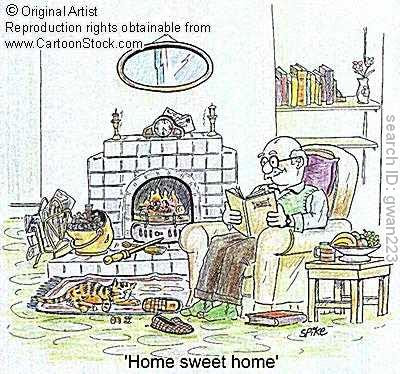 What a great story! Lucky Wodka.
I think the BAD partner leaving was best for everyone.

That's a very interesting story indeed and I love the "cats see things we can't see" cartoon.
God bless you!
Cezar
P.S.: Wodka is quite an original name for a cat!

Thats is such a nice story. (3 years old and caring for a cat, that's wonderful. I had a giggle at him in the garden at night calling for Vodka.

What a great story! I love such "love" stories.
Thanks for your comment on the kibbutzim. I know that Germany is great in acknowledging that Hitler's regime had done great harm in our world. How wonderful that these young Germans wanted to help Israel to get their own land.

This was a great solution. I gave my grandmother my little dog and they became the best of friends When she died the dog went to her friends brother who was a dog lover . His died and he never replaced him because he was so heart broken. Lady came into his life and he was over joyed. Animals have a a lot to give to people .

The desperate houses story is excellent!!! So funny and cute!

I am picturing your lovely neighbor calling for "Vodka" in the middle of the night. (What a cute story.)