A REAL OR FAKE CHRISTMAS TREE ?

Talking with my son yesterday about Christmas trees, he told me that they wanted to rent one this year. I had never heard about renting a Christmas tree, but finally found it not a bad idea. You keep it the time you want and then when Christmas is over it will be taken back and be planted again. This really intrigued me and I found out that it is also done in the UK. (rent a Christmas tree) Maybe in other countries too. Then I also found that you can adopt a Christmas tree, so you are sure to get each year the same tree. (Or at least you should)

With the renting system you get each year another tree. Which is maybe better then always the same. I also think it is not very practical if you want to have a big tree, because it has to be in a pot and I suppose and that must be quiet heavy.

It's also bad for the Christmas tree plantations, for them if nobody buys a tree anymore they can close their business. Christmas trees are not anymore choosen in the woods as it was before, because then there wouldn't be enough left and if you steal one you get a fine of course.

Children, animal and nature friendly are the artificial Christmas trees. Nowadays they are so well imitated that you can hardly see the difference. They also became very expensive in the last years. But it's only a one time investment, you can use it for years. My friend Chantal since 20 years has the same fake Christmas tree, because she had two little boys and a cat and soon the grown up boys will also have kids and she has now two dogs and a cat.

A fake tree also has the advantage to never loose the needles and it is not dangerous if ever it falls. No harm done with needles.

We always used to have a real Christmas tree, just because fake once didn't exist. But when our son was grown up and we had 3 and then 5 cats, I bought a middle sized fake tree which is very nice and we use it since at least 8 years. Nicely decorated you don't see the difference. 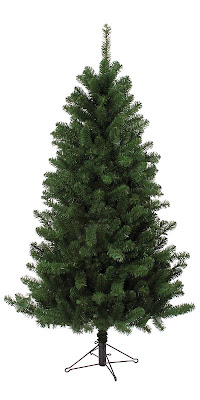 This one is a fake Christmas tree quit big, 1.85 m (73 inches) for the price of 79 € (106 $)
The real once also become very expensive each year. Therefore more and more people I know prefer to buy a nice fake one which they can use for years.

Some people miss the fir smell but for that too, a solution has been found, there are sprays with fir odor ! Not so sure if this is necessary because everybody is rather concentrated on the good smell coming out from the kitchen !
Posted by Gattina at 06:00

I love that idea. And I haven't heard that here in USA. It is better to rent or adopt why not. In that matter the tree is there forever and they don't have to plant every year. I like the live plants it smells good ^_^

I love this idea as well but another idea is to get a big planter on wheels and plant your tree in it and watch it grow. You can bring it in for a week and then take it back out and it continues to grow.
You don't have to rent it and its special because it celebrates every year with you. When it gets too big you either plant it outside or sell it.:)

Rent a Christmas tree! I have never heard of that before. I know real trees are nice but I prefer a fake one. Less mess and bother. I have one that has filament lights changing colour. It is very small but nice enough for us.

It's always a fake one for us, due to my allergy to Pine Trees. I love our fake tree. It really is full and lovely. I bought it many years ago, on sale for $50.00!

If we are at home for Christmas we always have a real tree and I think this sounds like a great idea.

There is a FABULOUS program here in San Diego, CA: www.AdoptAChristmasTree.com. They actually deliver your tree with singing, dancing elves and then pick it up after the holiday and then they have it re-planred in here San Diego (or you can keep it and plant it in your own yard, which we do). We've been participating for four years now. I believe there is another program in Los Angeles called the Living Christmas Co.

I hope this movement really catches on! I've always disliked fake trees and felt guilty about cut ones.

I thought I would let you know that TN ChICK over at photo hunt about some one taking over the hunt.
http://tnchicks.wordpress.com/2011/12/03/new-host/
I believe you might be interested.

Omw, I think Grant would have a fit if I adopt a Christmas Tree! We already have adopted animals in South Africa and overseas: A Cape Eagle Owl at a Raptor Rehab centre, a couple of cats and dogs in an animal rescue organization in Cape Town, a cat and a dog and a litter of rabbits in the SPCA in Durban - not counting our own four cats and three dogs in South Africa as well as our three cats here in our house in Kenya. I also have adopted my houselady's dog and two cats by storing leftovers for them, giving her Advantage for ticks and fleas and de-worming tablets. That's also EXcluding the two dogs which I treat for ticks and fleas and worms at the local club down the road. I'd better not ask to adopt a Christmas Tree, lol! I love the way you have all the explanations to traditions, Gattina. lovely post. Hugs, Jo

I'm from an area where trees grows. At one time there where plenty of tree farms that just grew Christmas trees. Well the market went under because of artificial trees and the general economy.

I have to say I never heard of rent a Christmas tree. I told my husband about renting a tree. He works in tree nursery or farms. He said “Climate of the area would have a lot to do with it”
But I can understand how it would benefit the environment.
But in general the United States haven't yet jump on board about carbon. That's the last I heard.

We have some land with trees on it. So we go out and cut our own Christmas tree. But every year I keep eye those fake trees.
I notice there is a price variance in the fake tree. One can get a fake tree for $30 (22 EU) but it looks fake. But the price does go up and if one wants to get a nice looking fake tree ones would have to spend upward of a $100 (75 EU)
But usual after Christmas every thing is market down including fake trees.

We've always had fake trees. Fir trees do not grow readily in our weather. I agree that it is an investment that lasts many years.

We have a fake one, the real ones cost too much and we don't have a place to root it for a whole year!

A rented tree sounds like a great idea! Thanks for introducing me to it.