TO RAIN OR NOT TO RAIN THAT'S NOT A QUESTION

In the past I have been told that the UK is a country where it always rains. This is not the truth because I am the witness that in Belgium it rains more. In fact it rains at least 2 weeks per months and for the moment I even got the impression that since I am back from holidays in the UK (where it didn't rain) it rained all the time here at home. People who weren't able to go on holidays and take some sunshine have a complexion like a white cheese. In the 19th century it was very posh to be so white and women walked around with umbrellas because they didn't want to get brown.

Now everybody wants to have a healthy look which means a little brown at least.

- It rains cats and dogs - to rain very hard
It has been raining cats and dogs all morning, which is true, I looked at my feet I think they start to change into flippers

- A rain check - a free ticket to an event that replaces a ticket that has been cancelled because of rain or for some other reason
I received a rain check to change a bathing suit into a rain coat.

- Rain on (someone's) parade - to spoil someone's plans
I tried not to let my bad mood rain on my friends parade during her birthday because it rained.

- No matter whether it rains or the sun shines
We plan to go to the beach tomorrow rain or shine. (only in my dreams)

- Rain (something) out or rain out (something) - to spoil something by raining
Each outside activity is rained out !

In short I will give up my cat collection and collect umbrellas in the future ! 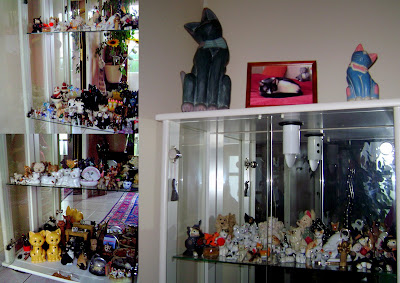 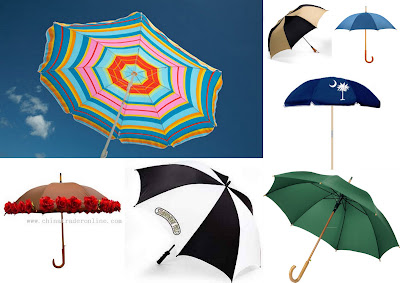 So true,rain here and there too. We were i n England and didn't have rain, since then it rains.

I love those graphics! When you live in a rainy place you just have to love it. Providing I'm dressed for it, I'm happy to be in it!

That is why your garden is green. It must be annoying for you but you manage a funny post about it.

Yikes, sounds like you have had a lot of rain there. We have had unusually dry weather BUT when it comes rain, it's like the sky is opening and letting it all out at once! Very strange....

I hope you get wonderful weather when your wonderful guests arrives :-)))

We've had quite a bit of rain...but not until we had quite a number of rain-free weeks. ...so the recent rain has been great.

haha The last cartoon image was cute! Hope you get some sweet, sunny days to enjoy!

Blessings & Aloha!
Thank you for stopping by! Yes, time certainly flies by fast!!

We have been getting much needed rain here on the east coast of Central Florida. But we are still in a drought whichs means brush fires. I welcome the rain.~Ames

Here in the desert, it is the monsoon season, and we STILL don't get enough rain!

It's been raining a lot here recently.

well i don't know.. I think it also rains a lot here in Germany.. so I don't know who gets the most rain? hmmm

We rarely get rain living in a desert. I always think I miss it, but then when I go to the Pacific Northwest or something, I realize the sunshine is a lot better for my spirit!

Thanks for a fun link this week.