The big one Mr.G. has gotten when he was two years old sits in the attic since a few years because we always celebrate Christmas in our son's home.

But we have a small one, a cute little substitute with everything Mr. G. needs to be happy. When I had put up the whole crèche with the cow, the donkey, some sheeps and some cute little angels, and had put Mary together with baby Jesus in his crip I noticed with horror that Joseph was missing !

Now a Mary without Joseph sitting alone in front of her baby was a religious afront and a scandal ! I unwrapped the 3 kings in the hope to find Joseph with them, but unfortunately he wasn't with them either. I looked through all boxes and bags no Joseph. It was terrible ! How could I explain to Mr. G that Joseph apparently has escaped and is now a fugitive. There are already some doubts about Mary's virginity and now my crèche has a fatherless mother !

Finally I called Mr. G. for help ! I told him that Joseph is missing and that Mary is sitting alone in the stable. First he was really upset, a crèche without Joseph impossible, but then he had a closer look and picked up one of the three kings. Here, he said is your Joseph ! I looked at the little figure saw no difference between a king and a Joseph (I am not a crèche expert) took Joseph and put him with wife and child and everything went back to a harmonious normal. Except that now a king is missing ! But that is not so important right now we have until January 6 to find him, when they arrive at the stable to offer their presents. 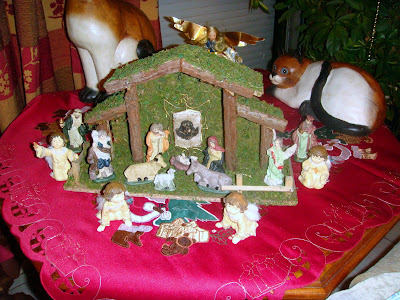 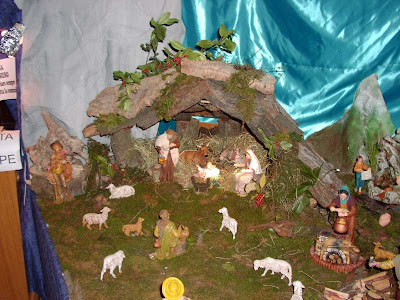 The very big one we have is a whole village with houses, farmers, camels etc. a little like this one, I couldn't find a more similar one on Internet.
Posted by Gattina at 06:00

I hope you find your king! Do you move your kings daily in your house, so that they "travel" a bit closer to Bethlehem each day, finally arriving on Christmas morn?

I love the idea of a nativity with a whole village scene. I've never seen that before. How brilliant. I do hope you find your king before Epiphany.

Thank goodness Joseph was found - or it would be the world turned upside down;-)

I hope you'll find your missing king!Best wishes for a happy Christmas.

Brilliant nativity, Gattina, even after the panic of the missing Joseph (and now the missing king!) Our hardware store owner's mother brought him a village nativity from Italy many years ago and he displays it in his shop window every year. People decorate their houses and gardens with Christmas lights and nativity scenes as part of a town competition. My bachelor neighbour does a HUGE one. I hope to capture it on film and post about it soon. Have a great weekend, my friend. (((hugs))) Jo

I love nativity scenes, and I hope you find your Joseph/king.

Maybe Joseph went to make sure the star is bright and the donkeys and camels have enough water. Don't fret, he will return.

I always knew that Joseph would run out on Mary one day!!! LOL!
Perhaps I should get our creche out this year. I haven't had it out in a while because of the dackels. Hmmmmmm.

That's awesome . Did you know the 3 Kings visited the Holy Family about 8 months after Jesus was born? Yes I guess the slaughtering of the firstborn was after that too . Poor Joseph , I'm glad he was found . What happened to the other King ?

Oh Gattine, you are hilarious. I suppose the king went off to buy a gift. LOL

OMG...I always thought Mary was a tramp but I guess I'm going to have to keep that in my imagination LOL Now before anyone goes and gets all "How can he say this about a Nativity scene?" Well my answer is "Tis the season to be jolly and spread humor however, dark or dumb it may be." Oh well it's just me. Maybe Joseph was also had a wondering eye for let's say Eve? hmmm

Jesus and a shepherd are missing in our, but I have removed them unpurpose. Jesus will arrive Christmas day and the shepherd in going on the journey. Hope the "real" Joseph shows up.

Tell people that the king lost his GPS!!

That was a nice story.
I hope you find the missing wise man.
Lol

There seems to be a missing creche participant theme going on in blogland (Grin) I do hope you find the missing king soon. He might still be waiting in line from Black Friday's shopping...gold, frankincense or myrrh?

May be he went outside to scoop of the snow so when you go out, you wopn't freeze.

Oh no! No Joseph!! I hope he turns up or that you find a suitable replacement!

So glad you have your Joseph and there isn't a new scandal! Hopefully, your king only had a slow camel and will show up on time!

No doubt the third king is having a snack somewhere, but shall be there on time. :-) Every year in my town, someone (or someones) put up a display of nativity scenes from different countries. My favorite display is from a South American county (can't remember which one). The figures are made corn husk.
Merry Christmas!
Su-sieee! Mac
J is for Joy of Christmas

I do hope you find your missing King ...

That very big one sounds so intriguing! Good luck with the lost king!

My imagination longs to take this post and make a short story out of it.

I've not seen a nativity with a village scene like that before. It is really charming.

And so was this little stop on our journey through Alphabe-Thursday's letter "J".