Helps you to remember what you have done on the weekend of November 6. You never know if you need an alibi ! If you participate please put the little logo on the top of your post and leave your link.

I had to buy a new outside lamp which I put in front of the door, because it's getting dark now very soon and I thought it could be dangerous for visitors because the steps were difficult to see. When I had done that, and being outside anyway, I looked at the tiles of our terrace and found them green instead of white, moss had invaded my tiles and had declared war ! Fortunately there is a nice long lasting (cheap) remedy, just a jerrican of chlorid ! That's so efficient that even my black trousers became white spots and I had to throw them away ! 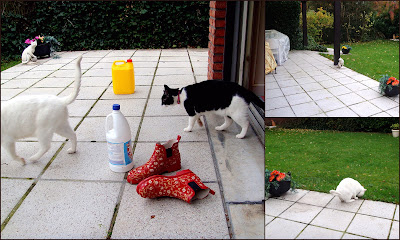 Of course the cats had to check and Arthur behaved like a druggie with the chlorid smell, he couldn't sniff enough !

After that I didn't want to move anymore, so comments writing came on purpose until it was time for supper. 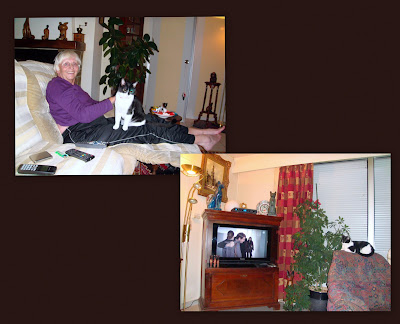 Watching a crime story on TV together with Rosie ended this day. 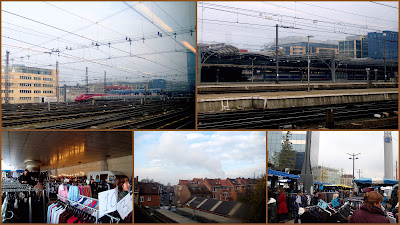 Sunday morning it was cold but the sun showed its nose so I took the train to "my" midi market in Brussels. Through the train window, which was surprisingly clean for once, I saw the red Thalys (above left) which takes you from Brussels to Paris in 1.22 h instead of 4 h, and the blue Eurostar (left) which goes to London also in less than 2 h. Before you had to take a ferry boat to go to the UK. I stayed in Brussels and made my Sunday walk through the market. As always it's very cosmopolitan and you hear all sorts of languages ! From Indian over Arabic to Polish etc.

When I arrived home it started to rain so the rest of the day I spent on my computer, and TV. A very quiet and rather boring weekend !

Aaaarrg, Gattina Stop. You are making me envious again. 1.22h to Paris and 2h to London. If only my 2 cats would agree to live in Europe, but we would miss the sun I think. I drove to my son's place for Sunday lunch and it took 1.22h. Hope Rosie enjoyed the crime story and Arthur has come down from his chlorid high.

Oh ,Those tiles look really White now, good job.Love how you ended the day, Crime stories are such great Mysteries.
Those fast trains are so neat. Paris,sounds like a great next adventure. London..always wanted to go there. Glad you had sun for your Brussels market trip.

Yep, your tiles look lovely and clean - is Arthur floating about somewhere (lol!) I love the way Rosie watches telly I had a cat once that loved telly and then we got rid of it (the telly, not the cat!) The market sounds super - a real windown from your lovely Africa holiday. When does your grandbaby arrive? Have a good day, Gattina. (((Hugs))) Jo

You looked so relaxed with your kids. :)

Thanks for the info on the trains, I'm thinking of touring Europe.

It would be faster and more convenient to travel by trains through Europe.

I skipped this weekend. Today would have been Katie's birthday, so I made a small montage to remember her with.

I would like to say I did something productive but that would not be true. Other than getting the cows back in that got out I did nothing but relax with the kids.

Hm, I went to the hair salon on Saturday and in the evening I went out with my husband and son for a pizza. Yesterday I spent at my parent's house. Not a very exciting weekend either.

i like quiet and boring weekends. they are my favorite.

I always thought that Arthur had addictive tendencies. (Takes one to know one!)