HOW I LEARNED HAGGLING

H is for "haggling"

If you go shopping in Egypt you have to haggle ! For everything even in drugstores, where I saw a young father haggling for a price for nappies for his baby ! He got them for almost half of the requested price. Haggling is worthwhile !

Lots of people don't like to haggle because they are not used to it. I have learned it quiet early, in fact when I went with Mr G. for the first time to Italy. In 1968 everybody haggled it was just part of the folklore ! In the shops and on the markets you had to haggle to get a reasonable price. There were no lables at all !

The first time I went with him to the Garda Lake, he had haggled for the price for our hotel room and as the wife of the owner was one of his ex girlfriends, he got a good price.We also we were allowed to share one room, which at that time wasn't allowed in Italy without a marriage certificate ! Being unmarried and sharing a double room was a big sin. A very profitable law for Hotel owners, who could therefore rent two rooms !

He also bought me jewelry, for that he had another ex girlfriend who had a jewelry shop. They both haggled for the price of a ring and I was standing there with eyes like saucers but I got my ring for very cheap.

Slowly slowly I started too ! I never agreed to a price. At that time we bought quiet a lot of decoration stuff for our new appartment and I always was very proud when after a long haggling I only payed half of the requested price.

So the fact that I had to haggle again in Egypt brought back nice souvenirs and of course I tried and checked if I was still good at it ! and in all modesty I am ! Egyptians have a lot of humor and haggling is a sport. Actually they are quiet disappointed if you pay the full price right away. (Not with the Russian speaking people, they get the double price because they are so unfriendly to the locals !)

Now when I want to buy something I go under half of the price and then slowly go up with lots of discussions and laughter til we meet in the middle and both of us are happy. I then add : "What you lost with me you can add on the price of the next Russian woman" ! I am weird !

Once I wanted to buy a bracelet. It costed let's say 10 €. I said that's far too much I only can pay 4 ! He answered I would ruin him and his family, took out a hanky and dried some invisible tears. I said : and I will get in trouble with my husband, took out a tissue and rubbed my eyes. With sobbing and discussing and meanwhile surrounded by tourists and lots of locals we finally came to an agreement ! I would get my bracelet for 5 € ! That was OK for me.

Immediately he stopped crying, put his hanky in his pocket and started to laugh ! He said "you are such a good business woman, here take the bracelet it's a gift from me "! First I didn't want to accept but I had to, he insisted so much, so I gave him my little calculator on which he had layed an eye since the beginning ! (business is business !)

And then we all had a cup of tea together ! Egyptians are called the Italians of North Africa, always ready for fun and joke ! 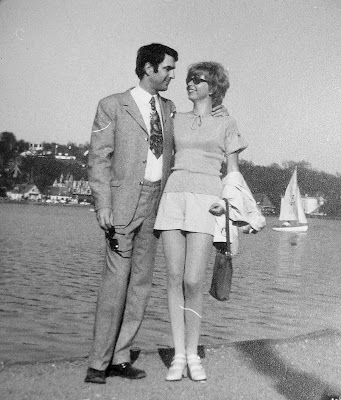 Hello Gattina! I am visiting you from alphabet thursday and I am now following your lovely blog! As the child of a greek father born and raised in china, I have been well versed in the art of haggling and I really wish here in America that haggling was the norm. I think shop keepers would be much nicer! All the best! Alex@amoderatelife

Bravo Gattina!!! You are an excellent commercial!!! We are used here to haggle when we go to the flea market or when we buy something to blackpeople who sell on the markets and beach: glasses, african clothes ets... I know haggling is a pleasure for them.
It's a free day, today!!! i will continue my bags and we are waiting for Mélissa this afternoon!!!

Hi Gattina! I hate that; friends say that I'm good at it when I engage in business, but I truly don't like... But you are great... and started early... ;)

Blogtrotter Two has moved to a new country and actually to the most populated city in Africa. Enjoy and have a great weekend!

Great post. Having visited Egypt many times, I wish I had this skill. It is still so hard for me to do.
Tracy

I used to feel bad about haggling, and then I decided to look at it like a game. Now I have gotten quite good at it!
BTW: Love the picture of you and Mr. Gattino!

Hi Gattina, it is such great fun to visit you. I love love love haggling, I do it at our flea markets. I got a vintage typewriter this past weekend for a great price, because we haggled nicely. Great H

I had to haggle in Morocco and didn't do it well. I think you did very well.

What a sweet photo from 1968!
I learned to haggle in the market in Jerusalem. I'll have to post about it some time - it wasn't a great first experience!

I don't like to haggle. My husband loves to.

(And I sorta love when he haggles, because it saves us money. And because I don't have to.)

I am one of those who cannot haggle. I want the best price at the first moment. If I discover the seller might go lower I figure he was willing the cheat me and I am inclined to not buy is thing at any price and walk away.

I am one of those who cannot haggle. I want the best price at the first moment. If I discover the seller might go lower I figure he was willing the cheat me and I am inclined to not buy is thing at any price and walk away.

Lots of haggling going on in Asia, Gattina... and the best line comes from the Thai: good for you, good for me. The only words in English they know other than hello. I used them all the time. Haggling is a good H word.

Gattina, I read your post with so much delight. Even having visited 85 countries and 20 Caribbean islands in my 66 years ( many of them on my 88 cruises ), I am not the best haggler. With my job loss
( forensic nurse for San Francisco for 21 years ) almost 2 years ago, and subsequent retirement at only a half pension, I'm pretty much grounded so, if I get to travel at all, I'll learn to haggle more aggressively!

What a wonderful photo. You are so funny. I did not know Belgians could haggle.. I am really not very good at it unfortunately.

This is a very fun and interesting H post. I love it.
Visiting from Alpha-Thursday.
xoRobyn

LOL! A bracelet for a calculator! What a FUN story! I think I would be good at haggling! Of course I don't know... NOBODY haggles in America... only for car prices!

LOL! Your haggle over the bracelet was so funny. The mama of mine loves to haggle. She's good at it, too. I'm still shy about haggling. But the few times I've had, I enjoyed it.

I find haggling fascinating. Thanks for sharing these stories.

I don't haggle because I don't care much for shopping.

I've never really had much practice at haggling so I have no idea whether I would be any good at it or not. I enjoyed reading your experiences though :)

I love this post! You are gorgeous in that picture, too!

This year when things got much tighter financially I told my husband I was not going to pay full price of any services or major items without asking for a price break.

I've done it all year and about 99 percent of the time I've either gotten a discount or some additional product or service for the original price.

I love the stories here. They enchant me and transport me to a different place. But I am always pleasantly surprised to see the world is really the same everywhere!

Thank you for linking.