As Fun Monday had no success anymore and had only very few participants, I meditated to find a new meme for Mondays. After a while of pondering I thought it would be interesting to write on Mondays what we have done during the weekends.

This could be very useful in case you are involved in a crime and the police asks you "What have you done this weekend ?" of course only in case the murder was commited on a Saturday or Sunday, you will always know what you have done. It can also be interesting for your offsprings to know what their grandma or pa have done 20 years ago on the weekend of August 21, 2010.

The inspiration came from Mariposa's Fun Monday question "Where were you and what were you doing exactly 5 years ago?" Of course I have no clue ! But if this meme would have existed 5 years ago I just could put a link to a post which I had (not) written in August 21, 2005 !

So if you are interested in this meme, just leave your link and come back next monday with a post telling us your weekend adventures.

And here are mine :

On Saturday summer showed up again, it was very warm and sunny. But instead of laying lazily in my garden, I had to do shopping as I was away for a week and Mr. G. had emptied the fridge. That's what I did and came back half melted because of the heat.

Meanwhile I also had done the laundry, or rather the machine, the only thing I did was to push the button. But unfortunately you have to take the laundry out and hang it out to dry or put it in the dryer. And still it is not finished because it needs to be folded and put back into the wardrobes. These machines are so lazy ! People walk on the moon and a washing machine can not even put the laundry dry and folded in a wardrobe !

Sunday I did a little walk across the Waterloo market with the intention to only buy some eggs and fresh made pasta. The result was that I came back with a nice summer dress and a short sleeved sweater.

In the afternoon my friend Ilona had invited me for a tea and chat but first we went to a summer fair in her district just to have a look at the stalls and the festivities. Of course I couldn't resist to buy a beautiful necklace out of real turquoises and corals which some Peruvians sold on the street and she bought two vases. Ilona is a specialist in semi precious stones so I was sure they weren't imitations. The rest of the afternoon we were laying in her garden and chatted. When I came home Mr. G. was wondering that we still have things to discuss !

In between I was blogging on the terrace and watched my cats playing. 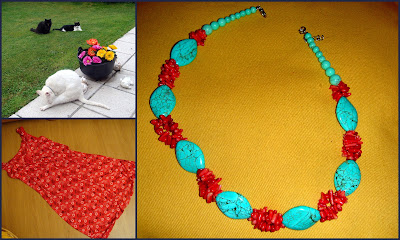 Labels: new meme, What did you do this weekend ? turquois necklace

This weekend I've commited the crime of sloth--if I ever have to be questioned by the police. Read an entire book, watched too many films on Netflix and, like you, did the laundry. Oh, and I know what I did 5 years ago because I keep old calendars!

Did you enjoy your time with English friends?

Unfortunately we spent the weekend at the hospital with my mother-in-law, while we were supposed to spend it away on bike with some friends.....

I spent a lot of time n the computer. I also did housework. Sunday afternoon, I colored with crayons. It rained all day Sunday.

I wrote about my weekend already so I made a link. I hope I did this correctly. Let me know.

I had a very very busy weekend but have not had time to write a post yet... But this is probably the best Monday meme to participate - because that is mostly what people want to talk about anyway! LOL!

You and Ilona ALWAYS have such fun together - and NEVER run out of things to discuss! That is how it is with me and my friend Gail too! Only in the past few years we hardly EVER see each other because we are BOTH so busy with family and (most especially) grandchildren! Still, when we do get together it's like we've never been apart!

Just posted my fun monday. will try and write up the weekend. saw a girlfriend and have pics. yeah!

This is close to what I already do on Sunday's...I summarize all that has happened during the week.

Good idea tho. But I won't have time to do a repeat of the weekend when I do a week's summary already.

Hope you get some participants.

shopping -yay! i love those little weekend fairs which you think you will only look at and in the end - your bags are full! this is a nice meme.. maybe one day i could join as well ;)

Scoured my photo archives and discovered that I flew to Iceland 5 years ago on the 23rd August 2005. This weekend 2010? Tending to D's burns as recently he had an accident with an angle-grinder. Knitting for charity...now I'm making doll's clothes and have a set to knit for charity.And all the usual mundane everyday tasks...

Week ends are fun. We go shopping and do chores.and cooking three times a day as opposed to one.
lol