A long time ago, when I still lived with my parents, I was sitting in our garden reading a book. My father lay on a deckchair on the patio deeply sleeping with his mouth wide open and snoring like a chain saw. As usual he was dressed in a suit, white shirt and tie even in his free time. In his opinion a well educated man had to be well dressed. I don't know if the pigeon which flew over his head took the open mouth for an invitation to poo, went into action but missed the open mouth.

My father woke up thinking he had got a raindrop on his face, so with his hand he wanted to dry the drop but smeared the poo all over his face. He looked gorgeous ! I was laughing and laughing pretending that I laughed about something in my book, because my father had no humor at all when his person was involved.

My mother coming out of the door, saw my father's face and got hysterical as usual. She screamed and screamed and pointed her finger at his face as if he had gotten smallpox or some horrible skin desease. Finally my father realized that there was something wrong with his face. When he heard what it was he got so furious that I thought he will get a heart attack !

I felt a malicious pleasure, because he was always great in making fun of others ! Now it had been his turn ! 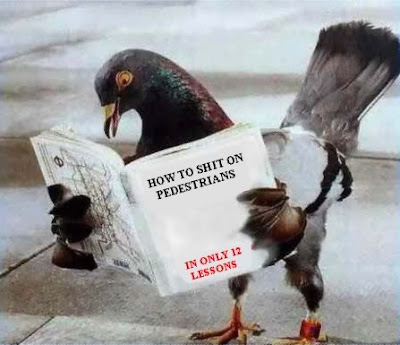 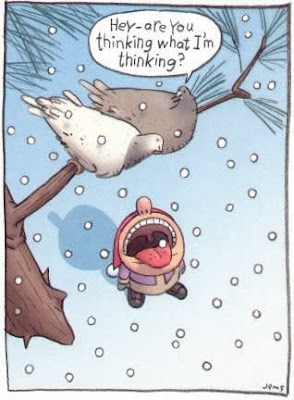 ROFLMAO!!! You are pure evil and I love it. I would get great pleasure in that as well :) This is one of the funniest stories I have heard in a long time LOL :) Love it :)

OMG...Gattina you are so funny...
I really got to think of the funny things that used to happened in my life but...we must be so boring...LOL
I love LOVE your post.
Having you in Weekend Funnies is such a blessing!
Thank you.
Happy Mother's Day, Gattina.
hugs
shakira

Too funny! Thanks for starting my day off with a laugh.

You and me....we're both so much alike. I love your story of the pooping pigeon. Which reminds me of a cartoon I once saw and there were birds up in a tree. One said to the other "Patience my a$$, I'm gonna poop on the next one that walks by". Or something like that.

LOL! Oh that is tooooo funny! I would have laughed hysterically too - but I never would have remembered it alllllllllll these years later! You are sO good at that! :)

I enjoy your sense of humor,
I have a Mother's Day Post today,
Hope that you enjoy!

You had my whole family laughing. What a hilarious story and cartoons.

Just catching up! This is hysterically funny!!!! Thank you for sharing!!!

Where I used to live we had a bagels shop that used to just throw the rotten ones out the back where enormous flocks of pigeons would come down for a peck-about... I think they particularly liked the smoked salmon ones ~ well I would if I were a pigeon. Plus they'd give you more fragrant diarrhoea for the target-practice...
Anyhow I'll never forget the day we spotted a pigeon flying around with a bagel right round its neck, like the proverbial millstone. It was amazing and barely seemed to notice its doughey adornment... I so wish I'd had a camera-phone..!