MRS. SMITH OR MRS. JONES ? Living under a false name

Last year in August I had applied for a new passport and after some administration difficulties, (all public institutions have to invent new once, to make it a little more complicated) I finally thought now it was settled and I could get my new passport. But not at all ! There was another complication, I had the wrong name ! I was travelling since 40 years under a false name. I felt like a spion, a modern Mata Hari, how interesting !

From my birth til I married Mr. G my name was Jones. The day of my wedding I became Mrs. Smith. With the marriage certificate I went to the German embassy in Brussels to change officially from single life to a married woman. I got a new passport with the name of Mrs. Smith. For Belgium however I still was Mrs. Jones, as, according to Belgian law women keep their maiden name for all public documents. I always had to pay attention that my flight tickets were on the name of Mrs Smith (like on my passport) and not Mrs. Jones like on my driver licence. With that I lived happily for 40 years until the German embassy realized that I had the wrong name on my passport.

They called me to inform me that 40 years ago an employee had made a mistake, because according to Italian law (and Mr. G is Italian) I should have kept my maiden name Mrs Jones and that's why they couldn't make a new passport. I told them friendly that I didn't give a sh..t about my name, and they can take what they like but I want a passport and not travelling with the temporary one they meanwhile had given. With that one I would never be able to go to the States because my passport picture which showed a not smiling (that's a must, to make a difference between you and smiling terrorists) Mrs. Smith (not Jones) with a brown face, yellow hairs and two dark spots which once had been my eyes. This happened in September and after that I never heard from them again.

Last week finally I called them and asked what happened to my passport and which name they finally had choosen. The passport responsible was very upset, she couldn't find my file and no passport either and wanted to call me back. I thought the world is getting crazy and waited for a phone call. And I got it 2 days ago ! My passport was ready, but filed under my maiden name Jones and as I had applied for a new passport with my married name Mrs. Smith, they also got confused.

End of the story : After exactly 40 years I got my maiden name back and made a cross on Mrs. Smith ! Apparently in Germany too, now the woman keeps her maiden name from birth on unless she does a special apply for her husbands name ! There is no need to send flowers for Mrs. Smith !

Above is the temporary one in green as Mrs. Smith and below the new one as Mrs. Jones !

Previous posts about my passport adventure

Getting a new German passport

Rebirth for a new birth certificate 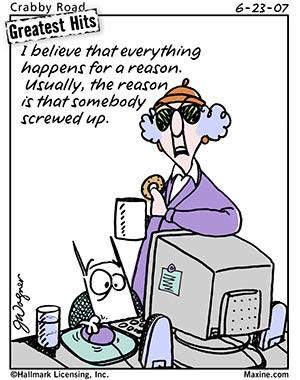 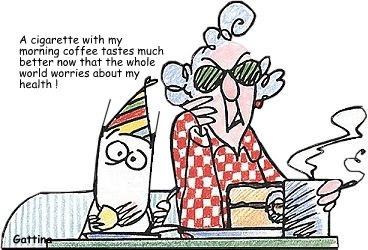 Please go to The Teach to find more "Maxine on Saturday"
Posted by Gattina at 06:00

Cool! You travelled the world with a false name on your passport for 40 years!? Are you a spy? hahaha....

Imagine that! What bullsh*t!
I have been Mrs Smith longer than I ever was Miss Jones! Wouldn't know who they were speaking about if they called me that name!

Are you sure you know who you are?

LOL! I do remember that story! I think they should just do away with passports and let us all travel at will back and forth... WHAT is their purpose but to keep track of us? Soon they will micro-chip us all and there will be no need! No need for names either - we will be a number!

Ha, Gattina! Really funny! I'll post yours and everyone else's next Saturday! :)

Oh how I agree with Maxine today. It is amazing how hard you have to watch everything to keep from having to spend time fixing things later.

Love you voice on todays challenge. I have not been able to think of a thing yet. But, I will.

That is so funny! All these different countries need to get together and decide on a single law for married women.

This makes me think about just how much fun (sarcastic!!) it was to go through getting all my documents changed over to my married name.

My goodness...so you have incompetant workers there also...I thought we just had them in the U.S.A!! What a mix up for 40 yrs...glad you finally got it straight!

Oh my goodness, how utterly confusing and distressing--it's like getting your driving license in NJ! I wish the US had a custom as you do, for the woman to keep her maiden name. Then I would not have had to undergo torturous paperwork and rigamorle several times already. And I love love love Maxine!

About looking back on our past, I have a feeling I will feel as you do but with regard to my mother. It is turning out that my father was not so bad. All my traumatic memories revolve around my mother and I would prefer not to remember them but unfortunately these hideous memories keep popping up now. :P

This is the little 40 year old error that just keeps on giving. It's been interesting reading about it and I'm glad it seems to be resolved.

What it does NOT give me is much faith in bureaucracy. I see it all the time too - but it less official environments.

I sure hope it doesn't keep you from traveling.