What happened this week in 13. points.


1. I had the honor to be visited by 3 Jehova witnesses, looking dull and grey

2. I didn't want their " Watchtower" magazine, I prefer magazines about royals

3. When I saw two small children I got angry and changed from a friendly housewife into a fury

4. I told them that it is a shame to take kids from door to door instead of letting them play in the sunshine. That this was certainly not what their Jehova wanted, smiled to the two kids and slammed the door !

5. Then I got a phone call from a guy who wanted to sell me 200 bottles of the best wine of the world. I told him that I am president of the AA (Anonymous Alcoholics)

6. We were watching a crime story at TV and in the middle of a murder when I saw a hand holding a sharp knife the electricity went off and we sat in the dark.

7. With lighters we looked for candles or a torch

8. Mr. G religiously lighted 10 little candles while I found a torch and went on the street

9. The whole street was dark and no lights to see. I knocked at my neighbours door because I thought she was alone. She had company ! Her 90 year old lover ... or now more a friend

10. We both were rather bored. What to do without TV ? We had exceeded age to think about founding a family

11. I answered emails on my baby computer which has a battery while Mr. G watched an action movie on a little DVD player also equipped with a battery

13. During the night Mr. G knocked over his bedside table, he had a nightmare. The cats weren't happy. 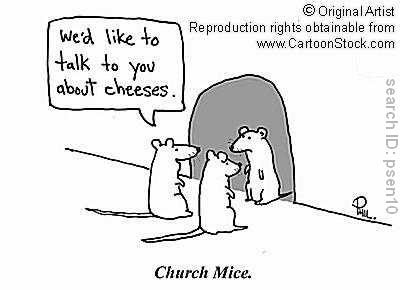 Thanks for the laugh. So funny especially the mouse joke.

Now they took the kids from door to door!!! I had a woman several years ago who helped me in the class and was a jehova. She was always tired for school but after school she began her walk from door to door!! I had a marvelous puzzle about halloween but she couldn't support fests because her believe and one day curiosly the puzzle disappear!!!
Mélissa takes the train to Paris today so I decide to go with her to Marseille and stay a little there. I will visit a museum not so long from the Cannebière about primitiv art. But I suppose Mélissa will take my camera! I'll buy some pictures and do an article with!

I'm with you on the Jehovah witnesses,etc..fun post sandy

I think it sucks when the electricity goes out when it's a warm night, but during cool nights it can be fun to sit around in the candlelight and sing to the acoustic guitar. =)


Mine is posted...HERE You'll need to scroll down below my Thursday Thunks Meme answers to find my THIRTEEN.

Have a TERRORific Halloween. [Don't forget, I want to see a photo of you in your party costume]

#1 is one of the reasons why I no longer answer my door.

Have a great Thursday!
http://iamharriet.blogspot.com/2009/10/did-you-know-that-scariest-part-of.html
You should join us on Monday for Monday Mayhem.

I haven't had much trouble with Jehova's at my last 2 addresses, although one did hassle me in a parking lot right before we moved. It was fun being able to just drive away.

I've gotten good at reading by flashlight and we always keep spare batteries on hand. This is what we get for living in a tornado zone.

I have never had a JW knock on my door.

One time my husband and I were watching a scary movie, and right at the scariest moment a drunk guy crash his car in the ditch outside our house and came knocking on the door (did I mention it was about 1am) you have never seen two people jump so high in your life!!!

When the electricity goes out, I usually read by flashlight and my husband usually complains loudly :)

I wonder why the light always goes out when it's something exciting or interesting to be....? *giggles*

What a hoot. I feel like I just visited you and saw it all too.

What a week ;-)
Thanks for the chuckles.
Hugs and blessings,

Your experience with the Jehovah's Witnesses reminds me of a lady in my first parish. When the Witnesses came to the door with two kids she grabbed one of the kids and said " Your going straight to hell if you believe like your parents." They left in a hurry.

Oh Gattina, number 10 seriously cracked me up!
Sorry you missed the rest of your crime story

I agree with you about no television. It's so boring sitting there in the dark and do nothing.

ROFLMBO!!! I would have bought the wine! LOL! (welllll... maybe!) Jientje arrived safely and we have been sooooo busy - the fun just has not ended! We have another busy day tomorrow! And maybe next day too. I DID give her your message! :)

THANK you for rebuking Jehovah's Witness for dragging those children around! THAT should not be allowed. They were probably in training... *sigh*

Funny! But i am wondering...does this mean that when the most amorous years have gone by, we should thank our lucky starts for batteries?? Hehehe

You made my day Gattina! I've been laughing, smiling and giggle...bringing the children door to door "evangelize" is not just cool. I want to believe it's against every child's right!