GETTING A NEW GERMAN PASSPORT

After 10 years I needed a new passport. It had always been very easy. I went to the German Embassy in Brussels with new pictures and my old passport, filled in an administration formular, payed 50 € and got it after 6 weeks because it was done in Berlin. Then I could travel again in peace all over the world. But it has changed. They became complicated even more than my parents' generation which made easy things complicated with their famous "German efficiency".

I had to ask for an appointment to get a new passport, 3 weeks waiting time !!

I needed a birth certificate ! I told the guy on the phone that they should know that I am born because I already have a passport. He said the rules are not invented by him but it is a new law. I told him that I was born in the middle of WW2 in a bunker in Frankfurt and that I had spent my first night in a drawer and that I wonder if there was any employee at that time filling out birth certificates. I knew that it was in my parents family book, but no idea where that was ! He suggested me to go to Frankfurt to ask. Now Frankfurt is just right around the corner only 550 km (342 miles) away and I have never been there since I was born. I asked him if I could check that with an Internet page or telephone, but he didn't know ! I wondered about his IQ.

I also had to bring my family register book to prove that I am married. I told him that this is also mentioned in my 10 year old passport. He answered that he needs a proof that I am still married to the same man. I said yes and after 40 years I certainly had no intention to change it could only get worse. There was a silence and then he asked me if I wanted to keep my name, or maybe have a double name he suggested ? No I said, I keep my name and that's it. I started to loose my temper.

Then we came to the passport picture. He proposed a list of photographers in Brussels and I asked with a smile in my voice if he gets a commission on them, because we also have photographers in Waterloo. He wasn't pleased.

The photos had a 2 page long list of rules. How you have and don't have to smile, how you have to wear your glasses, that your eyes should not be closed (???) that you are not allowed to wear something on your head, except the muslim women, but there also were rules. The color of the background, the pixels and the most important your nose has to be in the center of your face. Have you ever seen somebody who wears his nose on his forehead ?

Why is it so complicated to get a new passport if you had already one for such a long time ?? I mean I could understand if I was dead, and I needed a passport to the paradise, but that's not the case.

After this interesting telephone conversation, I just dropped in the next chair and pushed a deep sigh. Three cats wanted to know what had happened. 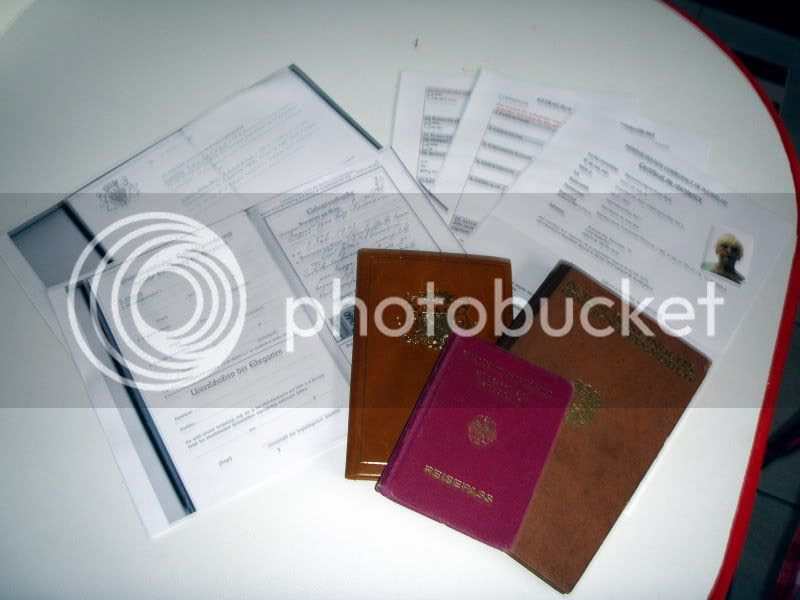 below is more about my birth certificate
Posted by Gattina at 05:57

I have a theory that the bureaucrats have nothing better to do than to make life difficult for us ordinary mortals. Looks like they've succeeded in Germany...

What a fuss. Sounds like it is not only Germany read Jo's post she is having similar difficulties in South Africa. What a coincidence two of my blogger friends having the same problem miles apart.
Jo's post is here:
http://memorablemeanders.blogspot.com/2009/07/plot-thickens.html

Isn't that something? Like you said...if you have proof of who you are with your "old" passport, what's the big deal. I think they all need to justify their jobs.

roflol, funny yet i can feel your frustration..they are all diots...sorry but they are!!

WElcome to how Americans are already being treated- you can thank the muslims and 9-11 -- welcome to the new world! Its called the real world thanks to the terrorist idiots! Freedom- what freedom!
KDC- USA

Oh Gattina, scream aloud and roll on the floor with laughter. I genuinely LOL'd at your post. (Your birth certificate considering the circumstances of your birth!) It's hilarious. Oh and all the other comments. We seem to have the same problem worldwide. I thought it was only SA because of all the fraud that has been going on for years now countries like the US and the UK don't want us to visit them unless we have GENUINE passports. But I, like you, have an existing passport- have had for the past forty years. *Sigh* Thanks for visiting my blog I'll be here often - I see you also love cats. Jo - South Africa

You did a very good job of making a ridiculous situation very entertaining for us readers!! I give my hearty congratulations to the Germans because I think they have managed to exceed the Americans in making the process more complicated - and thats not easily done!! As far as I know they except my existing passport as proof of identity. But please don't tell them if they think the Germans are getting ahead they may change the rules!

How much do they charge now for a new passport? Is it still 50 € or have they increased the fees?

I think it's the same all over Europe. I had a nightmare trying to get a new Greek passport a couple of years back, not least because the regulations for passport photos have changed and a photo from a photo booth is no longer acceptable. It took me two trips to the Greek Embassy in London before I gave up, travelled to Greece on my expired passport and had a new one issued there - photographs taken by an accredited photographer.

It was all worth it though, as the new passport looks really swish :-)

It's the fault to ... Bureaucrats for sure!
why do easy ... many people would loose their job!!!

lucky you- you only have to deal with this (also know as deutsche Gründlichkeit) every 10 years .. for those of us living in Germany, it's an everyday life living with the rules *wink* and of course the many exceptions .. Ordnung muss sein :O)

that paper with the must not do with the passport picture is hilarious .. you must post it in the blog..

And we do pay taxes for these guys.
Unbelievable.
Summerjob?
Well, I had a summerjob in 1967, in Paris. After 2 weeks I was put in the front desk to welcome and advice customers needing houseloans.
I had to learn French and understand the french moratage systems.
There was no complaints, only: Messieur 2R, Vous etez un tres bon representant pour Societe General.

Passport photos these days is so serious I can't believe it.
At the control on Airports, do not smile. They can take it for an attempt to bite the officials.

By the way, we are passing not very far from you on Monday, July 27. Leaving from Essen in the morning and heading for Issouden, where we will stay with old friends from July 29 to July 31.

The route will be Achen, Liege, Namur and into France.

The kittens seems to be very well, so on Tuesday, Ja, dann will ich viele photos publisieren.

And STILL it sounds easier than getting one in the U.S! I couldn't BELIEVE what we had to go through to get Krysti's -- and then to wait in line for nearly 13 hours!!! AND THEN still have to wait 6-10 weeks to receive it in the mail! OY!

Great post on a frustrating theme. We've had letters in our local newspapers just recently about the ridiculous things people have had to go through.

When did the concept of 'serving' the public change to 'obstructing' the public? Seems there's an epidemic of it in so many areas.

Our passports are valid until 2012 but perhaps we should begin the process now?......lol