When I opened the window yesterday morning to let some fresh air in, I saw our neighbor's dog Yanouk on the sidewalk. When he saw me he came under my window, looked up and waved happily with his bushy tail. Now Yanouk is a "little" bearnese mountain dog composed of 60 kg (132 lbs) of love and kindness. Apparently my friend Domi wasn't there and Yanouk had found a hole to escape the garden. 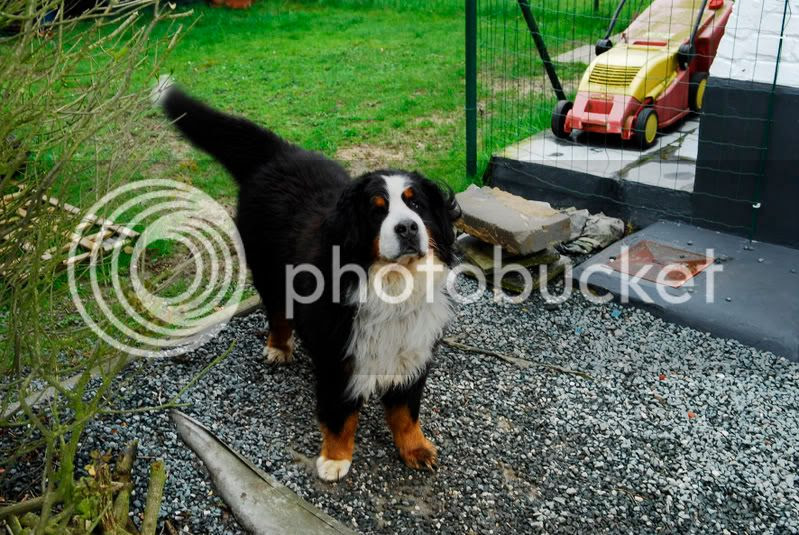 I quickly ran downstairs in my Egyptian red velvet long homedress, uncombed and with my orange slippers. When I opened the door I was pushed inside by a very friendly tail waggling Yanouk.

I took him by his collar and pulled him outside, I could hardly let him in I am not equipped for such a big dog and I thought I better put him back in his garden. That's what I thought but not Yanouk.

As soon as he was outside again he sat down and gave me this hard breaking look out of his true brown eyes. He didn't move. I pulled. My hairs were standing up, my dress blow in the wind I pulled so hard that my bottom nearly touched the ground. Yanouk smiled (at least I had this impression) I gave up. As soon as I stopped pulling he got up and jumped joyfully around.

I went inside and looked for a cord. Of course I had no leash. I found one (orange too) and fixed it on his collar. Yanouk was pleased he thought that we would go for a walk and pulled me in the right direction. But I stopped at the gate of his house, opened it and let him in. He wasn't pleased at all and looked at me as if I had abandonned him in the middle of a desert. I checked the gate and fixed the metal wire again which holds the gate together or at least should. I said good bye and freezing returned in my warm house, with the feeling that I had done a good action. 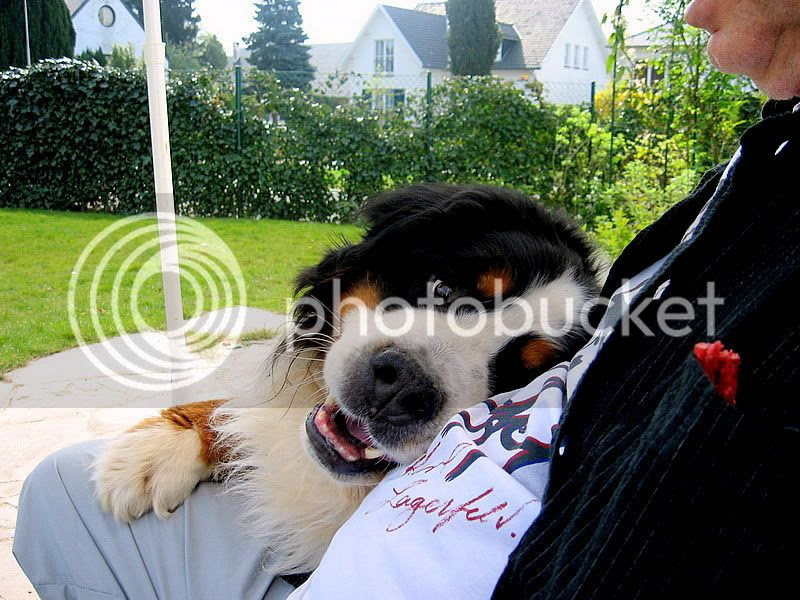 Yanouk (the belly belongs to Mr. Gattino)
Posted by Gattina at 06:00

And therein is a dog's tail...er...tale. Poor Yanou, he wanted some company and you just kept locking him up in a lonely yard.

Hi, I'm a first-time visitor (I'm always interested when I find other bloggers who are in their 60's like me!) and I really enjoyed this story. Having had many dogs over the years, we have had similar experiences. And the picture of him with your husband is priceless! What a sweet face!

I love it! He should meet George. George would show him how to escape from gardens.

Adorable, just adorable. I am glad he will be safe in his garden again...he's too adorable to be running around lose!!

I had to laugh when I read of your trying to pull the dog because Maggie does that to us often. She goes half way out the patio door and then stops. You can't move her back or forward by pulling. You have to offer her a bribe.

aw... he is so sweet, such a big dog, i wonder if he gets along well with your cats.

He's so cute! And obviously very friendly wanting some company. Feeling lonely the poor one.