When I was a child I never had heard of a Santa or a Father Christmas. Under my Christmas tree the Christkind (Baby Jesus or Christ child) had put the gifts and then flown away through the open window. I only learned about him when I became mother and had a child of myself who started to talk about the Père Noël which means Father Christmas in french.

I then found out that Father Christmas is a name used in the United Kingdom, Australia, New Zealand, and several other Commonwealth countries and the USA, for the gift-bringing figure of Christmas or Yuletide. He also exists in France, Spain, Portugal and Italy. Today Father Christmas and Santa Claus are often used synonymously, but historically the characters were different. The use of "Santa" instead of Father Christmas is an Americanism. It originated from Dutch settlers' stories about Sinter Klass, the Dutch name for St Nicholas, and how he gave presents to girls and boys. Santa Claus is the American pronunciation of Sinter Klaas.

The personification of Christmas as a merry old figure begins only in the early 17th century. He was created jolly and "old" because of the antiquity of the feast itself.

The earliest recorded personification of Christmas was in Ben Jonson's (a poet and writer) play "Christmas his Masque", dated from December 1616. in which Christmas appears as "attir'd in round Hose, long Stockings, a close Doublet, a high crownd Hat with a Broach, a long thin beard, a Truncheon, little Ruffes, white shoes, his Scarffes, and Garters tyed crosse". Nothing to do with the Santas we see nowadays especially the "thin beard"!

From there on during 250 years, "Santa" appeared as Sir Christmas, Lord Christmas, or Father Christmas which became the most common.

It is rather disappointing to learn the origin of "Father Christmas" or "Santa" when you consider that he only exists because somebody has created him for a play and Coca Cola invented his today's image ! 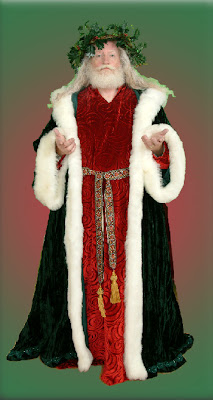 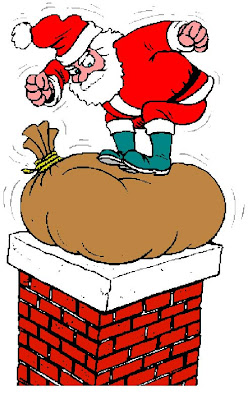 I have got this award from Hootin Anni and thank her very much ! I only hope she will not be too disappointed when she reads her beloved "Santa's" origins. She is such a big Santa fan !
Posted by Gattina at 07:15

Since I don't believe in Santa anymore, it isn't that shocking to hear about the real origins! It is indeed very interesting. We take it for granted, I grew up with Santa (called by Chileans "the Christmas Man", in Spanish, of course) and they still wear those heavy red clothes even though it is 30ºC/85ºF at this time of the year in the Southern hemisphere!
Traditions are to be treasured...

Gattina, Gattina....you think me being the lover of Santa as I am, didn't know this history. I did...and I do. I even know his name in several languages and the origins in several cultures. I think the very first Americanized drawing of Santa was done by a guy named "Nash" or something there close. Thomas Nash I believe....and he had him depicted as a North Pole resident in his drawings. It's all so very interesting how one 'person' [or saint] can become such a legend.

Here's something you didn't know tho...my SANTA IS from the North Pole...he was born just outside this area AND near his home place there's a special American Government compound that TRACKS him each and every year!!

Here's where he was born [really, this is my hubby's birthplace - a few miles from here]

Here's where they track him every Christmas Eve. [it's very close to my Santa's -hubby's- birthplace.]

It's been said that the north pole was situated on Canadian soil. However, the magnetic north pole is constantly moving. At present, it is moving away from North American and toward Siberia. There is no east and west if you stand at the north pole - everything is south of you.

Santa lives at the north pole. It is basically not land, but ice and recently water has been spotted there. Wonder where Santa will move his village if the ice melts?

Just a bit of trivia for everyone to enjoy.

Well, we are all big fans of the Santa Claus... but I never knew he "personified" Christmas. Christmas is the celebration of Christ's birth - or the Christ Mass - and St. Nicholas was just a kind old man who liked to make people smile! Somehow the two got intertwined. So, I don't think that Santa, Saint Nicholas, Sinter Klaus or any other little chubby joyful bearded man actually personifies Christmas... He has just become a symbol of the holiday. At least that's the way I've always been lead to believe it!

Hi Gattina! This is a very interesting post. It's true that Father Christmas and Santa are are often synonymously.

Off topic, I have tagged you and I hope you're up to it. If not, I understand. It's up at http://mlizcochico.blogspot.com

The common north American image of Santa Claus was fixed in our minds by the poem "'twas The Night Before Christmas", which I even learned by heart once.

Don't listen to those Americans who claim Santa as theirs. Santa is a Canadian, living at the North Pole (Canadian territory) The Canadian post office even has a postal code for him, HOH OHO. They deliver mail addressed here and then return a personal letter to every child who wrote. Just 1 1/2 hour drive south of where I live is his summer residence, Santa's Village.