The Prince of Wales raises £1/2 million ( 750.OOO €) for farmers ! The Prince of Wales has raised over half a million pounds for British farmers directly affected by the latest outbreak of Foot and Mouth Disease. What did he do ?? Did he sing ? Or performed as Romeo in a theatre ? He certainly didn't raise his wallet.

Princess Mathilde meets pint-sized performer at the ballet
The 33-year-old royal, elegant in a red satin creation, spent time chatting to the excited youngster who had greeted her with a bouquet of blooms and a kiss as she arrived, with husband Prince Philippe, at the theatre in Ghent. Ah our princess ! She is a nice girl everybody loves her in the country. That's not like her husband the sleeping pill ! When people are suffering from insomnia they just listen to a recorded speach of him. That's better than all sleeping pills. And it had become already better since his marriage because she was a speach therapist !

Being plucked from a hum drum existence by an enamoured movie star may be the stuff of daydreams, but for Sarah Larson it became reality. Three months ago the pretty brunette was serving cocktails in Las Vegas for a living, now she is the envy of women everywhere - as the new love of Hollywood hunk George Clooney. Despite being hurt in a traffic accident last week, George's new girlfriend Sarah was not going to miss her man's big night - hobbling along with a brave smile That's bad ! I am sure the tissu industry will make the big business and an enormous sales increase to dry the tears of all women in love with him ! I will use a kitchen roll, that's more economic.

Pamela Anderson is about to marry again, according to US reports. The actress, 40, and fiance Rick Salomon are said to have applied for a marriage licence in Las Vegas over the weekend. That's certainly better for this guy at least he has the hands full with Pam not like Paris Hilton with whom he had been before.

Man, 24, weds 82-year-old bride ! A 24-year-old man from northern Argentina marries a 82-year-old woman.The groom, Reinaldo Waveqche, told reporters after the ceremony in Santa Fe, northern Argentina: "I've always liked mature ladies." Ah !! We don't have to give up hope to "remake" our life at 80 with a young handsome man ! and he didn't even look for money ! Isn't that nice ? I think he must have a grandma complex instead of an Oedipus complex. I just wonder how I would look like in a white wedding dress at 80 ??

A Russian woman has given birth to a baby weighing 7.75kg (17.5lbs), more than twice the average newborn weight. The "little" girl, Nadia, was delivered by Caesarean section at a hospital in the Altai region of Siberia. Thats something for the Guiness Book ! And the poor parents certainly couldn't use the usual first baby outfit !

The Vatican has warned Roman Catholics that buying relics is sacrilege, after reports that pieces of former Pope John Paul II's clothes were for sale online. Girls ! listen ! you can buy now the underpants of the pope on Ebay !! Watch out ! Buy it before he will be beatified ! then the prices will increase tremendously and maybe they ran out of stock !

.
Men with deep voices tend to have more children than those who speak at a higher pitch, scientists say. Oh my God ! am I happy that the pill exists otherwise I would have at least 12 children !

A Saudi Arabian man asked for divorce because his wife had watched a TV program presented by a man. His motive was that she is not allowed to be alone with a man in one room. That's true ! I never thought about that and I am sometimes undressing in front of the TV screen ! Now they all have seen me naked !

The American Marine announced that they will invest 600.000 dollars to modify one of their barracks in California. They had realized that with Google Earth it looked like a svastika seen from above. The architect hadn't realized it when he made up the plans. What a scandal and all this because of Google ! Now they have to demolish the thing and built it up again. How would the new barrack look from above ? As a smiley ?

Clinton's cackle may give opponents the last laugh
They call it the Clinton cackle. It comes out of the blue, lasts a few seconds and leaves those who witnessed it wondering if they have missed a joke. Hillary Clinton's deployment of the full belly laugh is the latest weapon used by the leading Democratic presidential candidate when she is being pummelled by reporters or rivals. I like that lady ! I do that too ! It's much better then giving stupid answers which goes as jokes around the world as some politicians do !

Gran has twins for daughter
A woman of 51 who acted as a surrogate mother for her daughter has given birth to her twin grandchildren. Rosinete Palmeira Serrao had two healthy boys by caesarean for her daughter Claudia Michelle De Brito, 27. Oh, what a chance that I have a son and not a daughter ! 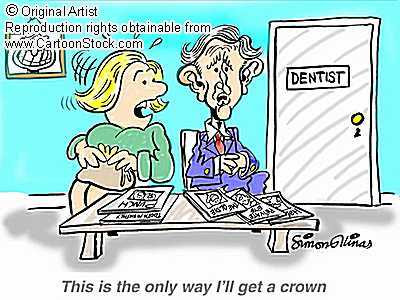 I read about that huge baby!!I am glad my boy was 3.4 kg/ 7 pounds!
Love the cartoon! every dentist should display it!

Those are wonderful. But do be careful. Mrs Clinton is not the sweet smiling lady she appears to be. There was a good reason Bill had Monica in the Oval Office!
Such scandal! LOL!
Two 9 pound babies were enough for me.
The cartoon was great too!

Ummmmmmmmm, just WHAT is Rick Solomon's hand gonna be full of?!! It's hard to say with Pam, right? *giggles*

Hm... well, I had heard about all 3 babies... no news there for me! But I now know WHY I have 4 children rather than the 2 planned... I'll pass on the Pope's boxers... I doubt they would bring Hubby around...

What a composition !!!!!! I really enjoyed here rather sticking my eyes at news paper....

You gave a mixed bag.... politics, movies, general... This is really healthy....

I love your irreverent comments to those news items, Gattina. But, you didn't mention that Elizabeth Taylor is marrying for the ninth time...to a guy 34 years her junior. Is it the lady's money...or does she have a secret weapon of some sort...like a feminine version of Viagra!!

As for that huge baby...that would make one's eyes water.

Hillary laughed when her husband, the President, was out having sex with other women. She must know something we don't.

I can't imagine having a baby that weighed so much! We struggle for my son to gain weight...and he's only a little over 20 pounds at two years old!

I love your take on all the news!

And I love George Clooney!