I didn't know that Americans have a Labor Day, but I learned it on Mo's blog. I then conclude that they are working only one day a year when it is "Labor Day" ! I think we should introduce this day here too.

But as we have no "Labor Day" now, I thought about my personal Labor Day. That was 34 years ago. The birth was foreseen not by a clairvoyant but by my gynecologist for the 20th August. As I was feeling like a fish in water and had no problems at all, I worked until the 19. In the 70th it was possible, today you have to take 1 month before and 2 months after birth, maternity vacation, payed of course. I preferred to take these 3 months after the birth I thought my baby would need me more then and not right now.

The 19th late evening I suddenly felt a sword crossing my belly and thought that must be it, the contractions arrive. I called my doctor. He told me to watch the time between the contractions and when it's all 10 minutes I should go to the Hospital. How to kill the time now ? We played a game, I don't remember what, and I counted the distance between the sword crossing on my watch. At midnight sharp it was time ! At least my child would be a very punctial one ! It was the 20th as foreseen.

We drove to the clinic and then I had to lay down on a bed and admired the ceiling. When the contractions arrived I panted like an old dog as I had been told. But then I got hungry. Very hungry called the nurse and asked for something to eat. The poor girl was shocked she told me that I was in labo(u)r and not allowed to eat, I could throw up. Now I got furious I was hungry and I wanted something to eat. Finally she had enough of my lamentations and arguments and gave me a slice of bread with jam. I think I never had such a good slice of bread ! I munched and panted until the doctor arrived and now he got furious. He screamed at the nurse but I stopped him and told him it was all my fault.

In between the baby had decided to change position and instead of a diving position it just sat up. An X-ray was done (there was not yet echographies) and I very much hoped to know the sex of the child. Of course it started already inside my belly to make me angry because it held his leg just in front of the critical point. So I still didn't know, was it a boy or a girl. But I had to have a ceserian.

With all this my labor had stopped, they took me in the operation room and knocked me out. Apparently I gave birth but I don't know how. Anyway when I woke up, I saw my husband's face above me and he whispered : "You have a little boy !" I don't know what I answered but he still tells me that today ! My answer was "Have you fed the cat ?" 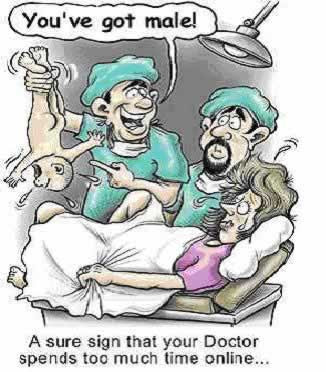 LOL at the ending. What a great labor story!!

Well you did the hard part, he should have to feed the cat. :-)

LOL, great "finale", applause!
I had 6 weeks off work before the estimated delivery...it was a legal thing (in Germany) and I was bored to death 8 weeks long because all my friends were busy working and my son was 2 weeks late. I had a year off afterwards. But still no cats!!

Great story!
I sure have missed you!
Huggles and Love,
Raggedy

LOL! I always DID think Labor Day was more about US than any employment anyway! Labor Day... Mother's Day -- it's all the same - right?

Very cute story, Miss Gattina! My hooman mommy needed a c-section to give birth to my hooman brother, too.

What a wonderful story, Gattina! It starts my day off just right, with a laugh!

Most Americans have a day OFF from work on Labor Day. But since I work 6 days a week anyway, here I am at the store, working...

OH, that's my kind of mama, thinking of eating even when in Labor!!! *giggles*

That is a wonderful story, Gattina. Happy Manic Monday.

my 3rd one was a long ordeal, as she was coming the wrong direction.

When she finally arrived my hubby cried.
I asked him if he was so disappointed that we had another girl. "No," he answered. "I'm just glad it's all over."

Funny, the things we recall.

Thanks for sharing your wonderful story, Gattina. It´s amazing how detailed we can remember the "giving birth" labor, isn´t it? My mom remembers everything - from her last meal (strawberries with cream) until I was finally there (Steisslage).

My wife and I did "prepared childbirth" and took the classes ahead of time. On the day of labour We had a student nurse with us who knew nothing, must have been the first day on the job. When asked to time the contractions she timed the length of each contraction rather than the time between contractions????? I did the correct timing. Preparing seemed to work, my wife gave birth in less than 6 hours from first contraction to birth, the "little" fella weighed 10 pounds 2 ounces. My wife left the hospital wighing only 2 pounds over her regular weight. Too bad we didn't have more children before she moved on.