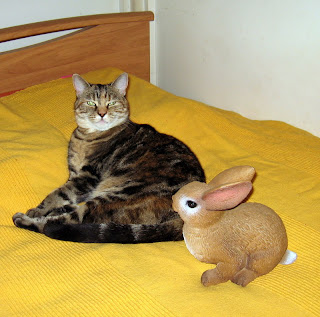 Pookie had no clue that the rapid was not a real one !

There are many things I had no clue of ! For example I didn't know the game Cluedo, which North Americans call "Clue" where players attempt to solve a murder. The solution to the murder requires the three components of Suspect, Weapon, and Room. Sounds quite interesting to me ! Only the weapon bothers me I would prefer poison, that's more feminine.

I didn't have any clue either that your blog can be rated PG 13 "Parents strongly cautioned" because I had written once about an obstructed toilet pipe which had to be sucked out. As before I had described roman statues without penis, they put the two words together and I became a kind of "dirty writer". It wasn't my fault that they fell off with the time ! Whoever does this rating must really have a rather dirty mind ! Please avoid to write about your kids when they suck their thumbs.

The fact when you write about your personal political or religious opinions is not appreciated either. I had no clue of that because I live in a free country where you can say that your prime minister or president is an idiot and should better go to hell, the King is a stupid guy who only costs money or that god doesn't exist and it's all nonsense. Then you can get very unpolite and agressive comments.

In my innocence I had no clue that spams exist and can only admire the dirty phantasy of their creators ! They must be very unhappy and grudging people otherwise how can a human being be such a writing trash bin !

I also have no clue how Mo finds the words for us ! Does he ask his cat to step on a page and looks at the word where the paw is ? Or maybe with his chickens ? Or does he just close his eyes and puts his finger on a text in a book and picks out the word ? I hope it's not a book with antic sculptures where sometimes delicate parts fall off ! Or does he double a car and hear the word &@#$§# and proposes this the next time ? Better ask him ....

And now I am curious to find out of what the other MM members had no clue !

LOL--funny post, Gattina. I often wonder where Mo comes up with the MM words for us to post on. Have a great week.

Geee... maybe Mo will `clue us in`on his method after he reads your post. That would be nice. Good post, Gattina.

Have a happy week... see you along the meme trail, haha.

Whoof, woof. I know what you mean cuz there`s lots a hooman stuff that I dosen`t got clues about too. Bark.

Gday Gattina
Great post. well I knew about Cluedo. but not sure on the rating's or were Mo decides what words,. Ohh I see Pookie not sure about sharing his her space with a rabbit. lol

I had no clue there were other pets in your home other than cats! how did the rabbit get there?did he bring the Easter eggs and decided to stay?

I have never played Clue or Cluedo (your choice), now I have a bit of information about it thanks to you !

great post and pic. sorry that my entry seems to be clueless.

Good morning Gattina!
I think poison was one of the "weapons" in Clue/do, so you would have felt right at home, lol!
I sort of picture Mo with a lightbulb over his head, crying "eureka!" when a (weird)word pops into his mind...
About nasty comments - it seems that some people believe that "freedom of speech" means "freedom to be disgusting to other people"
Nothing one can do but delete comments and pretend they don't exist...
You go on writing what you like!

It IS sad to be clueless in such a clue-filled world! I have trouble myself deciphering this clue from that and coming out on top of them all! Usually I'm buried DEEP in ... clue clutter! :)

Maybe Mo will clue us in on his method of picking themes!

I had no clue what to write and ended up just recycling something I already had.

I had no clue Pookie had such a cute playmate.

Pookie and Rabbit are hardly the stuff of PG13 though Claire tries to hold on to her "R" rating by throwing a word in here and there for the search worms to find.

Yes Jamie, Claire does like her "R" rating doesn't she? Very well done Gattina. You have yourself a wonderful MM. :)

I often wonder where I come up with the words, too, Gattina!
Usually it has something to do with my personal life that just stands out, or I'll narrow it down to a few words and present them to my secret clue-committee to pick one!
cheers,
mo

Very funny post. I don't do manic monday, but I accidentally did the linky thing. Oops.

Thanks for the info on the words that label you PG-13!

I think you more than make up for your "clueless" moments on your blog. Sometimes it's just good to pretend that you don't have a clue to get away with something, it's a good excuse.

Thank you for stopping by.

I am clueless about a lot of things! I used to love playing that game!