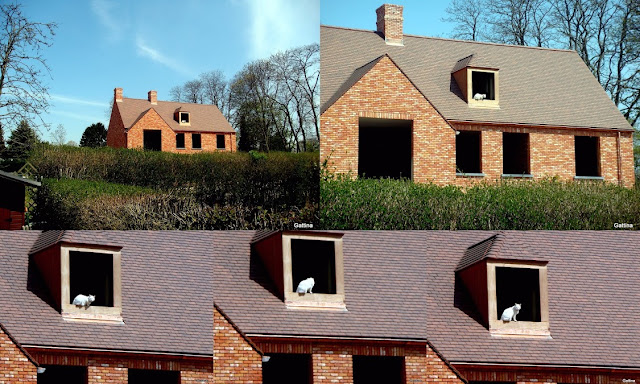 Arthur was the most intelligent and funniest cat we ever had. He entertained us during almost 20 years. Here he checks a house under construction and we were surprised when we saw him looking out of the windows ! 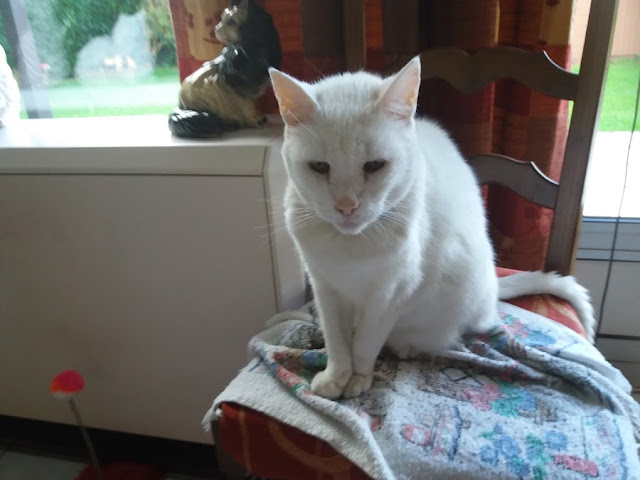 During Saturday night I heard a strange noise, but then nothing anymore, and as Rosie besides making eyes like a full moon didn't move, I turned around and continued sleeping.

When I went into the third bedroom next morning which I use as dressing and junk room, I suddenly knew what had made the noise during night ! the hanging rail had collapsed and all my clothes lay on the floor !

Unfortunately I forgot to take a picture, the whole room looked so messy, I didn't know where to start !

Finally I managed to put up and fix the hanging rail and hang up my clothes ! Anyway it was cleaning day and Maria was busy with taking in the parasols and put other stuff from the terrace in a big box.

I took the opportunity and sorted out my blouses and pullovers and some of them Maria liked and was happy to take them. Now the room looks again tidy !

In the afternoon Adeline my neighbor and I visited Nicole and this time on time ! When we arrived her daughter with daughter was there, it's amazing these two look like sisters and not mother and daughter. Nicole too looked real nice and nobody would think that she has a brain cancer. A part from walking and holding things, when she sits or lays in her bed you don't see at all that she is so sick.

She was worried about her cat, but I told her she hasn't to worry at all, the cat moved into her daughters house and got used to the new home very quickly ! She even seems to be happy that she has found a little friend, the daughter's dog which is a very friendly and loving dog.  I am sure that in a few weeks the boss will be Isis and not dog Nelson anymore ! 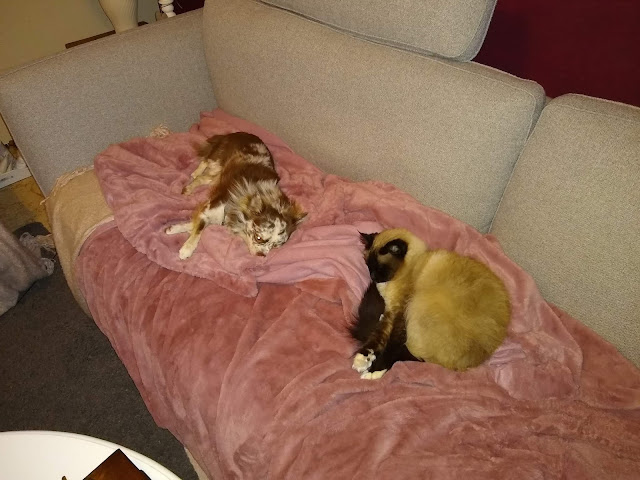 Her daughter had sent me this picture and written underneath : "there is no room for me anymore"

Nicole was happy to see that Isis had such a good home now, she thought that maybe cat and dog would not well go together.

After the hospital we went in a shop to look a bit around, I still needed a cardigan to wear inside when it becomes cool. I found a very nice one looking silvery grey in fleece fabric. Very cozy to wear ! 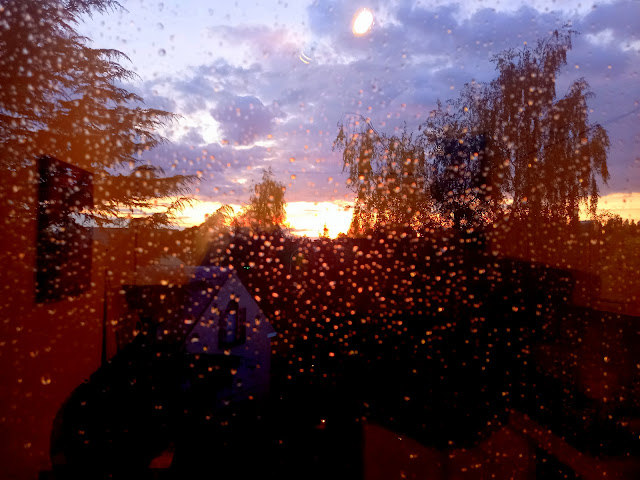 in the evening it started to rain and I saw a beautiful sunset through the raindrops. 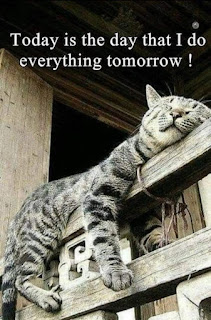 I watched TV, wrote this post and answered some phone calls. Nothing happened, except on the TV screen, and the laundry turned in the washing machine.

It rained the whole day without interruption. Not good for all the announced events outside.

I don't even know what I did except laughing about the adventure my "daughter" Isabelle had with her little dog while walking him in the evening.

Suddenly from nowhere an enormous dog appeared and of course the little dog barked like crazy, which excited the Rottweiler. Isabelle feared for her little dog and thought the Rottweiler would gobble him down so she quickly put her dog on the roof of the next car which was parked on the street.

While she yelled for help and called the police, the Rottweiler scratched the car all around and the little was scratching like crazy on the roof. Isabelle was of no interest to the two dogs.

Finally she managed to find the owner who assured that the Rottweiler was an angel, but the little dog barking like crazy had excited him. She called the big dog who immediately followed her home leaving Isabelle with a witness and they checked the damages on the car.

Apparently the two dogs had done a good job on the new car. Now the insurance of Mr. and Mrs. Rottweiler has to pay ! Poor Isabelle went home and had a shock, that's when she called me. Fortunately all people involved were understandable and friendly and the insurance question quickly settled.  Rottweiler had found a hole in the fence !

At 6 pm I had an appointment with a friend to watch the new movie with George Clooney and Julia Roberts. 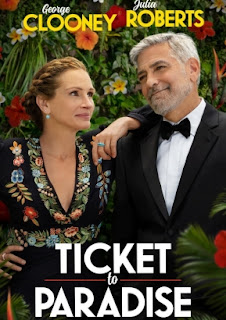 Unfortunately they both spoke perfectly French, the movie had been translated. I prefer when it is the original language with a subtitle. But most of the people don't know enough English. We laughed a lot which suited us very well, the movie was so cute and funny. After the film we returned home, as my friend is in the same situation I was a year ago, her husband has a generalized cancer, so she was happy to have some distraction and I too.